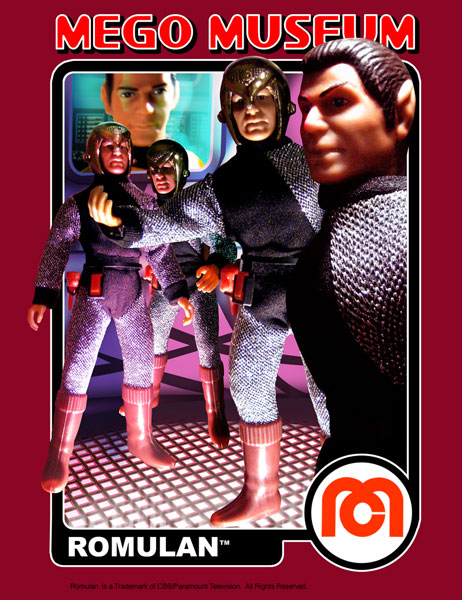 The Romulan (Item No. 51204/1), regarded by most collectors as the best and most accurate Alien made by Mego (with the Andorian always coming in a close second). Regretfully, it is also the rarest. Make no mistake: the Romulan figure is what separates the men from the boys. Mego “Trek” collectors are considered mere poseurs unless they have one of these babies in their set. The Romulan figure lends a kind of gravitas and greatness to a “Trek” collection, in much the same way that the Alter Egos really put the finishing touch on a top-notch WGSH collection. The Romulan also generates about the same level of obsession and angst as the Alter Egos. 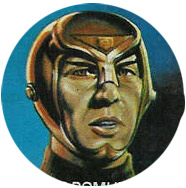 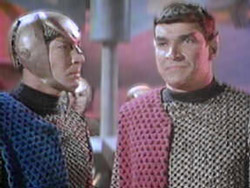 The look of the Romulan is largely based on the appearance of the Romulan Commander (portrayed by the late series veteran Mark Lenard) from “Balance of Terror.” The face sculpt is very close to the actor’s likeness, but the outfit itself is only a shadow of the more colorful one seen in the episode. The figure comes clothed in a bodysuit (with sewn-on belt) made from black and black/silver material (reminiscent of the chain mail fabric used for Mego’s Knights). The body used for this figure is a standard, Type 2, male, flesh-colored one (this is worth noting, since the Romulan is the only one of the Aliens whose body is not a weird size or shape!). 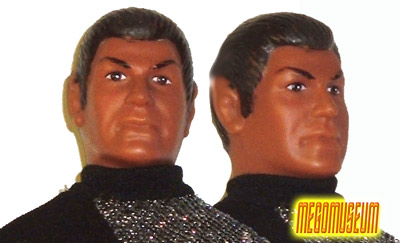 A gorgeous, removable, gold vac-metal helmet sits atop the head, while a pair of brown boots adorn the feet. But even the Romulan, work of art though it may be, was not immune to Mego’s constant economy. He comes with–you guessed it!–the same belt, red phaser and red communicator that the Klingon and Gorn were graced with. At least that’s three accessories that are easy to replace, if you’re trying to complete a loose Romulan. (If you ARE trying to equip your loose Romulan with a red phaser swiped from a Klingon or Gorn, here’s a helpful tip: make sure you get a phaser that does not have melt marks. The plastic of the phaser, when kept in contact with the Klingon/Gorn tunic for extended periods of time, will react with the vinyl, causing the phaser to melt slightly. Melt marks are the tell-tale sign of a phaser that doesn’t really belong to a Romulan (not that it really belonged in the first placeÉarrgghhÉ) 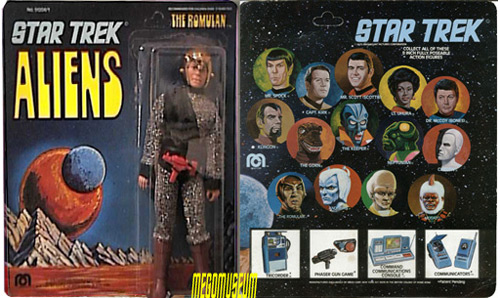 Above is the apple of many a collectors eye, the carded Romulan which only came on this version of card. 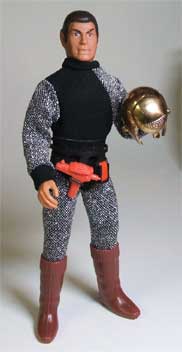 Romulan uses the same weapons belt as the regular Trek crew. The Trek weapons belt has been reproduced by Doc Mego and Emce Toys. Both repro’s are identical and very difficult to spot. The reproductions have a very slightly more rounded look around the holsters, but even that is hard to see. Neither reproduction is marked.

The villian weapon set consists of the same phaser the crew carries, but in red instead of blue. They are cast in the same color red as the communicator. The phaser has been factory reproduced by Emce Toys. The repro is a brighter red, the lines on the smaller phaser attachment are a little wider on the repro, and the post near the back/top of the phaser sticks up a little higher. The main body of the repro is a little wider, and the handle is just a touch more narrow, which makes the repro not stay in the holster on the belt. The Emce is marked with the number 7 printed on one side of the handle. What can be confusing about this mark is the repro phaser has a 7 on the handle and the original does not, but the repro tricorder is unmarked while the original has a 7 printed on the backside. Bascially what that means is the 7 mark does not mean repro on all Trek items. 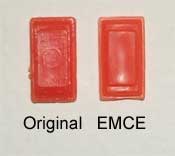 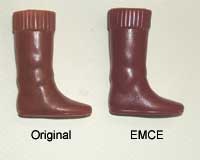 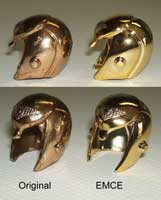 Romulan’s helmet has been factory reproduced by Emce Toys. The reproduction is pretty spot on in shape and size. The only real difference is the nose guard is a little wider on the reproductions and the points near the chin are a little sharper and more defined. The biggest difference is the color. An original gold helmet borders on the bronze side, while the reproduction is about as gold as you can get. Another telltale is the obvious, age. A loose original example is bound to have some kind of flaw in the finish, it is afterall a 30 year old toy and loose the finish has had no real protection. The inside is another telltale. The repro is gray on the inside, while an original is brown. The repro is unmarked. 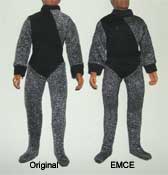 Romulan’s suit has been factory reproduced by Emce Toys. The repro suit fits more loosly and is made of a softer material so it appears a little more baggy than an original. The belt on both are made of a velvet type finish, but the original fits snug on the body and is stiffer material. It has a white mesh on the backside. The repro belt (both are sewn into the suit) is black on the backside and is much looser. The collar on the repro is wider and doesn’t fit so tightly around the neck. The “chainmail” pattern on the repro is in a horizontal pattern almost giving the repro suit an appearance of stripes, while the original pattern is diagonal and more diamond shaped making the silver color more dominate than it is on the repro. The Emce suit is unmarked.

Romulan’s head has been factory reproduced by Emce Toys. The reproduction is slightly overall smaller in size. More in the face than the hair, which makes the repro look like the hair is just a bit taller than the original. The hair and eyebrows are painted slightly darker and the eyebrows are painted thinner. The repro is made of a firmer material so the head is a little harder and it is marked with a 2007 CBS copyright on the back of the neck.

Emce toys made an accessory for Romulan that wasn’t present on the original figure. A red tricorder, made exactly the same as the blue tricorder the crewmembers wear. We don’t normally mention parts that were not on original figures, but this could cause confusion with new collectors down the line. The red tricorder was never made by Mego, so an original Mego Romulan will not have one. It is only available on the Emce re-issue.