There are no items in your cart.
Browse Products »
CRAWLSPACE 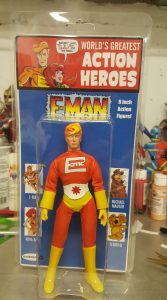 E-Man is a classic comic book character, who debuted in his own series from Charlton Comics, during the original Mego Toys era.

After SELLING OUT at New York Comic Con in 2015 and Mego Meet 2016, here is your chance to own the Official E-Man Limited Edition Action Figure!