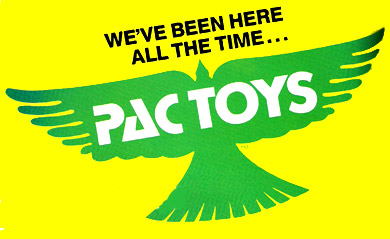 Little is known about PAC Toys " there has been a great deal of collector speculation over it's role in the toy industry and what part it played during the final days of Mego. Many Mego collectors would be interested to know that PAC tried to save Mego and even bought it in order to keep it and it's people going. Recently, the Mego Museum was lucky enough to get in contact with Mr. Joe Ruzzi, the founder of PAC toys, who gladly shared his experiences and helped to clear the air on some misinformation that abounded     Pac was founded by Mr. Ruzzi in 1972; the company was originally called "Manufacturers Assembly Services (MAS)" and had large contracts producing antennas. Assembly work was hard to obtain as Hong Kong had became the talk of the industry, things were difficult but a clandestine lunch changed the future of MAS forever.

The Birth Of PAC Having been detoured on a delivery, Mr Ruzzi did something against his nature, he went out to lunch, unknowingly he chose a luncheonette next to the toy buildings and 1050 Broadway.

As Joe explains"Two very well dressed gentlemen came in and sat beside me, they were talking about Hong Kong and one of the gentlemen was really upset. He said if I could find one domestic factory to do his assembly he'd give it to him tomorrow." Joe Realized a Golden opportunity"I blurted out if I Could find one manufacture that would give me work I would take it today. We all laughed, except when they got up to leave the gentlemen that passed the remark told the other guy to "stay and find out about this guy" meaning me. " 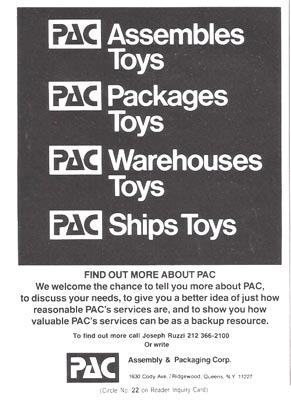 It turns out the two Gentlemen were Remco's VP of Manufacturing Mel Levine and Arthur Stein, the owner of Carrier Container.   Stein and Ruzzi formed PAC (Packaging and Assembly Corp) less than one week later, their first contract was had by Month's end producing Energized Spiderman dolls and Helicopters for Remco.  Stein would leave PAC early on to develop his own rack display company but PAC forged on to work for just about every player in the toy industry including Coleco, Knickerbocker, Ideal, Tri-Star Toys, Cox, Revell, Kenner, Matchbox, LJN and of course, Mego.  PAC was a tight ship with over 2,000 employees, Joe's door was open every Wednesday to employees, when he moved PAC from the Bronx, he gave all his Bronx Employees free bus transportation. Cash bonuses of $500 were handed out to the best line worker (there were sometimes 15 lines running at one time). Pac was a great place to work.

When it came to Mego, PAC toys was already an established company by the time their relationship began as Joe explains "I was their primary domestic manufacture & factory. I replaced their factory in Bohemia N.Y."he adds " As a matter of fact I had already spread out to 6 plants with over 600,000sq.feet and looking for space".

When Mego began it's final slide, it was indebt to PAC for 2.4 Million and Joe devised a plan. "I would employee the remaining employees for their present salaries at Mego, use the same vendors and help them by paying cod" He adds" But what really sold the deal was that I would hire national Sales reps. Mike Bauer(Sales), Pat Sirkus and financial whiz Jim Groberg. [They] were the only powers left at Mego"

Jim Groberg, helped push the PAC/Mego relationship through in bankruptcy court, through the deal PAC would receive all molds, tools, dies, artwork, trademarks, copyrights and new product. This included any licenses of value (including the Micronauts). Joe's Wife, Linda Ruzzi (of LR Associates) was the force to get all the existing licensing for PAC from both Mego & Takara at the time,as well as all of Mego's existing domestic licenses. The Bankruptcy Court approved everything as Joe mentions "Back then this court would do anything Mego asked." A common misconception was that Former Mego Chairman Martin Abrams held a position at PAC Toys as Joe elaborates "Marty never had any involvement in any of my businesses and at no time did he ever know what was being done in R & D." Abrams and Ruzzi did get together briefly to form "Phoenix Toys" which produced three products "Fabulous Felines" (A line of dolls made to resemble the play Cats) "Charlotte Rouse" (A line very similar to Strawberry Shortcake) and "Shaboom Magic" (A line of Magic Kits) The partnership was brief however as Abrams quickly went on to form Gentile Abrams.

The Creation of the Lords of Light The creation of the Lords of Light came out of a fishing trip (on his 65 foot Viking named "Lady Linda") as Joe explains, " I was doing work for American Cyamide, they had the Light sticks and nowhere to move them except the Navy" He adds "My two sons and some friends were Fishing on my boat, when Brian the younger boy, was putting (forcing) a large light stick into the body of a one of his toy figures" This was an advantage to Ruzzi who was designing a toy line based on the Micronauts tooling but was reluctant to use the name as he explains "at the time,[Micronauts] was though as closed out merchandise"  Ruzzi struck a deal with American Cyamide for the exclusive licensing rights to use any type ,size and color for toys and retail product domestic and international.  While "ou head would spin if you knew the product that the Lord of Light line was preparing to developed and manufacture for the following season."

Lords of Light was a stylish toy line that embodied much of what 80's toylines were about.  Unlike the Micronauts, it had a back story as the Heroic Izzurians (Izzur is Ruzzi spelled backwards) battled the vicious evilites.  The line was to feature a series of heroes, villains, playsets and vehicles all retooled slightly from Micronaut molds.  Role Play items such as a glow in the dark sword and a huge Ride on "Sonic Space Rider" (based on the Micronauts Solarian) were also to be included and actually may have been produced..

But unfortunately the curtain fell too quickly on PAC for the Lords of Light to get a proper launch :

Eventually, Joe Ruzzi faced an investigation and criminal charges stemming from PAC's billing practices. "I was guilty of intermingling corporate funds, pre-billing factories on merchandise already assembled and ready for shipment and inventoried," explains Ruzzi. "Who knew at the time you couldn't do this? As far as I was concerned, I owned every thing 100%... and besides, I had accountants. Well, by the time they realized that I couldn't do this, the damage was done. "

His conviction proved that PAC was inextricably tied to Ruzzi himself, and PAC didn't survive his absence from the company. "The problem was that my company was planning to go public that September, and they all wanted in - banks, factories, investigators and every close-out artist around. None of these people wanted me or my money. They wanted me out, and of course they could do 'better'. The problem was not money, but that somewhere someone decided that I was going to jail and the company would be theirs. Funny, but what they didn't realize that *I* was the company. By the time they did, most - if not all - of my customers decided not to deal with this new entourage of self-unproven success stories." 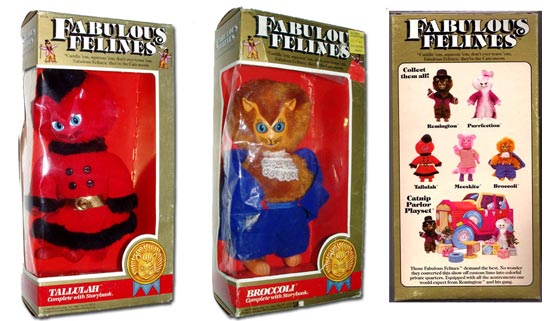 Looking back at PAC, Ruzzi's tale is much like the classic American success story. "I came from the Bronx, a lower middle class hard working father, to the 116th best-ran company on Long Island - doing almost $40 million domestically and $15 million overseas... and now it was gone. Kind of like the first shuttle that exploded. Unthinkable, eh?"

The "PAC Toys" Gallery would not have been possible without the fantastic contributions and assistance of Mr. Joe Ruzzi, Ray Miller and Laurie Halbritter.