Mego's "Eagle Force " line was truly a symbol of the times, the early eighties and the election of Ronald Reagan brought about a rise in patriotism and "law and order" that had not been seen in over a decade.  Military toys were about to make a comeback and Mego wanted to be on top of the market place.  On the other side of town, (well in Rhode Island) Hasbro was planning a similiar comeback of on their more iconic characters, that of G.I. Joe.  Despite being developed independantly of one another, similiarities arose between Eagle Force and G.I. Joe with the major difference being the scale of the figures. 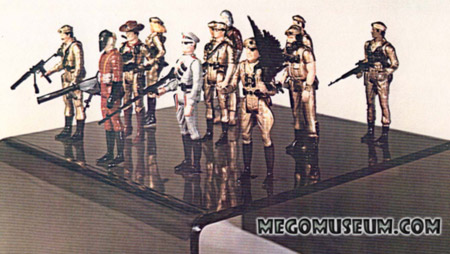 According to the official Mego Intro piece Eagle Force was created by the US Goverment to tackle R.I.O.T ( Roving International Organization of Tyranny). a terrorist organization that was driven by world domination.  Eagle Force was assembled from the finest of the US armed forces.  Led by Captain Eagle,the eye patched Eagle commanded a group of military experts with codenames such as Big Bro', Harley, Turk and The Cat.  R.I.O.T was lead by the evil General Mamba and his henchmen Savitar the Ninja and the evil Arsonist Beta Man.   Like G.I. Joe, Eagle Force used comic book adventures to market the line, beautfully illustrated, the Eagle Force line was created by Paul Kirchner a known Heavy Metal contributor. The then 29 year old Kirchner beautifully fleshed out the characters originally envisioned by Mego VP Bill Baron as being the "Screaming Eagles". (see the link below for the story in Kirchner's own words or by clicking here)

Each Eagle Force card had the look and feel of a comic book, showcasing each character as well as giving an adventure on the back.

The figures debut was at the 1982 Toyfair, Mego's catalog theme that year was "Soar with the Eagles", it was obvious they had high hopes for the line .  Many people inside Mego thought the line was a gamble, Mego had mounting debt and Eagle Force was expensive to produce.

According to then Mego chairman Martin Abrams, Eagle Force was poised to be a smash hit, the initial inventory had blown out at Target stores over the course of one weekend. Indicators of a hit in the toy world. Sadly, it was a case of too little, too late for the World's Greatest Toy company. Mego was done at retail and in 1982, closed it's doors forever. Eagle Force was too young a line to be picked up by another company (certain Mego items such as Magna Doodle and The Micronauts would find homes) So by 1982, the hopeful line had become an Orphan.

The 2" diecast figures were sort of a pioneer in terms of eighties toys, while unique at the time (They were apparantly inspired by the Britains figurines) companies such as Kenner and Tyco would continue to use the scale for lines such as M.A.S.K and Dino-Riders (which Paul Kirchner also worked on)  Because of it's abrupt timeline on the toy shelves  Eagle Force has been slow to find it's collector following. As time marches on, collectors have started to take notice of how well made and detailed a line it is.

This Gallery Page is only the start of our exploration into Eagle Force, click on the links for rare views of the line and a piece by it's creator!:

Creating Eagle Force: an indepth article about the line's inception by one of it's creators Mr Paul Kirchner

Eagle Force Production Sketches: See the original 1982 line up before the changes 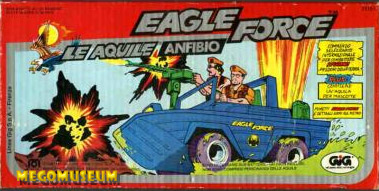 Like many of Mego's products, Eagle Force was truly an International affair and many of the world wide partners are familiar to Mego collectors.  Grand Toys handled the release in Canada, where the Eagle force came on bilingual cards made of a cheaper stock.  In Italy, Gig toys (famous for their Micronauts releases) put the individual figures in small boxes and released several exclusive vehicles.  As a For the UK the figures were called "Strike Force" when released by Ideal toys and in France, Phoenix toys released much of the line as "Aigle Force".

Even some Eagleforce knockoffs have been spotted on generic "military" cards. Below Paul Kirchner shares with us his collection of carded figures, enjoy for yourself what would be Mego's last Action figure line. One thing of note is the Eagle Force bubbles are Bomb Shaped, Mego had also done this with the Johnny Action Lion Rock Figures : 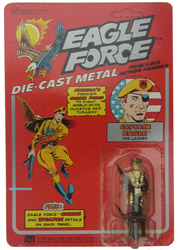 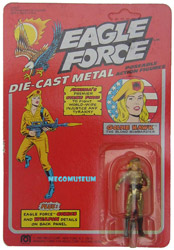 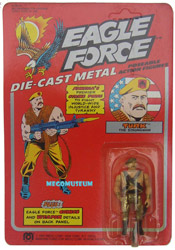 (from L to R) Captain Eagle, Goldie Hawk and Turk 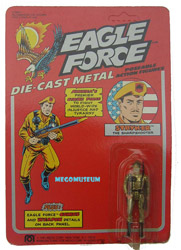 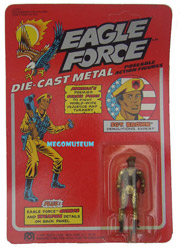 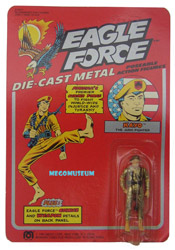 (from L to R) Stryker, Sgt. Brown and Kayo 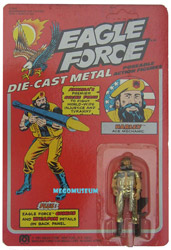 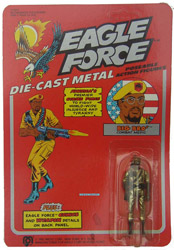 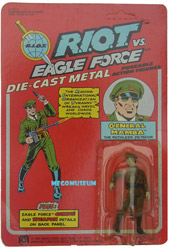 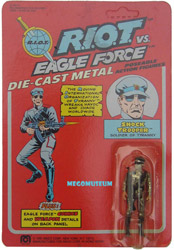 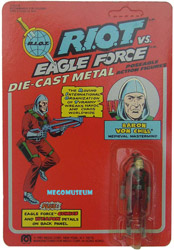 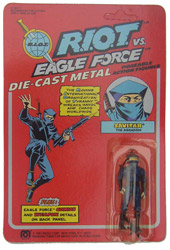 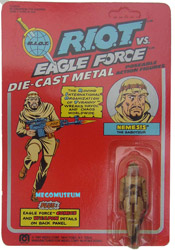 (from L to R) Savitar and Nemesis 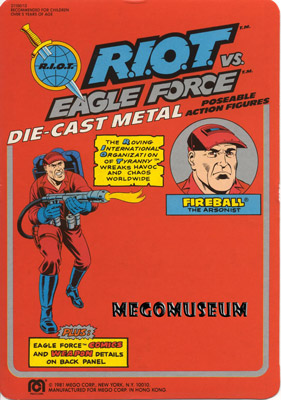 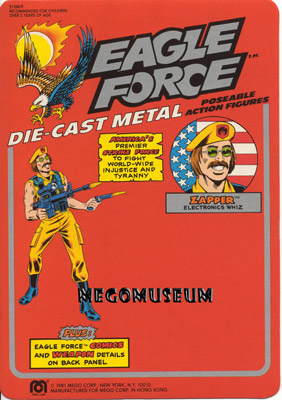 Some great examples of the cardartwork, note that the "Fireball" card is a prototype featuring his original name. 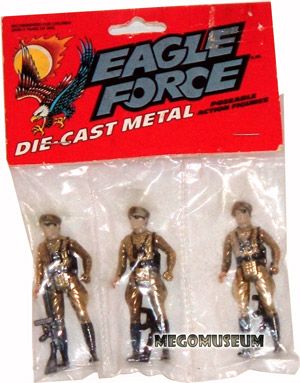 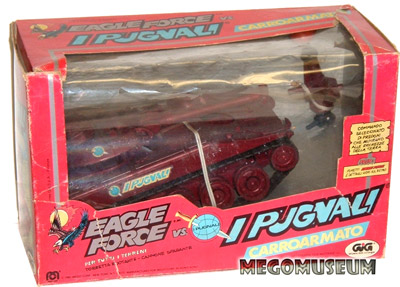 EF figures were later blown out in unmarked 3 packs, on the left is the R.I.O.T tank in it's GIG packaging. GIG included a cannon from the Micronauts with their releases, it is easier to find vehicles in GIG boxes normally than US packaging.

The "Eagle Force" Gallery would not have been possible without the fantastic contributions and assistance of Mr. Paul Kirchner and Mr Bill Baron.