What a wonderfully rustic piece, while many of the Mego items didn't seem to fit the primitave stylings of the apes (I mean really M-16's?) these playset pieces were logical additions to the "Ape World"

In the US, the Catapult and Wagon set was sold by itself and kids had to buy the action stallion if they wanted a horse. (FYI that's a custom human in that wagon, you aren't missing a figure folks)

Rare boxed version of the Canadian exclusive (Parkdale Novelty) Catapult, Horse and Wagon set. The box features the same artwork as the US version (sold sans the horse) but is much longer, features bilingual packaging (still the law in Canada) and a notification on how this set was made exclusively for Parkdale Novelty (and offered exclusively for Sears Canada). Cipsa sold the set as well in Mexico but the packaging is much different. 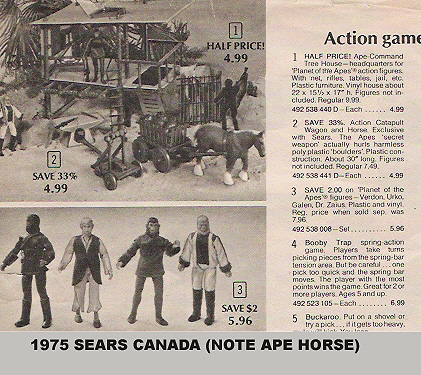 The Canadian Exclusive Horse, Wagon and Catapult set from the 1975 Sears Canada Catalog, for more on this check out the Mego Christmas Catalog Section of the Museum.