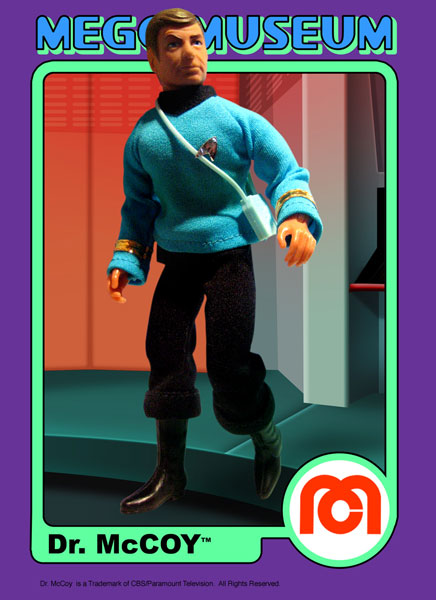 Dr. McCoy (Bones) (Item No. 51200/3), chief medical officer and third-in-command of the Starship Enterprise, as portrayed by the late DeForest Kelley. The head sculpt on this figure is a beautiful likeness of the actor, only slightly entering the realm of caricature.

It captures simultaneously the character’s pragmatism and humor. Oddly, though, the sculptors at Mego reserved the “one-raised-eyebrow” look for Bones, and not for Spock, where it would have been much more at home. The figure came outfitted in a blue tunic and black cuffed trousers. The tunic was detailed with a black neckband, two gold foil rank stripes on each arm, and a silver foil insignia. (This insignia is particularly problematic for loose collectors, as it consists of a stiff adhesive gray backing and a whisper-thin sheet of silver foil. This backing is almost always found on the tunic, as it is well-glued onto the fabric. However, the foil is delicate and typically curls, tears, and/or falls off after even five minutes of play time.) A blue tricorder, black utility belt, blue phaser and blue communicator served to complete the ensemble. (McCoy and Spock are extreme examples of Mego economy run amuck, in that they are, from the neck down, COMPLETELY IDENTICAL.) 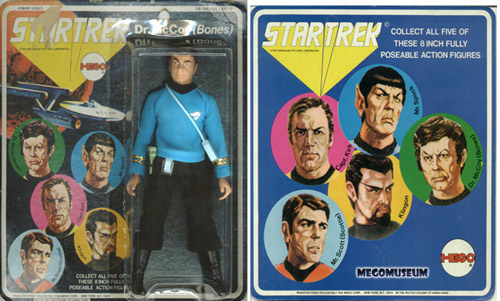 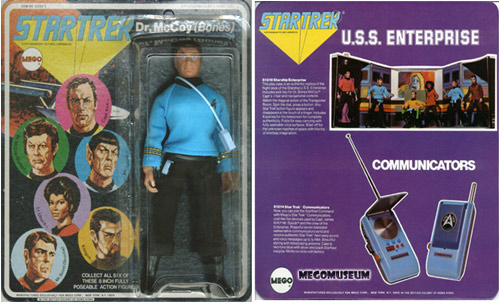 Dr.McCoy on a “6-face” card with the name in white lettering. 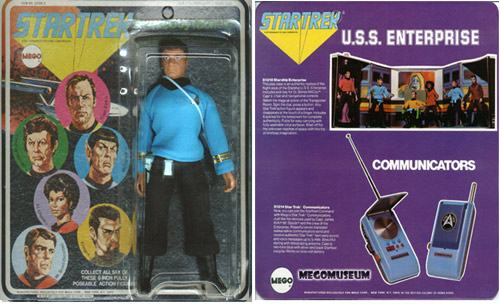 Here we have a Dr. McCoy on a “6-face” card with the name in green lettering.

Here we have the infamous “Blank-Back” Dr. McCoy Sears re-release (Item No. 91221/3). “Blank-Backs,” being later releases, were notorious for the inferior plastic used in their manufacture. Luckily, it seems that this specimen has been spared the all-too-common fate of a broken leg (or perhaps it simply hasn’t been shaken enough yet to reveal the flawÉ). Also note the “white-edged” foil insignia, presumably heat-sealed (an insignia method Mego began implementing in the late ‘Seventies). 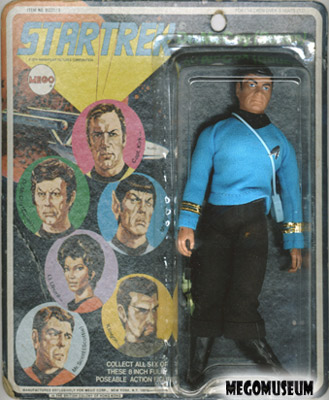 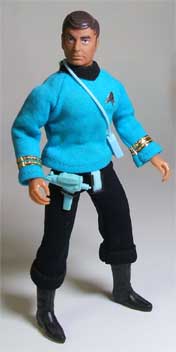 McCoy wears the same blue science division shirt as Spock and it has been factory reproduced by Doctor Mego and Emce Toys. The DM repro shirt fits a little more snug and is a little shorter. The collar is bigger, and the rank strips on the sleeves are a touch farther apart. The strips also have a slight texture, where the original has none. The shirt is marked DM on the inside near the collar. The Emce shirt is a little brighter blue than an original although the collar is much closer to the original in size than the DM counterpart. The rank stripes on the Emce shirt are a silver instead of the gold used on the original Mego shirts. The Emce is unmarked. It should be noted the originals tend to “fade” green between the arms and the waist, creating a greenish ring around the shirt. The real giveaway is the material. The repros are made from the more modern, slicker material.

McCoy’s head has been factory reproduced by Emce Toys. The reproduction has some minor differences. The hair and eyebrows are a little darker color. The hair on the repro is a little taller and the chin just a bit more narrow. The eyes are painted just slightly different on the repro (see picture), and it is made of a firmer material so the head is a little harder. It is marked with a 2007 CBS copyright on the back of the neck.