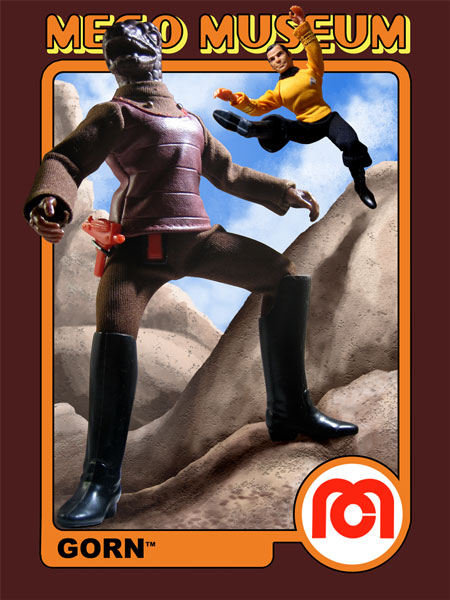 The Mego Gorn (Item No. 51203/3). This figure wins the booby prize for Most Embarrassing Attempt at a Star Trek Alien, hands-down (and with stiff competition like Talos and Mugato in the running, that’s saying something!). The Gorn appeared in the episode “Arena,” but he sure didn’t look like this. The figure and the character each possess reptilian features, but that’s where the resemblance ends. A real pioneer of Mego Reuse, in that it is the only figure in Mego’s entire eight-inch arsenal that is assembled completely from RECYCLED PARTS. The head sculpt is just a WGSH Lizard head cast in brown rather than green (ironically, the Gorn was Green on the show), the body is a Soldier Ape Body (possibly recycling the bodies left over when the Apes TV show was cancelled), and the outfit and accessories are that of the Mego Klingon figure! You’ve got to have real guts to try and pass off an outfit from the SAME LINE as “new.” The good news is that, since he’s wearing the same outfit as the Klingon, and Klingons are ridiculously easy and cheap to find, completing a loose Gorn figure is a snap. The bad news is that, by inheriting the Klingon’s duds, the Gorn also inherits some of the Klingons variation issues. These are discussed below:

The Gorn figure also went through tunic variations, just as the Klingon did. However, the Gorn has only been found with two of the three tunics associated with the Klingon. These variants appear to have no rhyme, reason or order, and seem to be based purely on whatever materials were available at the time of manufacture. 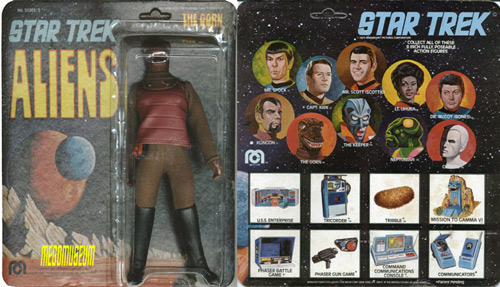 Above we have a Gorn on a “10-back” card. This specimen is wearing the first tunic (creamy-maroon/red). 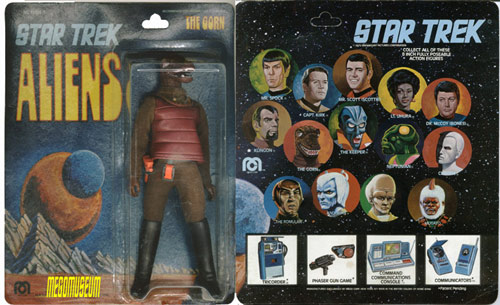 Above we have a Gorn on a “14-back” card (considerably rarer than the “10-back”). This specimen is wearing the first tunic (creamy-maroon/red).

The villian weapon set consists of the same phaser and a communicator the crew carries, but in red instead of blue. They are cast in the same color red, but there are various degrees of fading known. There are no factory made reproductions available.

Gorn has the same boots (as well as suit) as another Trek villian, Klingon. The boots are also to be found on the Black Beard figure from the Pirates line. The boots have been reproduced by Classic TV Toys. The reproductions are a tighter fit, and less glossy. They have a slight texture to them, where the originals are very smooth. They are marked CTV on the side.