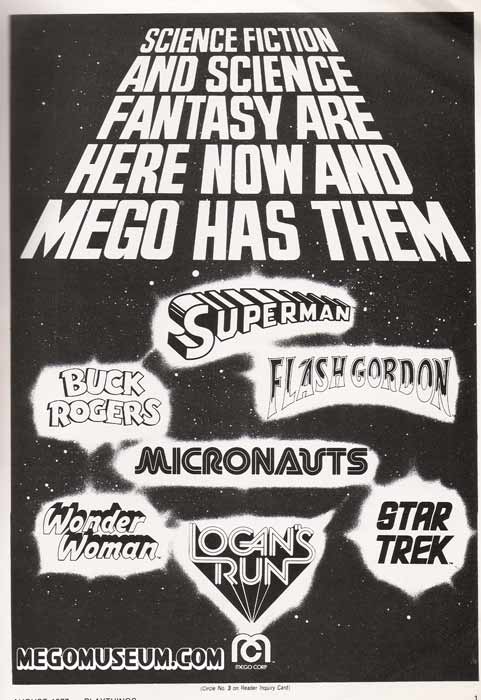 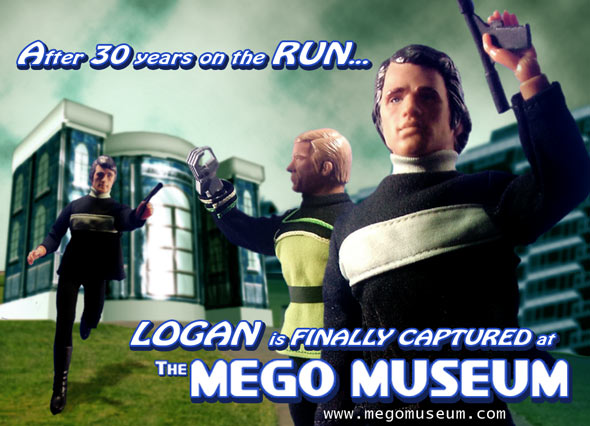 The TV version forgot about the movie’s ending and had Logan as a fugitive in a nuclear wasteland, aided by friends Jessica and android buddy REM, all the time being pursued by Logans ex-partner in killing, Francis 7.

Much like alot of seventies sci-fi, it was cancelled in 14 weeks after it was tossed around in it’s timeslot. Few would
have ever guessed that Mego optioned toys or that they were actually finished.

In the mid 1980’s, Long Island Toy Collector John McGonagle began telling other collectors of a news report he had seen in the 70’s about toys. McGonagle claimed that the report showed what happened when a toy company invested in a property that failed (like a cancelled TV series)
A horrifying segment was shown: Cases of Mego Logans Run dolls being shoved in an incinerator. Collectors believed the tale and because McGonagle himself first owned the Ralph Hinkly prototype, believed that somewhere a authentic LR prototype would surface.
Summer 2000 was the first such occurance when the first two figures surfaced out of a private collection. In 2007, the Megomuseum uncovered the third figure in the series, titular star Logan Five.

This page is dedicated to my late friend John McGonagle, one of the nicest guys around. He was right. 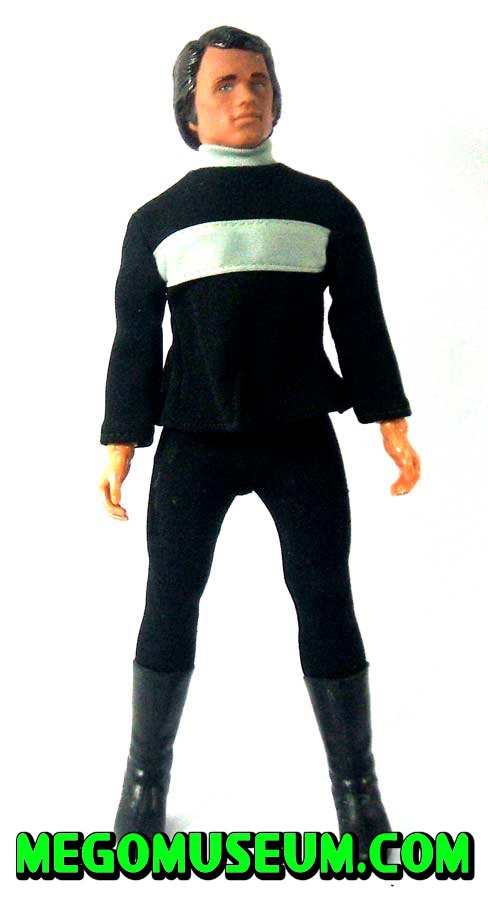 While REM and Francis have been spotted on very rare occasion this is the first time ever, that the figure of the star of the series has been seen. The Logan 5 prototype makes it debut on the Megomuseum. 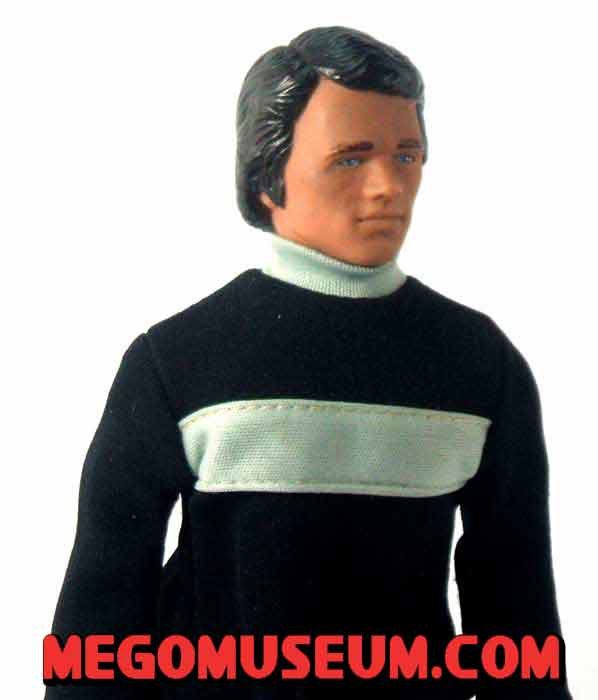 Like Rem and Francis 7, the head is a Ken Sheller sculpted likeness of the actor (in this case Gregory Harrison), the body is a ten inch one exactly like those from Flash Gordon. 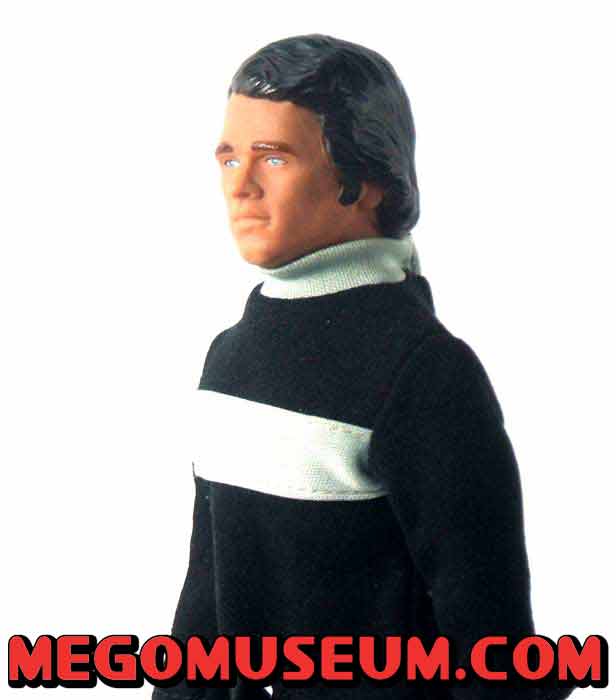 Currently, it is believed there are only two Logan figures remaining. The only figure from this series that remains to be found is that of Jessica 6, which would have a likeness of actor Heather Menzies. 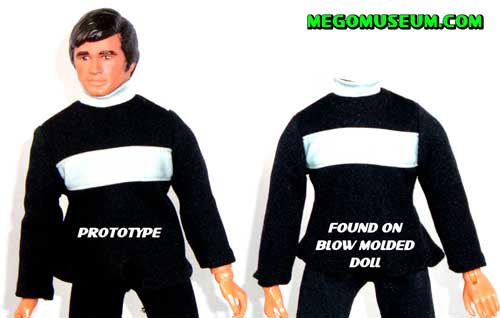 A side by side comparison of the Logans Run tunics, the original prototype and one purchases from a blow molded doll in the seventies. Other dolls have been spotted wearing Mego clothes, no packaged samples of these have surfaced.

Logan’s former Sandman Partnet was the major villain in the series,
cropping up for most of the episodes with his entourage.

Francis was the series villain played with gusto by Randolph Powell, rumour has it Francis would have joined the rebellion in the second season.

No Mego weapons have been found for the figures, a major sore point as it’s one of the best scifi weapons ever made. Courtesy of Brian (palitoy) 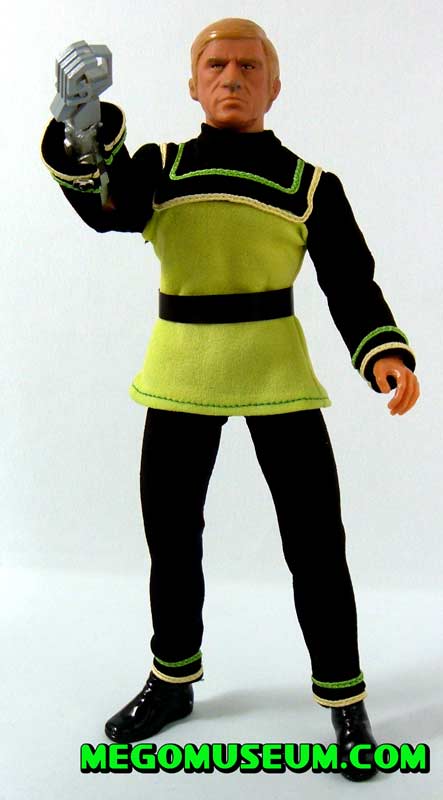 REM was a character unique to the Logan’s Run TV series. One part father figure, the other part Mr Spock, REM was a two hundred year old android that Logan and Jessica find in a lost mountain city.

Actor Donald Moffet gave REM alot of charm for a machine, as well as an easily bruised ego. 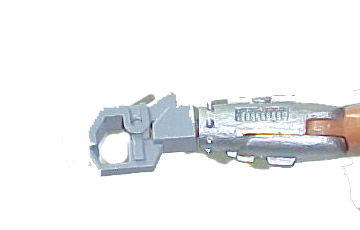 A weird thing Mego did was to give REM a claw (very similiar to the Micronauts Biotron claw), while the character was often shown in pieces on the show, he never had this hand. Perhaps it was an attempt to make him more toy like. Rem’s claw is detachable but then so are the feet on this prototype so it’s not know if this would be permanent. 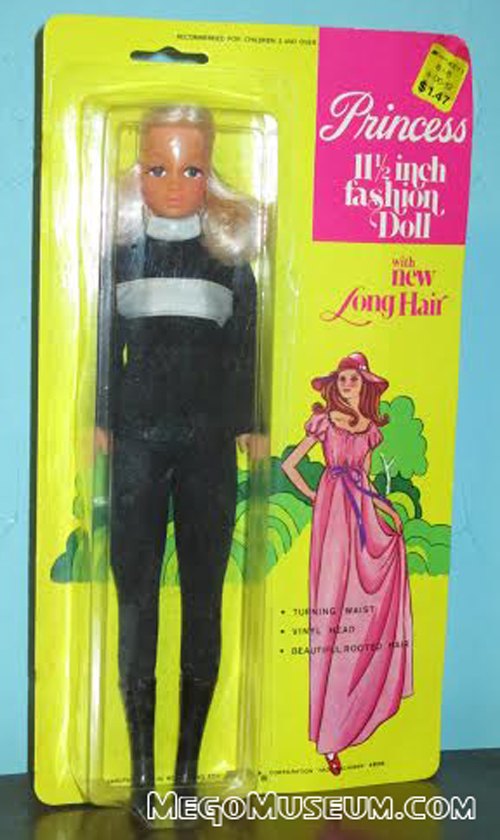 For years, Mego collectors have been finding oddities such as “Mandy the Pretty Doll” dressed like Mr Fantastic or the Bonnie Dee Doll dressed in full Planet of the Ape regalia . These strange blow molded dolls have been largely explained away as a 3rd party factory trying to get rid of it’s extras after Mego was done with the line. It’s likely that Mego wasn’t even aware of the practice.

Now we have two more additions to the lore in the form of these 11.5 figures that were sold exclusively at K-Mart stores in the late1970s, the first being a Fashion Doll clad as a Sandman from Logan’s Run. Mego famously abandoned the Logan’s Runline while in production and samples of these tunics have surfaced before and are identical to ones found on the Mego production samples.

For years collectors have told us about buying Logan’s Run Fashion dolls at K-Mart, thanks to collector David Spurgeon, we have our first look at a carded example!