These figures were released by Mego in 1974 under the Bavarelli name. Another example of the Mego/Lion Rock sales agent in Europe creating product specifically for the European distributors and their market. Tex Willers were based on a widely popular Italian comic book and are distinguished by their bright graphic colors taken for the comics. For me personally, these are very desirable Megos and their great design and color blow away the  Mego American West Cowboys. Who would look better with your Heros? Yellow and orange cowboys or BEIGE cowboys?

The line makes full use of pre-existing Mego parts.  Bruce Wayne as Tex,  Cochise as Tiger Jack, The POTA Astronaut as Kit Willer (Tex’s son) , and Buffalo Bill as Kit Carson. Action Jackson Cowboy hats for the guys, and the usual assortment of six shooters, rifles, boots and moccassins.

New! Click on the Character for their individual Page listing contents, packaging and original box art! 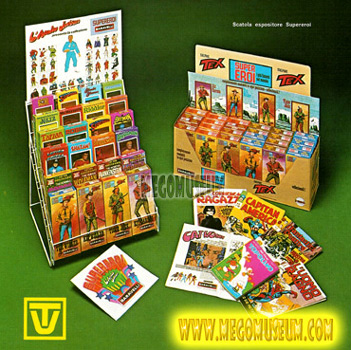 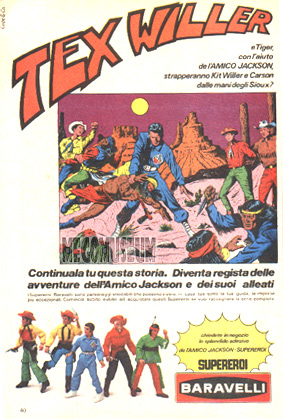 Excellent Italian Ad courtesy of Albert, this series of Baravelli ads always had Action Jackson involved with the other Mego licensed
characters, you can view them all at  The Mego Action Jackson Ad Gallery

The original Willer line was only available on the Mego type1 metal rivet body. Since the reproductions were made on CTVT’s version of the type2 body, guides to both body types are included on this page.

Original Willers are only available on this body. The first version of the mego male body was a metal rivet, less muscled body strung together with elastic. It has not been factory reproduced.

Original Willers are NOT available on this body, only the reproductions. This second version of the male body was more buff and had plastic joints instead of metal rivets, and strung together with hooks and rubber. Both Doctor Mego and Classic TV Toys offer factory made repro Mego bodies. DM’s (marked 7th Street Toys on the back) is very accurate in detail and appearance but with a heavier feel and more rubbery hands. CTVT’s bodies (marked Figures, Inc. on the back) tend to run a touch shorter, are more fragile, and have a slightly different design. A telltale sign of the CTVT body are the legs that tend to snap together at the knees.