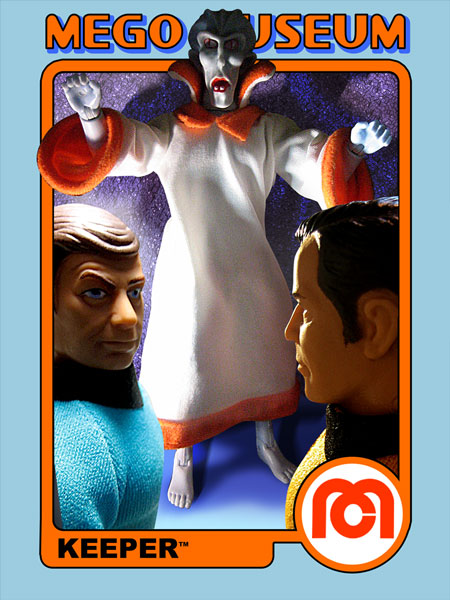 The Keeper (Item No. 51203/2), is a hybrid of two “Star Trek” aliens. This figure shares its name with the Talosian designated as The Keeper (from the episode “The Cage” or “The Menagerie”–take your pick), but possesses a head and robe that bears a striking resemblance to Balok’s viewscreen “puppet” from “The Corbomite Manuever.” Mego would revisit the Talosian theme in their third series of figures. 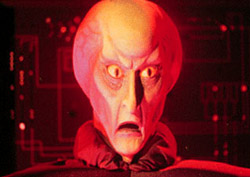 The Keeper was a logical choice as his visage appeared in the end credits for Star Trek, he was easily recognized even by those who hadn’t seen the episode.

The head sculpt is adequately otherworldly, and, as mentioned previously, is an interesting echo of Balok’s puppet. The body of this figure is a standard Type 2 male, but is cast entirely in powder-blue (a body shared with another “Trek” Alien: the Andorian). The figure came outfitted in a white robe with a large collar; the sleeves, collar and hem were all trimmed in orange.

Due to the total lack of accessories, and the presence of only one article of clothing, this Alien is, hands-down, the easiest to find loose and complete. However, since his robe is white, it almost ALWAYS has a stain or soiling of some kind. 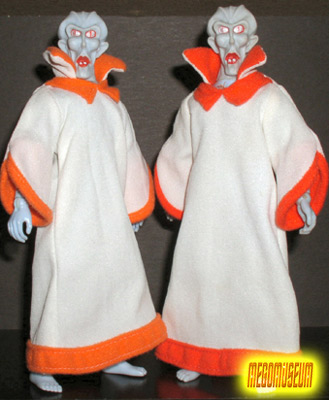 The Keeper’s robe came in two different shades of orange: light-orange (left) and dark-orange (right). The difference is subtle, but they are definitely two different colors. However, it is difficult to tell which shade a particular Keeper has without the other shade with which to compare it. 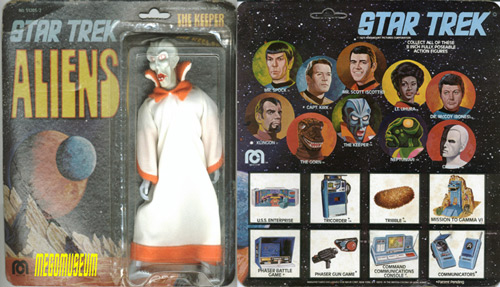 Above we have a Keeper on a “10-back” card. This specimen is wearing the lighter Orange robe. 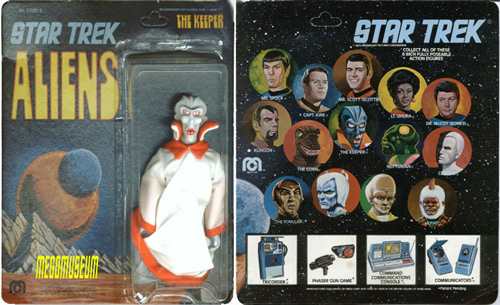 Above we have a Keeper on a “14-back” card (considerably rarer than the “10-back”). This specimen is wearing the dark-orange style of robe. Note the broken legs; Keeper figures (and Andorians) are notorious for having broken knee joints, even inside sealed packages. 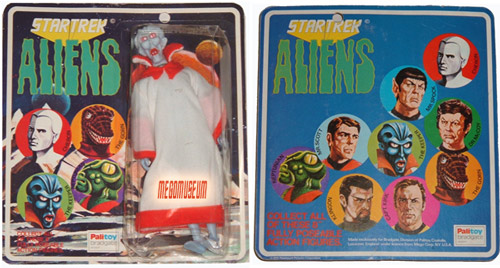 Above we have a Keeper on a UK-exclusive Palitoy package. Noticeably different from its American counterpart, these cards are extremely rare, bold, beautiful, and highly desired–an extremely expensive mixture, to be sure. All four of the second series figures (Neptunian, Keeper, Gorn, Cheron) were available on this card in the UK. 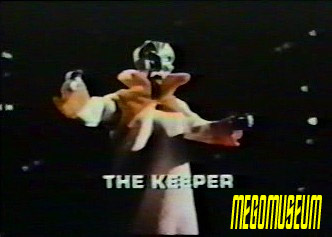 Here Mike Farrence provides us with a shot of the prototype Keeper from the Mego sales reels. Note the wide butterfly collars on the mocked up uniforms. Look Familiar? The Larami company produced dolls based on the TV Mini Series the MArtian Chronicles and based the clothing on the Keepers Robe. For more info on these and other companies check out our Mego Esque Gallery 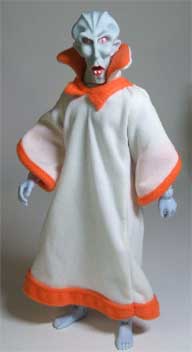 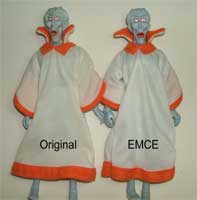 Keeper’s head has been factory reproduced by Emce Toys. The reproduction head is a touch more narrow and the red paint used around the mouth and eyes is a little brighter. The red slits for the eyes are painted a little more narrow on the repro as well. It is marked with a 2008 CBS copyright on the back of the neck.