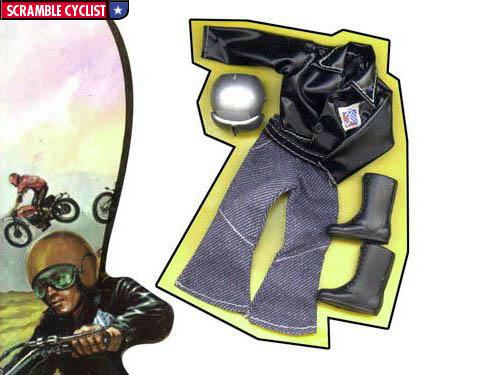 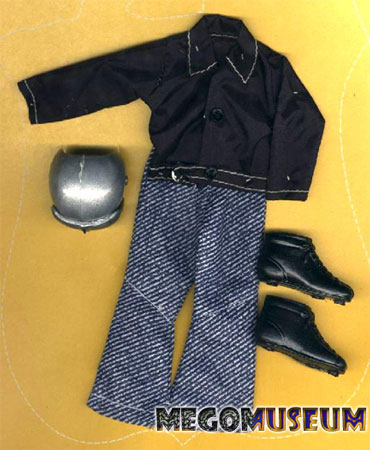 This variation is an AJ Scramble cycle outfit with cut
down hockey skates for Shoes and a jacket made out of the same
material as a Mego Penguin. Everything is marked Mego, early
or late variant? You decide (Thanks Ron!)

This set comes with a gray helmet with a blue transparent visor that slides up and down. It has a white elastic string to hold it on the head around the neck. This is the same helmet found on the POTA Astronaut, and has not been factory reproduced.

This item has not been factory reproduced.

The Scramble Cyclist set comes with a pair of jeans that can also be found on Dinah’s friend Don. This item has not been factory reproduced.

Many AJ sets come with combat boots. The same combat boots found on the POTA Soldier Ape. The boots have been reproduced by Classic TV Toys and by EMCE Toys. The original is made of a firm plastic, while the CTVT reproduction is a very soft rubbery material. The CTVT repro is unmarked. EMCE Toys reproduced these boots for their reproduction Soldier Ape figure. The EMCE version is very accurate in appearance, size and detail. The big “tell” with these boots are the thickness They are much thicker than an original boot. It’s the same thickness difference noted with Doc Mego’s Hero boots when compared to those originals.