The outstanding success of the “Star Trek” line naturally led to new releases over the next two years.  Mego’s first priority was to give the Enterprise crew more adversaries to fight.  In 1975, four new figures were released: a Neptunian, the Keeper, a Gorn, and a Cheron.  These characters were released under the new general heading of “Aliens.” 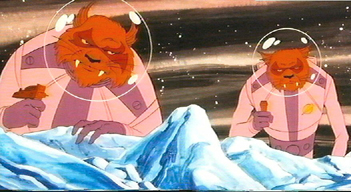 Ever wonder why Mego felt it permissable to give the Klingon, Gorn, and Romulan red Starfleet Phasers? Case closed..?

It is probably more accurate to describe these Aliens as “inspired by” rather than “from” the “Star Trek” series.  Mego was a pioneer in the field of licensing popular intellectual property for toy manufacture, and the problem with being a trailblazer is that there is no one ahead of you to set the standard.  Mego was making it up as they went, and Paramount, being just as inexperienced in licensing (and still not fully grasping the cultural phenomenon that “Star Trek” was becoming), wasn’t very concerned with cracking the whip of consistency.  As a result of this relaxed attitude to canonical adherence, the majority of the figures in the Aliens series can best be described as having merely a passing resemblance to their namesakes.

These first Aliens are several orders of magnitude rarer than any of the crew or the Klingon, but common enough to carry fairly reasonable price tags, allowing even the most casual Mego collector to obtain them.  These figures stayed in production throughout the final series, which helps to explain the relative ease in acquiring them.

The figures released from this point on were all Type 2 bodies.  Due to the exotic nature of alien characters, most of the bodies used for the figures were of strange and unique colors, were of abnormal size, or had unique, character-specific body components created for them.  These were all nice touches, to be sure, but they do not make the task of repairing figures any easier for the loose Mego collector.

Mego also created new card art for the Aliens series, a striking planetary vista with steep mountains rising to the left, and a red planet and blue moon hung against a black, starry night.  The back of the package featured new profile paintings of the ten figures available at that point, as well as ads for the Enterprise Playset, Tricorder, Tribble (whose existence is still debated to this day), Mission to Gamma VI Playset, Phaser Battle Game, Phaser Gun Game, Command Communications Console, and Communicators.  The card art for the UK Palitoy releases was even more impressive and bold, with profiles of the Aliens on the front, and a card back design very reminiscent of the original “5-face” card back.