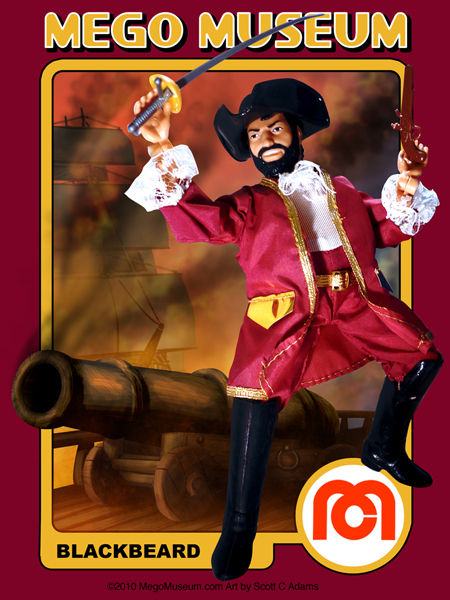 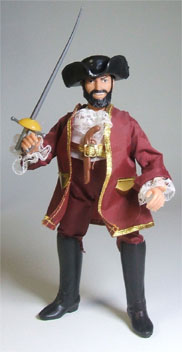 Famed Pirate Edward Teach AKA Black Beard understood the power of image and reputation. So fearsome was he that he would become a legend still known worldwide some 300 years after his demise.

It makes perfect sense that Mego would add this legendary figure to their Pirate line.

Mego chose to use the so called “Fat Body” for Black Beard, creating a more imposting figure. He came equipped with a sword, a hat and two pistols. Black Beards head would later surface on a figure known as “Judah Maccabee” which was sold exclusively in religious orientated stores. 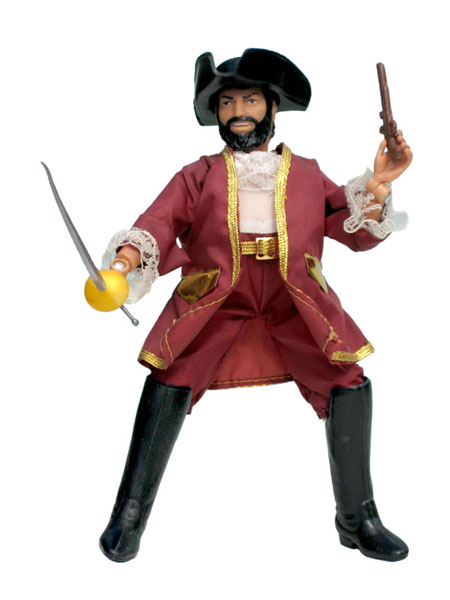 The box backs feature photographs of early production samples
of the figures with shiny metallic finish on the armor.

The Super Pirates were oalso released abroad by Toltoys (Australia) and Marx (Europe and UK), they are thought to have been better received in those areas. 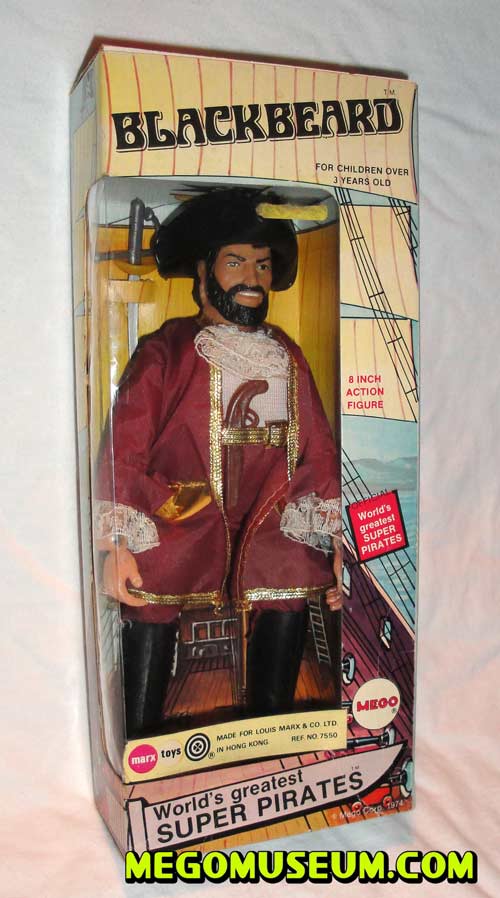 Above is a Marx version of Black Beard, no packaging variations exist, the box is merely stickered. 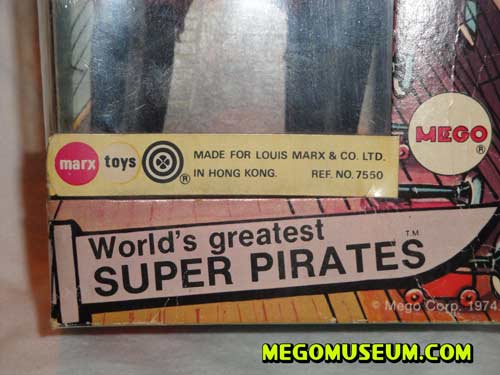 A close up of the Marx sticker. 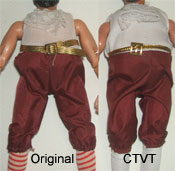 Black Beard’s shirt and pants are a one piece jumper design. It has been reproduced by Classic TV Toys and done pretty accurately. The biggest giveaway is the shirt material. On the original the shirt material has a degree of transparency while the repro has a much thicker and whiter material for the shirt. The repro is unmarked. 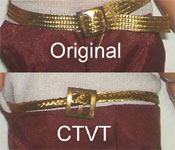 Black Beard wears a gold belt around his waist that has been reproduced by CTVT. The reproduction belt is much more narrow than an original, and the belt buckle has wider metal posts around the belt holes.

BB’s coat has been reproduced by CTVT. The big giveaway here is the pockets. On the repro, the gold pocket flaps are smaller and positioned much lower on the coat than an original. The lace sleeves on the repro are also a touch longer. The CTVT coat is unmarked. 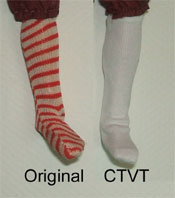 The Pirate line is one of the few that featured socks. Often overlooked on Blackbeard since the tall boots completely hide them, Black Beard does indeed where red and white striped socks. The sock has been reproduced by CTVT but oddly enough not put on CTVT’s reproduction Black Beard figure. The CTVT BB sports a solid white sock. The red and white striped repro can be found on CTVT’s Long John Silver figure. The repro sock is a little thicker, longer and the red stripes are not quite as wide. They are unmarked.

Blackbeard has the same boots as a couple Trek villians, the Klingon and the Gorn. The boots have been reproduced by Classic TV Toys and by Emce Toys. The CTVT reproductions are a tighter fit, and less glossy. They have a slight texture to them, where the originals are very smooth. They are marked CTV on the side. The Emce Toys version has a very glossy, patent leather look. These are a little more narrow from the side, and rounded than the orginals around the knee area. The Emce version is unmarked. 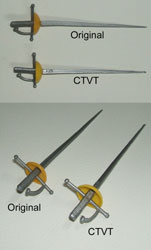 Blackbeard uses the same sword as the Zorro figure. It has been reproduced by CTVT. The reproduction is very accurate. It is a little less flexible and usually has a little flashing on the edges. It is marked CTV on the blade.

Blackbeard and Long John Silver wear the same hat. The hat has been reproduced by CTVT. The repro is a little more glossy, a little rougher around the top edges and a little firmer plastic. It is marked CTV on the inside.

BB’s head has been reproduced by CTVT. The CTVT head is a little wider and the features are not as defined. They eyebrows are painted wider on the repro and the eyeballs are bigger. The repro is unmarked. Also to be noted is KTAV Publishing House created a Judah Maccabee figure using the Blackbeard sculpt. The KTAV head has a slightly different paintjob and has the lips painted, that’s the big telltale.