1976 saw the debut of the Comic Action Heroes, Mego was looking for a way to captilize on the success of the Worlds Greatest Superhero license. Mego decided that series of playsets  and vehicles and “pocket sized” action figures ,would augment the license without as Neal Kublan put it “pirating sales from the core (8″ Superhero) business”. According to Mr Kublan, the line sold “Good, not great” but it should be made known that from it’s 1976 debut, Mego produced a 3 3/4″ Superhero line until it’s demise in 1982.

The figures may seem crude by today’s standards but they were a pioneer for the licensed 3 3/4″ action figure explosion that happend in the late 70’s. Each figure was sat in a crouched position to enable the figure to fit into vehicles and stand on their own.

The little blue catalog that appears in carded UK Comic Action Heroes figure has been a mystery to us at the Megomuseum for year. Not one that kept us up at night but a mystery none the less. Thanks to Museum member Clemso, we can finally see the crazy wonderful artwork up close.

The figures may seem crude by today’s standards but they were a pioneer for the licensed 3 3/4″ action figure explosion that happend in the late 70’s. Each figure was sat in a crouched position to enable the figure to fit into vehicles and stand on their own.

The average retail on the CAH was $9.99 for the large sets, while the individual figures averaged $0.99 a piece. 12 Figures in total for the Line: Batman, Robin, Superman, Aquaman, Wonder Woman, Shazam, Spiderman, Hulk, Captain America, Joker, Penguin,
and Green Goblin. 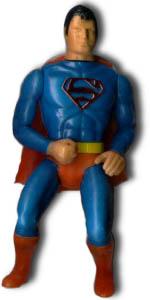 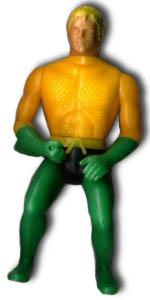 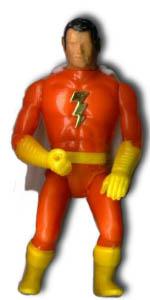 While crude in appearance, the Comic Action Heroes do show a great deal of innovation on Mego’s part. Each part was cast in one solid colour and then connected, gloves and arms on a character such as Aquaman are two pieces to save on using paint ops. The body style was reused for Mego’s 1977 CB McHaul line. 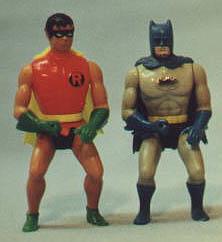 The Comic Action Heroes launched in 1976 and Mego added some new products to the line in ’77 (only the Batcopter was produced). By 1978, Comic Action Heroes were reduced to two offerings, Spidercar and Batmobile Giftsets with figures. The line was distributed in Canada by
Grand Toys, MC toys handled the line in  Germanyand  Denys Fisher took care of the UK, each company made creative changes to the line’s
packaging. For more information on this consult the  Carded Comic Action Gallery By 1978, the line was retooled into the Pocket Superheroes
but they have their own gallery….. 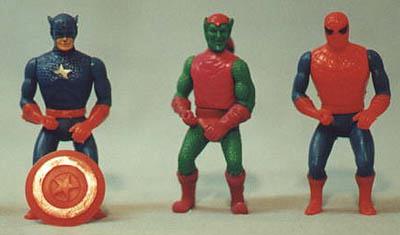 Early Comic Action Wonder woman figures (the one on the right) had a very crude almost Man-like head sculpt! These figures only appeared on the blank cards and were quickly replaced by the more feminine headsculpt on the left (photo also courtesy of Roberto)

8″ Mego never got the luxury of such nice accessories, Joker’s Cane, Wonder Woman’s Lasso, Batman (and Robins) Batrope and of course,
the Penguin’s umbrella.