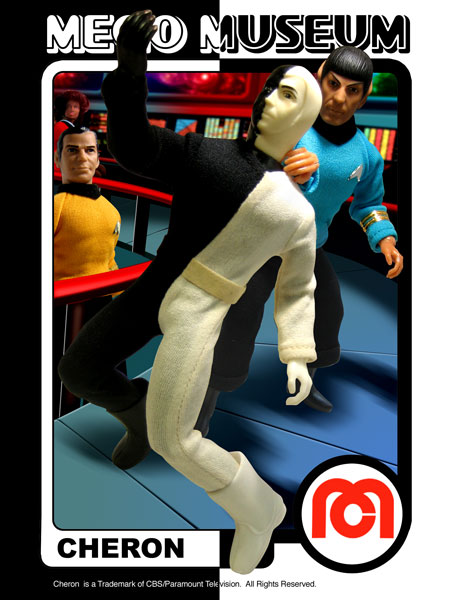 The Mego Cheron (Item No. 51203/4), arguably the best attempt at a “Star Trek” Alien within the first series of Aliens. This estimation is not due to any impressive degree of craftsmanship in the Cheron, but is instead indicative of the low quality inherent to the other three Aliens. Compared to lackluster entries like the Neptunian, Keeper and Gorn, this figure was practically a Gold Standard.

The design is based on the character of Bele (portrayed by Frank Gorshin of “Batman” fame) from the Classic “Trek” episode “Let That Be Your Last Battlefield.” This was, admittedly, as a choice for an Alien figure, about as good as any of the other second-string candidates in the “Trek” canon. Mego over-simplified the figure’s design, taking the “half-black, half-white” concept to a child’s extreme, applying it not only to the skin, but to the jumpsuit and boots as well. Mego passed on creating Lokai ( Lou Antonio), Bele’s intercultural adversary from the same episode. It would have been a simple figure to create however perhaps one Cheron was enough.

The Cheron figure has a certain simplistic charm about it. It’s certainly a bold color scheme (or lack-of-color scheme), and it really jumps off the shelf at you when seen in person. The head is rather non-descript and generic, molded in white with black paint on the right side. There is no hair present on this sculpt, Mego instead opting for a more conservative and simple “molded-hood” look. The body is cast entirely in black plastic, with the exception of one white left hand. The figure is clothed in a bodysuit (with sewn-on belt) that is split right down the middle: black on the right, white on the left. A pair of short boots–one black, one white–complete the outfit.

The Cheron figure often suffers from a bacterial malady that manifests itself in a blackish-brownish stain within the white half of the outfit. (This is not a rare varient as some dealers have tried to pass it off as) The black plastic used for the Cheron body has within it microbes (presumably indigenous to the black dye) that react adversely to the white material from which half of the bodysuit is made. Once the spread of the bacterial stain starts, no amount of bleach can turn back the clock. Many loose collectors have taken to swapping out the black body of their Cheron and replacing it with a standard flesh body. Carded Mego Cherons, however, are at the mercy of their environment and time.

Cherons are relatively plentiful, and are almost as common as the Keeper. However, when you factor in the possibility of boot theft, the ease with which black paint rubs off of white plastic, the risk of bacterial reaction, and the natural tendency for white fabric to become stained or soiled, you begin to understand the premium price that a mint Cheron specimen can sometimes command. 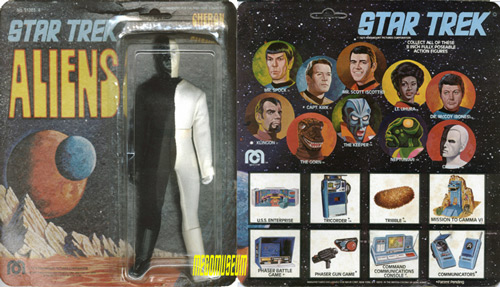 Above is a Mego Cheron on a 1st Series Alien Card “10 Back” card. The easiest way to find a Cheron on the card. 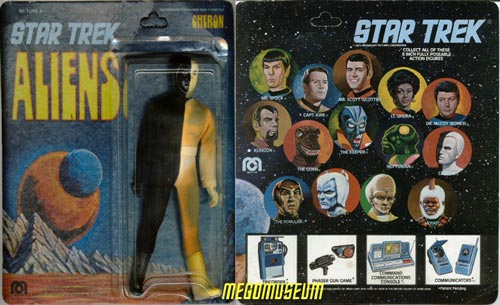 The  Cheron figure was also available on a 2nd Series Alien “14-back” card. This card is considerably rarer than the “10-back”, you’ll  note that this figure also has the dreaded “Cheron Rot”.  Note: This is not a variant folks. 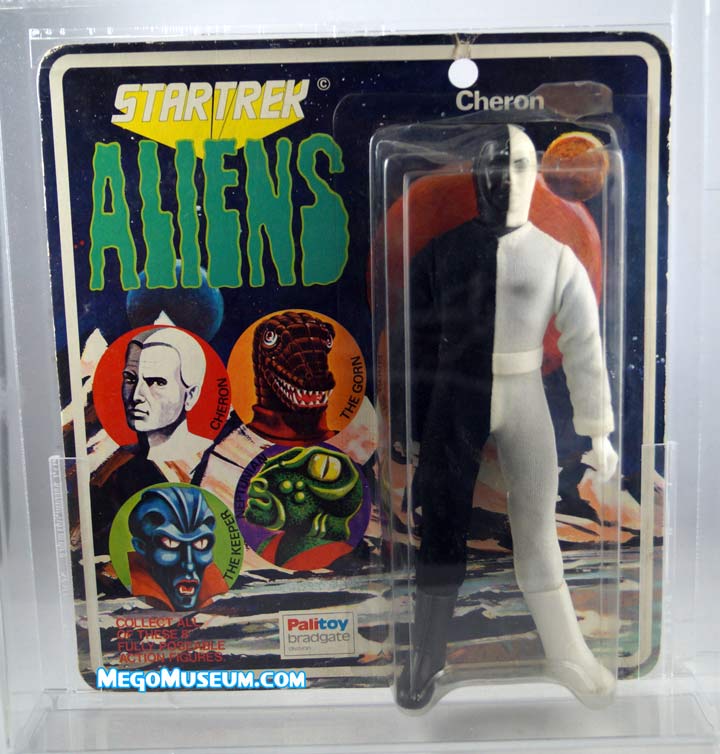 Above we have a Cheron on a UK-exclusive Palitoy package. Noticeably different from its American counterpart, these cards are extremely rare, bold, beautiful, and highly desired–an extremely expensive mixture, to be sure. All four of the second series figures (Neptunian, Keeper, Gorn, Cheron) were available on this card in the UK. 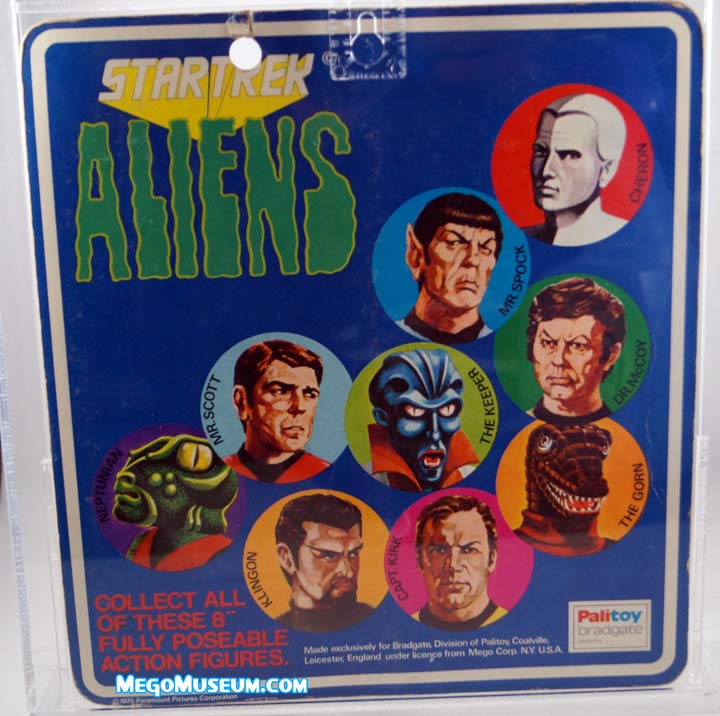 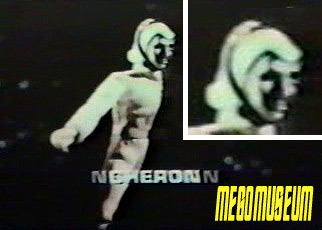 Here Mike Farrence provides us with a shot of the prototype Cheron head from the Mego commercials, obviously a repainted 8″ head, one question, who is he?

Look Familiar? Mego reused the Alan Virdon headsculpt to produce the Cheron . Alan is an astronaut from the Mego Planet of the Apes line (thanx to Len Starr for the info) 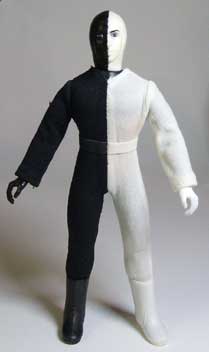 Cheron has one black boot, and one white boot. The white boot is shared with Alan Carter from the Space 1999 line. It has been factory reproduced by Classic TV Toys on their version Alan Carter. Like the Mr. Fantastic boot, it is a factory cut version of the WGSH Hero boot. The reproduction is cut a little taller than the original, and is a little more glossy. It is unmarked. Also reproducted by CTVT is a tall white hero boot that can be cut down to size to make a proper height white cheron boot. See the photoshop example of the black boot below. 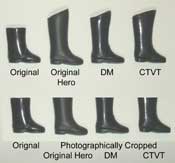 Cheron’s black boot is basically a factory cut down black hero style boot and is the same boot worn by WGSH’s Mr. Fantastic. While this version of the boot has not been factory reproduced, uncut black hero boots have been made by both Doc Mego and CTVT. These reproductions can be hand cut down by the user to create an almost factory reproduction of the Cheron black boot. Doc’s reproductions are a little more glossy and a little thicker plastic. DM’s are a little thinner up from the ankle which is more noticable when cut for Cheron than when used as a hero boot. CTVT are closer in shape, but also a little more glossy. The Doc Mego boots are marked DM on the bottom, and the CTVT boots are unmarked. The picture includes a photoshop crop of what the reproduction boots look like cut flat. Also included in the picture are original black hero style boots which are often cut to create an “original” Cheron black boot. The black hero style boots are found in the Action Jackson Fishing set and also on some Planet of the Apes Dr. Zauis figures. The AJ/Zauis boots tend to be less glossy than the Cheron originals.