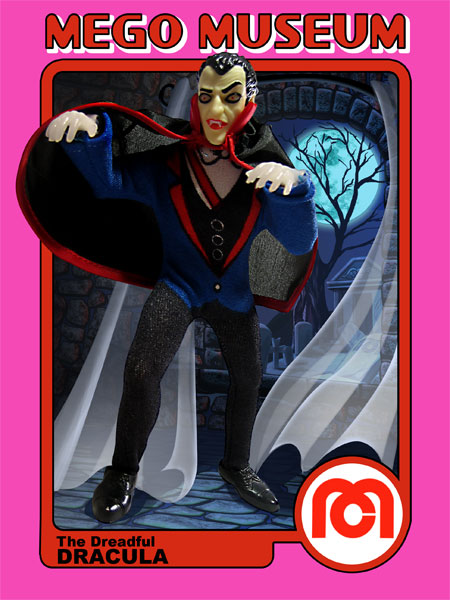 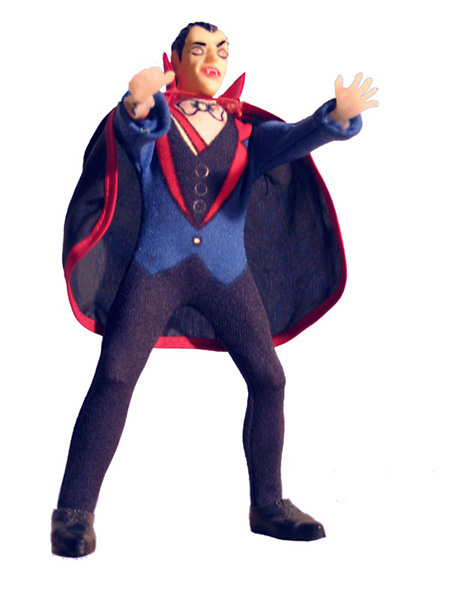 Being the only character in the mad monsters line who is supposed to resemble a human, Mad Monsters Dracula comes off as more cartoony than the rest of the characters in the line. This isn’t helped by his screen printed outfit (similiar to the Joker) but there is a certain child like charm to the character. Of all the monsters, Dracula is the most difficult to obtain in most forms, it’s likely his case pack was lower than Frankenstein or the Mummy who were seen much more frequently. 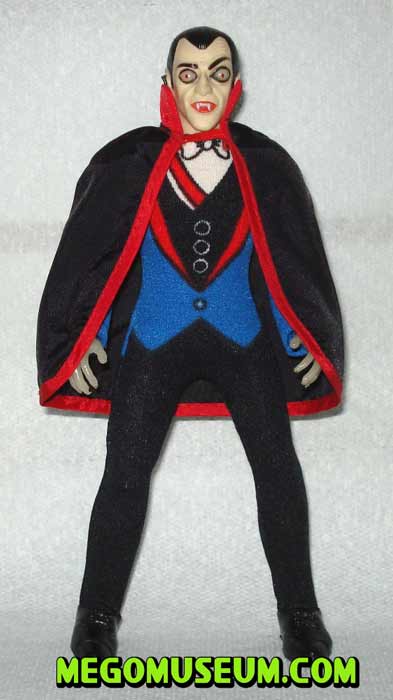 Smooth Haired Dracula is believed to be the first version of the Mad Monster figure, even though they were trying to be generic as possible the theory was that by using smooth hair Mego feared they were infringing upon Universal copyright. When this was discovered the figure was first replainted (see below) and then resculpted to add texture to the Count’s locks. 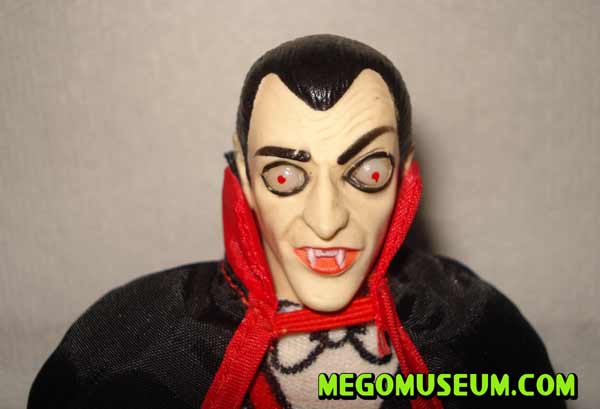 A close up of smooth haired Dracula, who is quite difficult to find (Picture courtesy of Charlie Balicki. 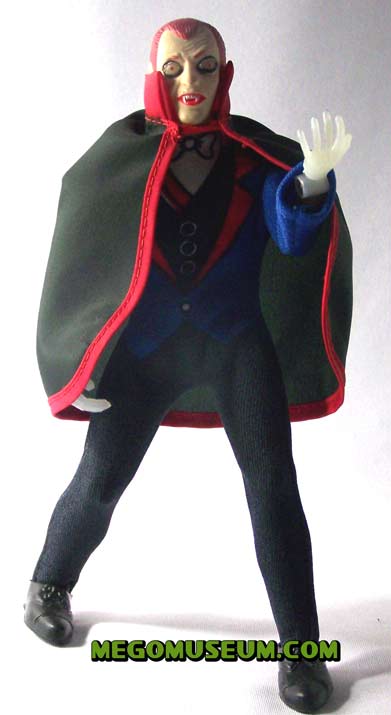 Red Haired Dracula is believed to be a quick fix on the part of Mego to correct any similiarities to the Universal Dracula make up, a similiar fix was done for Mad Monsters Frankenstein as well. There are not many known examples of red haired Dracula in the world (Watch out for the recent reproduction figures) so the run time must have been limited on these figures. (Pic courtesy of Palitoy)

Sculpted haired Dracula retained the widest release of all Mad Monsters figures and remains the most commonly found on a type one body. 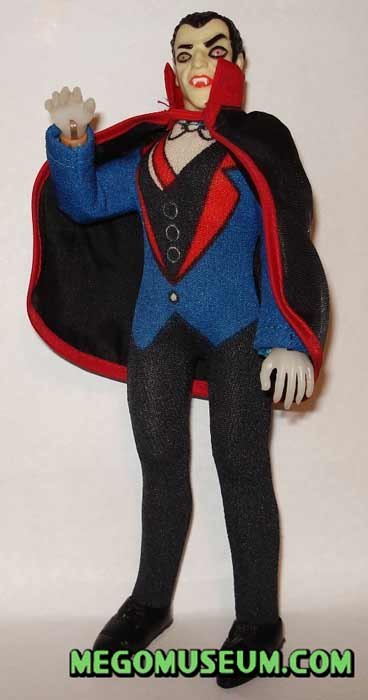 Dracula was released on a type two body as well but these can be prove difficult to find. Picture courtesy of Charlie Balicki. 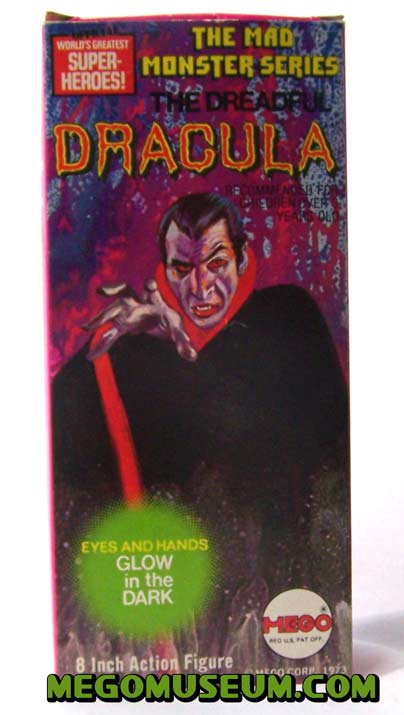 Dracula is most commonly found packaged in his original solid box although out of the four monster figures he is the most elusive. 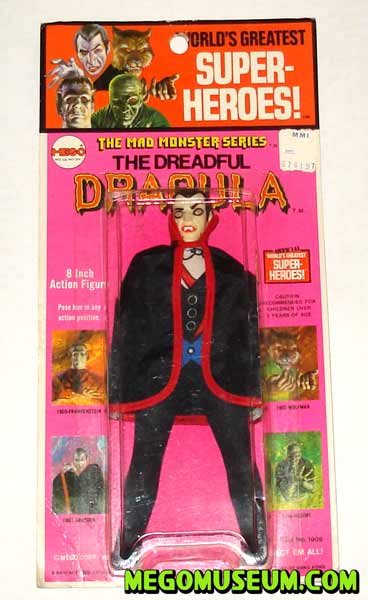 All of the Mad Monsters were released on Kresge Cards and remain difficult to find. Kresge Dracula from the collection of Charlie Balicki. 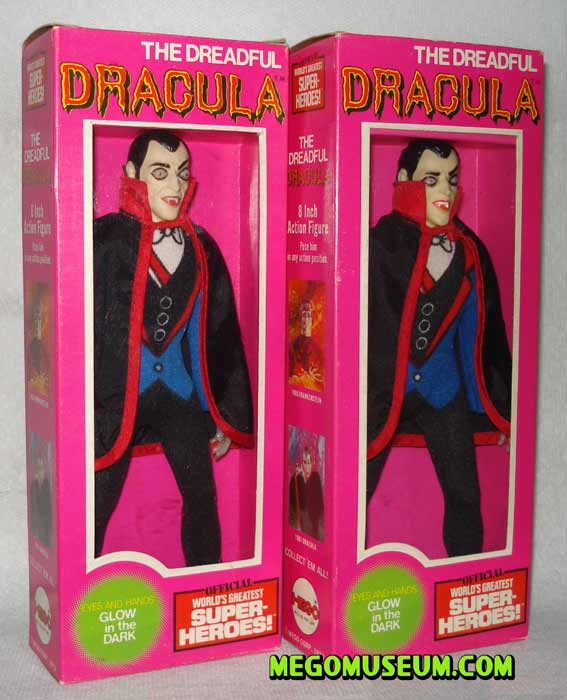 Mego briefly released the Mad Monsters in window boxes, one of the tougher sets to complete. Here, super collector Charlie Balaicki has placed a MIB smooth haired Dracula next to a regular sculpted hair, it makes you drool. 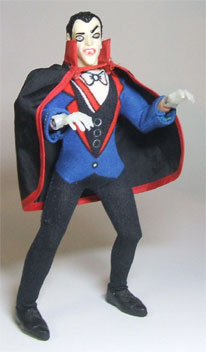 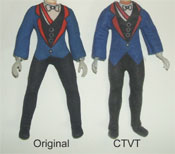 Drac’s original cape is tailored to fit around his shoulders and over the front of his arms. It also has a tall red collar and an elastic piece that holds the cape around the neck. The Lion Rock release of the figure features a slightly different cape. Instead of the elastic, it has a snap on the front which closes around the neck to hold the cape on. The Mego version of the cape has been reproduced by CTVT, but it is not so tailored, it’s more of a rounded shape, nor does it have the tall collar. The repro is unmarked.

Original Drac, like the other original monsters, has glow in the dark eyes, which sometimes suffer from what is called “eye melt”. The material used in the making of the glow in the dark eyes can sometimes turn to goo. Drac’s head has been reproducted by CTVT but without the plastic made glow eyes, the repro head has painted glow eyes. The CTVT head is a little wider and the features are not as defined. The repro is unmarked.