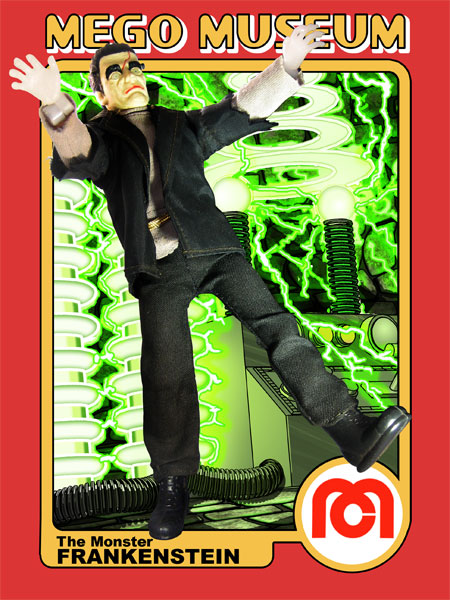 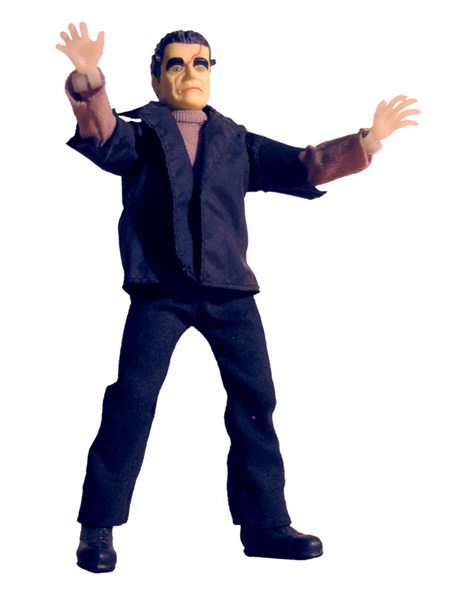 Frankenstein was the heaviest case pack in the mad monsters assortment, possibly one of the easily recognized of the series, mego seemed to spend a little extra on the character giving him a great outfit. While the bolts may be trademark of Universal studios, Mego put them on head instead of his neck.

Flat Top Frankenstein is believed to be the earliest version of the figure, it was once theorised by a collector that the look was too close to the copyrighted makeup from Universal studios and was changed. This theory was more or less confirmed by Mego VP of R&D Neal Kublan who said that Mego wouldn’t have intentionally made a Frankenstein figure that had a flat top.

Blue Haired Frankenstein is believed to be a quick fix on the part of Mego to correct any similiarities to the Universal Frankenstein make up, a similiar fix was done for Mad Monsters Dracula as well. There are not many known examples of blue haired Frankenstein in the world (Watch out for the recent reproduction figures) so the run time must have been limited on these figures. (Pic courtesy of Brian Heiler)

Sculpted haired Frankenstein retained the widest release of all Mad Monsters figures and remains the most commonly found on a type one body. 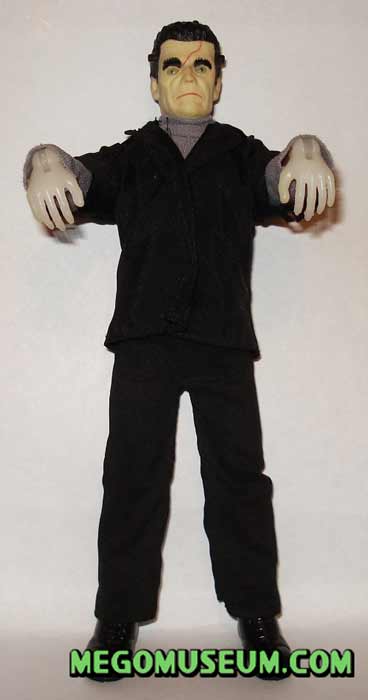 Frankenstein was released on a type two body as well but these can be prove difficult to find. Picture courtesy of Charlie Balicki. 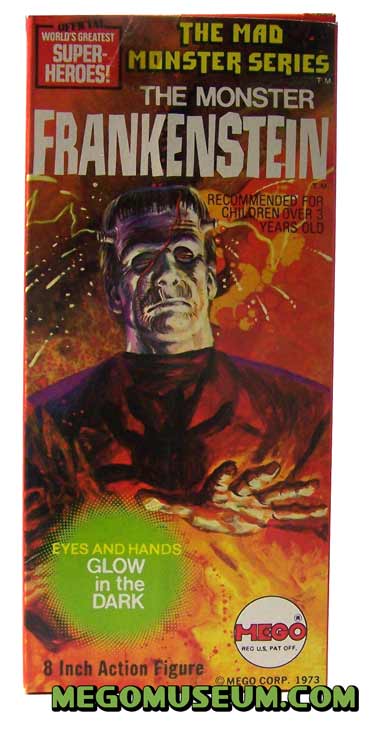 Frankenstein is most commonly found packaged in his original solid box, the artwork on this series was done by legend Gray Morrow who also created the packaging for the American West series. 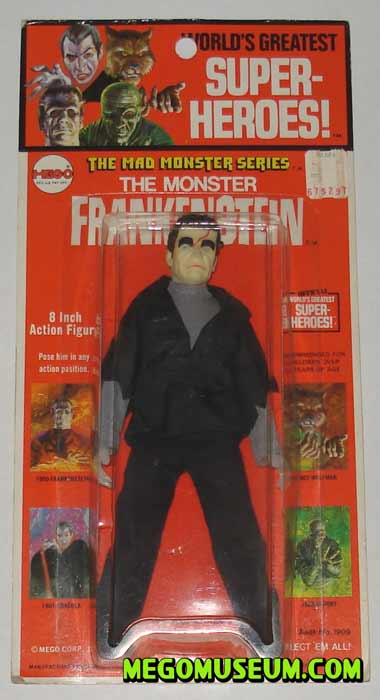 All of the Mad Monsters were released on Kresge Cards and remain difficult to find. Kresge Frankenstein from the collection of Charlie Balicki. 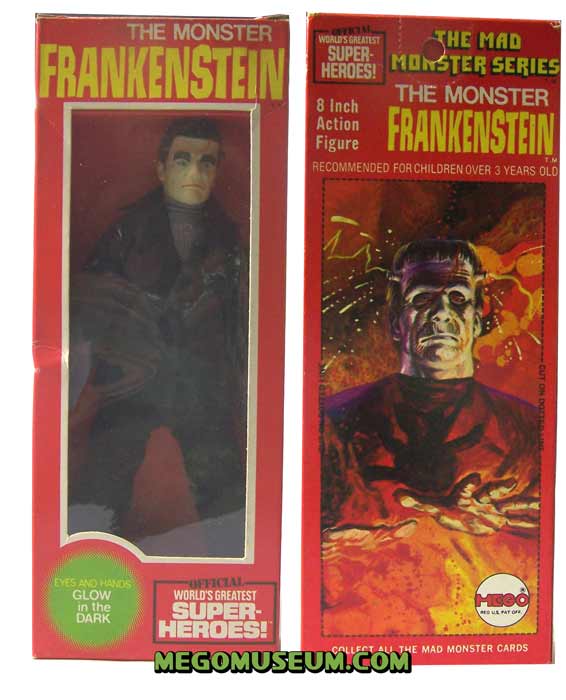 Mego briefly released the Mad Monsters in window boxes, one of the tougher sets to complete. Frankenstein courtesy of Brian. 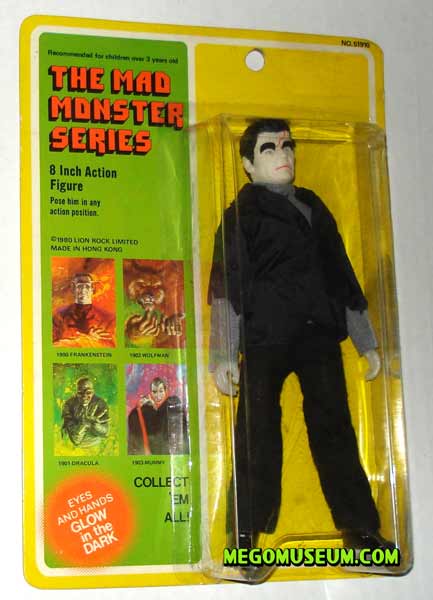 In 1980 the Mego Mad Monsters appeared on generic Lion Rock (a division of Mego) cards, these figures were on type 2 bodies and varied slightly from the originals. They remain very hard to find, from the colection of Charlie Balicki. Also see the American West Gallery for more examples of Lion Rock cards. 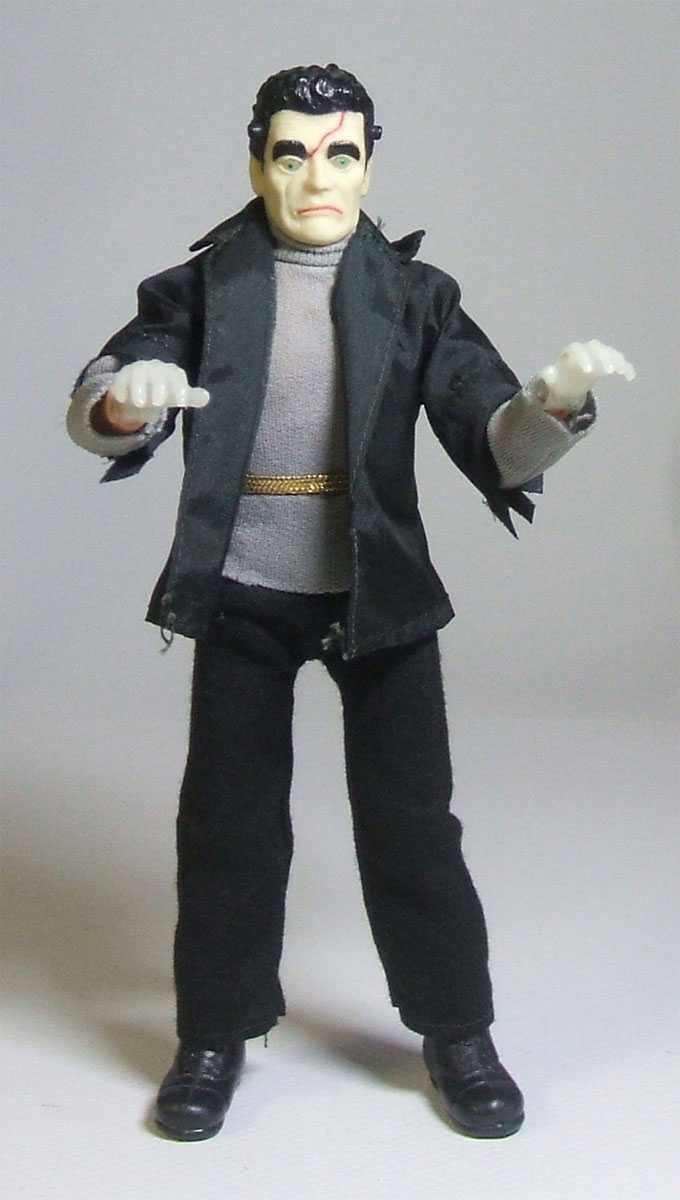 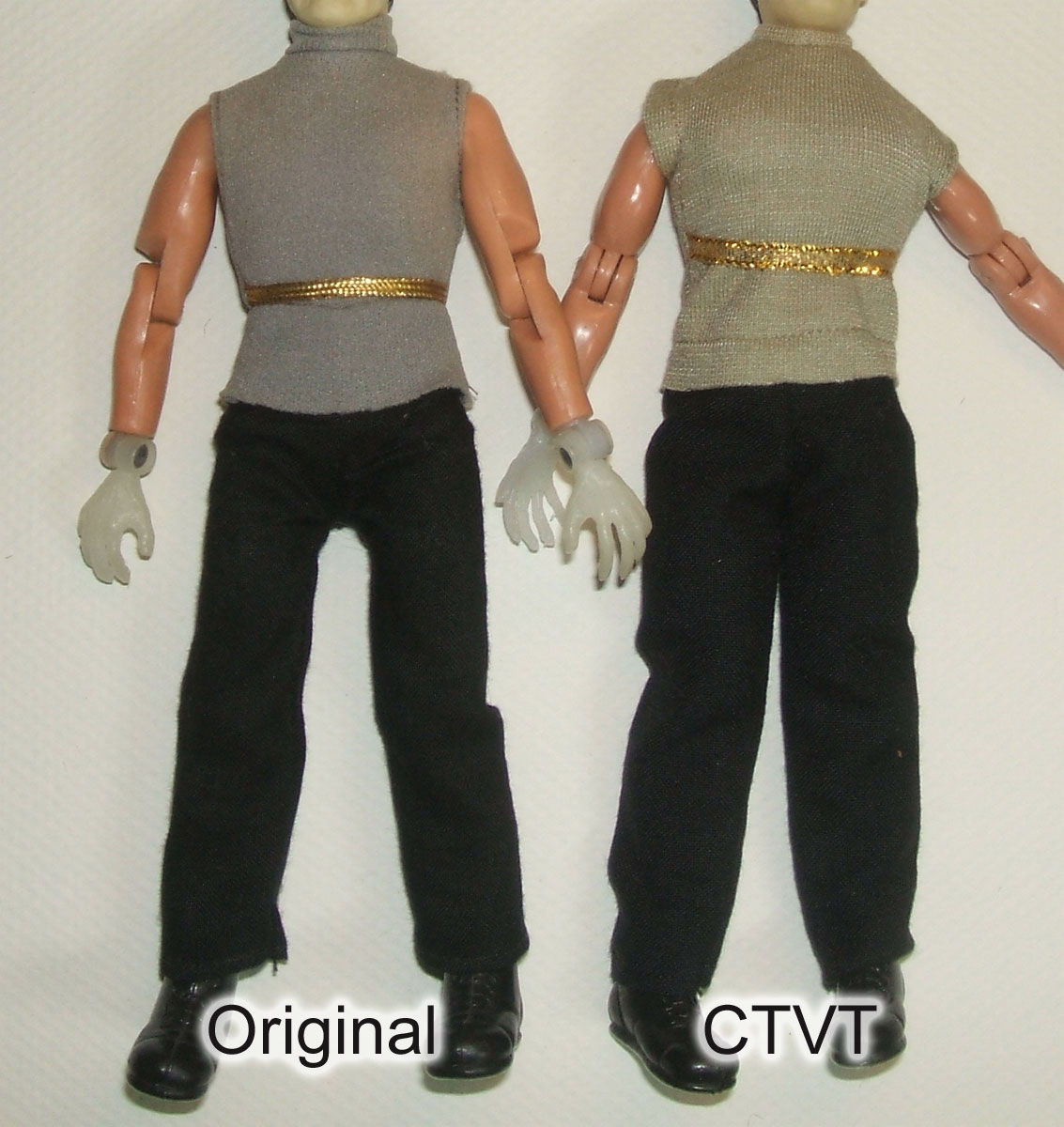 Frankenstein’s pants and shirt are a sewn together as one piece with a belt sewn in as well. This combo has been reproduced by Classic TV Toys. The shirt portion is sleeveless. On the original there is no hint of of any material going over the shoulders, while the reproduction has a hem that sticks out over the shoulders a bit. The reproduction has a shorter turtleneck than the orginial and is made of with a lighter color shirt material that has a tan look to it, instead of the pure gray of the original. The belt on the repro is also sewn in higher up the waist than the original. The repro suit is unmarked.

The sleeves of Frankie’s shirt are actually sewn into his coat sleeves. The coat has been reproduced by CTVT. The shirt sleeves sewn into the coat are, like the shirt portion of the suit, made from a lighter, almost tan looking material, while the original is more pure gray. The original coat is tailored to have lapels where the repro coat doesn’t fold over well to create the lapels. The torn coat sleeves of the coat on the repro are shorter than the original and the repro is unmarked.

Frankenstein wears a short version of the Mego combat boot also found in the Action Jackson Navy set and on the Planet of the Apes Astronaut. Classic TV Toys has reproduced the boot. The reproduction is a touch smaller and has more flashing evident. The reproductions are unmarked. CTVT also makes a full lenth combat boot (see Soldier Ape in the POTA section) and this boot can be cut down to make an almost factory reproduction of the short Mego combat boot. The full size combat boot reproduction is a very soft rubbery material when compared with the original and is also unmarked. Mego also produced the Mad Monsters under the banner of their Lion Rock name. The boots worn on the Lion Rock versions of the Monsters differ from the original Mego version. The LR boots are more clunky and less rounded looking. The original Lion Rock boots have not been factory reproduced.

Original Frankenstein, like the other original monsters, has glow in the dark eyes, which sometimes suffer from what is called “eye melt”. The material used in the making of the glow in the dark eyes can sometimes turn to goo. Frankie’s head has been reproducted by CTVT but without the plastic made glow eyes, the repro head has painted glow eyes. The CTVT head is a little shorter and the features are not as defined. The repro is unmarked.