Mego’s Heroes of the Wild West series featured 6 historical figures. Of all of Mego’s public domain series, it seems evident that the Western series was one of the strongest sellers.

NEWS FLASH Thanks to smart detective work by our own Ron (Stabilio), it has recently been proven that the American West Boxes were in fact drawn by the late, great Gray Morrow. This important fact ends years of speculation as to who drew those great boxes. Gray’s signature is noticeable on the Buffalo Bill box.

The series was available in solid boxes and Kresge Cards (both offered around the same time). Foreign distributors in Spain and Germany offered their own unique packaging (click on the galleries to view). In Italy the line was transformed into Tex Willer based on a best selling Western comic book series. A cash strapped Mego produced the Western Heroes on Lion Rock Cards in 1980, later Timee Toys reproduced the series using cheaper materials.

A complete history of the Mego American West Line. 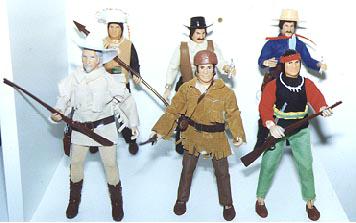 Mego Dodge City playset was not produced however the basic structure (two vinyl halves) was used for theMego Batcave , Planet of the Apes Village and the Action Jackson Lost Continent playsets.