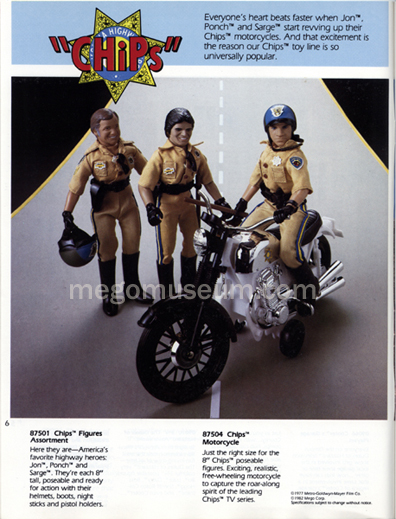 After taking the airwaves by storm in 1977 Jon and Ponch were immortalized in Mego plastic and fabric in 1981-82. Forever young, yet their heads often suffer from migration, aka Zombie disease. Eric Estrada isn’t dead yet, but his corpselike face can often be found in discount bins at toy shows…

The popularity of the show sold quite a few of these  things for Mego between during their final sad 2 years. 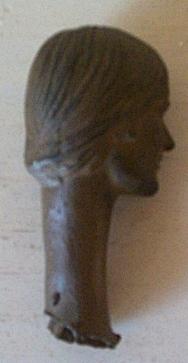 There were no villians in the 8: line although Mego had proposed adding Chopper from the Starsky and Hutch line, buyers balked.

This is the actual head prototype for the never produced 8″ Chips Officer Steve McLeish action figure.  In 1981, Bruce Jenner had joined the cast of Chips, and  Mego was all set to issue a figure when Jenner left the show.  This is the head test shot made of bronze, from a sculpt by Dana Green. 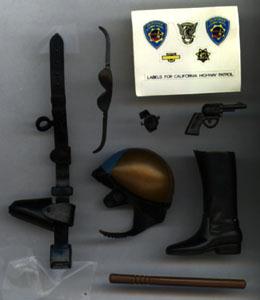 You get a lot of cool stuff with your Mego CHIPS figure. Gun belt, sunglasses, insignia stickers, watch, gun, helmet, cop-boots, and baton. 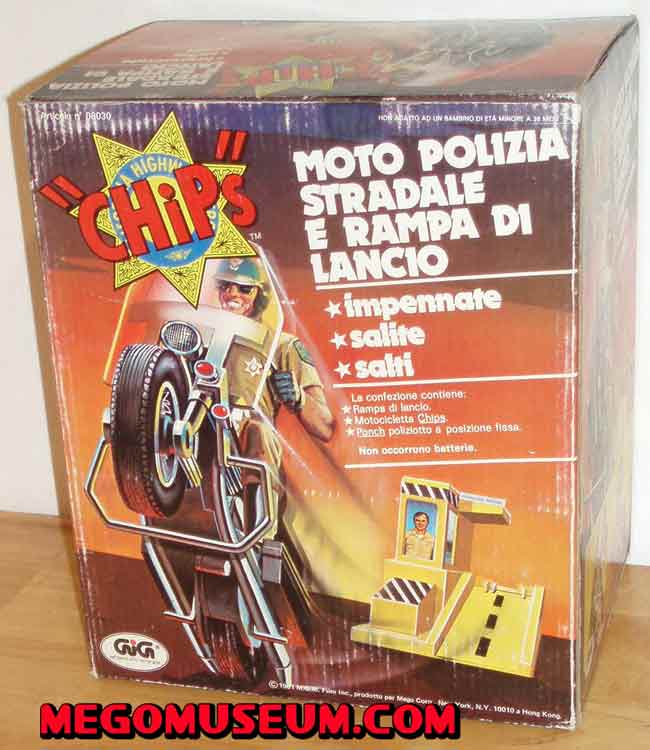 Mego also marketed a bike luancher set similiar to the Evel Knievel sets that were very popular in the mid seventies. This particular set is from Italy and is courtesy of Olmo Giovannini. 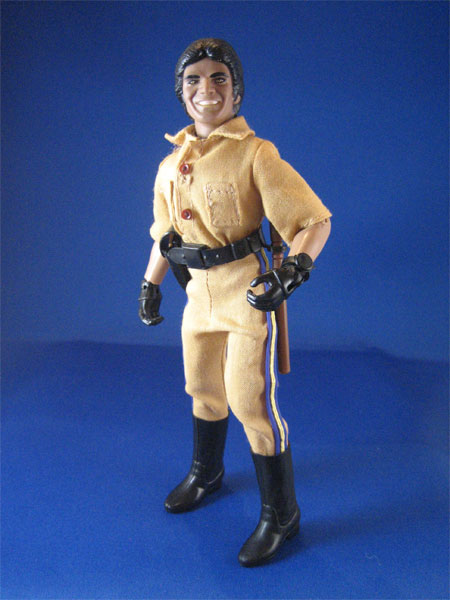 While an authentic enough portrait of 1970’s uber-celebrity Erik Estrada this
may be one of the more disturbing Mego figures. All CHiPS heads tend to turn
Zombie grey, but Erik, with his odd yellow eyes can become especially creepy. 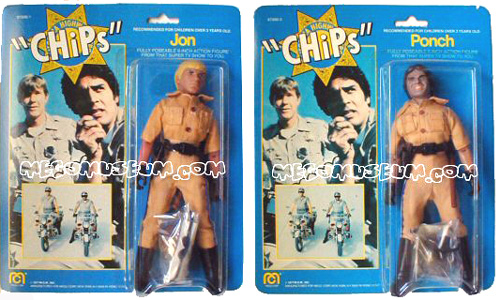 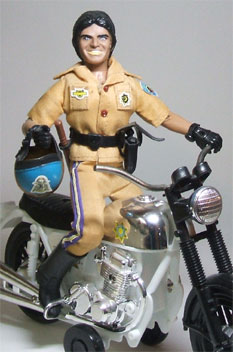 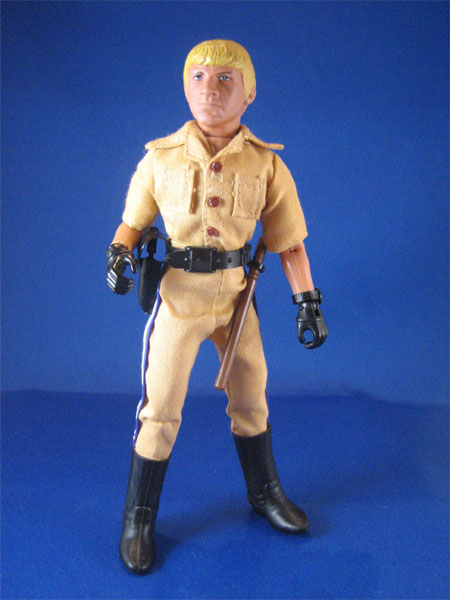 The Jon doll based on actor Larry Wilcox. 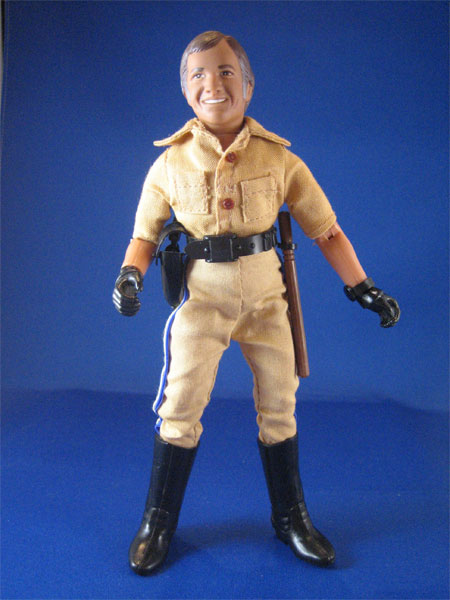 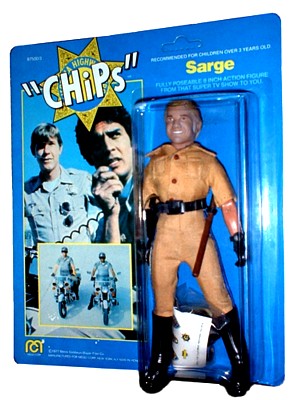 Sarge was a later edition to the line which initially just
featured the principles.Carded CHiPs figures are still easily had, finding
minty examples is another story (Sarge courtesy of Micheal Farence) 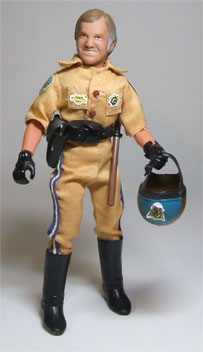 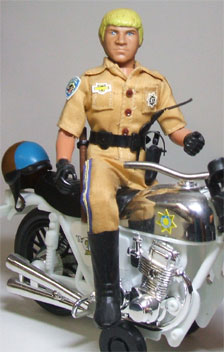 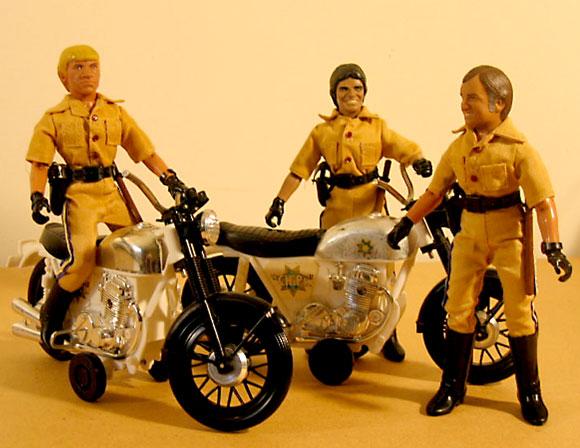 The CHiPS bike is a re-use of Fonzie’s motorcycle. It’s a non-powered bike
with training wheels at the center. The chrome on the gas tank tends to lose
it’s luster. (Remember
trying to ride your bicycles in formation?) 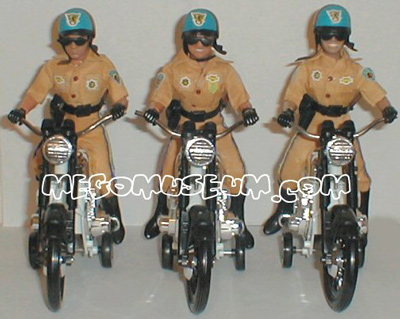 Tom provides us with shots of the CHiPs motorcycle, no Mego CHiPs figure
should be without their mad wheel. Those smiling faces would sure get alot
of bugs in their teeth… 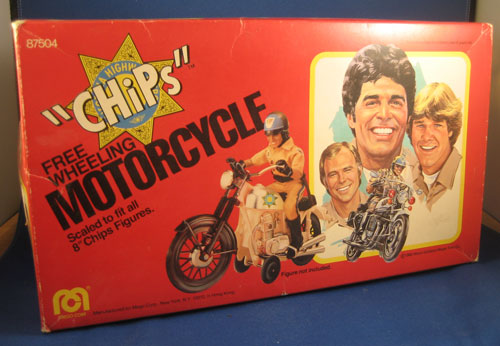 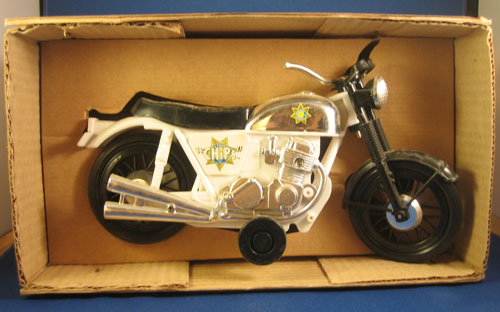 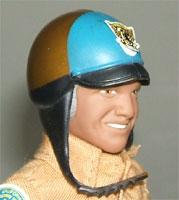 All three Chips figures came with the same helmet of blue and gold. The helmet is subject to fading so the colors vary. This helmet has not been factory reproduced.

Billy Club, Night Stick, Baton, whatever you want to call it, all three Chips figures carry the same club. This club has not been factory reproduced.

The Chips figures come with a utility belt that has a holster for their pistol and a holder for their club. This belt has pockets molded on it and has not been factory reproduced.

The Chips figures carry a black pistol unique to the line which has not been factory reproduced.

When you graduate from Chips school, you get issued your standard tough guy cop sunglasses and the characters in this line all have them. They are solid black and have not been factory reproduced.

The Chips characters come with a black wrist watch that has not been factory reproduced. 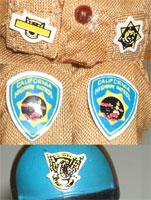 Jon and Ponch come with a 5 piece sticker sheet featuring a badge, generic name tag, shoulder patches and helmet sticker. These do not come pre-applied to the characters, they come on a sheet. The stickers have not been factory reproduced, but there are a lot of high quality home printed sticker sets floating around.

All the Chips figures wear the same boots and they are unique to the line. Well, kind of. They are cut off Klingon boots, but the factory cut off boots only appear on the Chips figures. These boots have been reproduced by Cast-A-Way Toys. The reproductions are a much different material than the originals. The originals are a firm plastic. The reproductions are a soft rubbery material and thicker. The repro’s are also much more flat black than the originals. They are marked CAT on the bottom. Also pictured are photoshop similated cut off Klingon boots. By cutting off the tops of original Klingon boots, an almost factory Chips boot can be made. Classic TV Toys has reproduced the Klingon boot and they can be cut off to create the Chips boot as well. The CTVT boot has a rough texture to them, and they are marked CTV on the side. 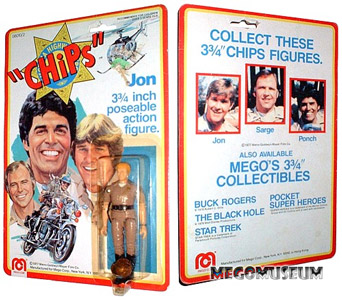 Carded 3″ Mego Chips Jon, note that the back also
promoted other lines such as Mego
Pocket Heroes, Buck Rogers and Black Hole. In the late 70’s Mego was trying to cross promote their 3″ lines
much of this was the appeal to the 8″ line. 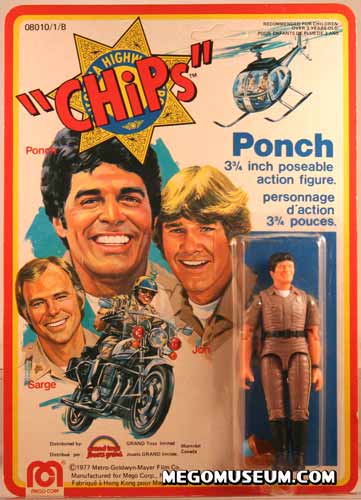 Carded Ponch, this is Canadian Grand Toys Card and is much more difficult to find, courtesy Craig MacKillop. 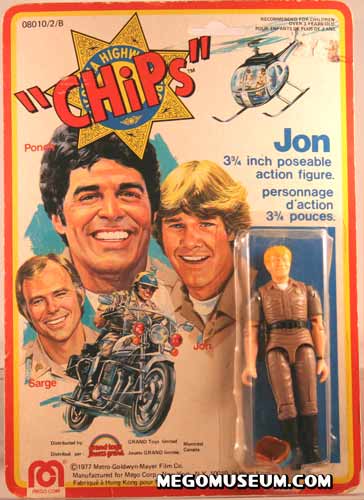 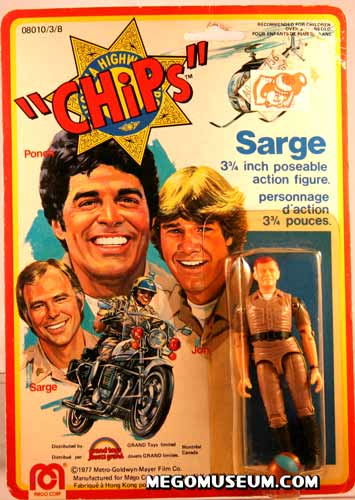 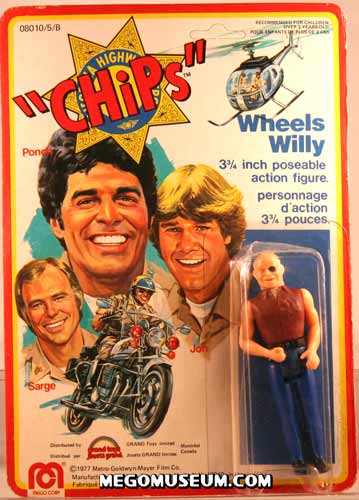 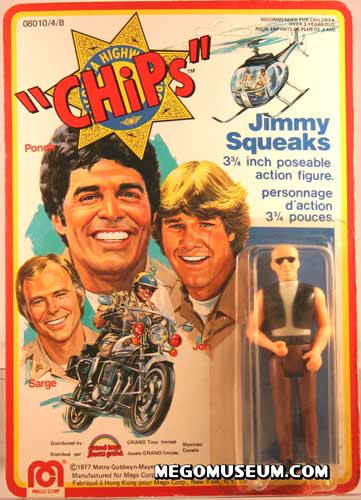 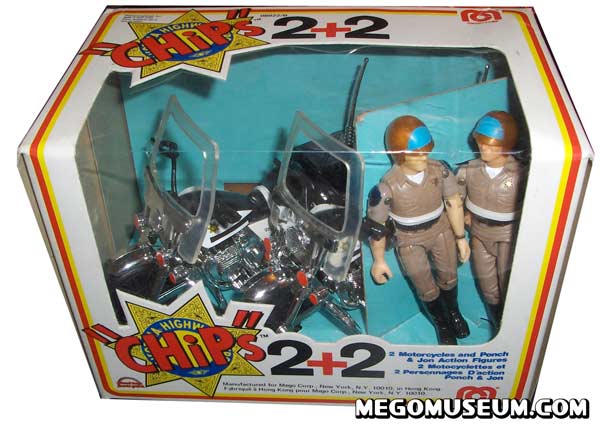 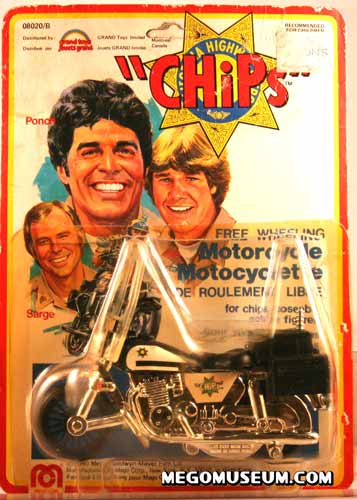 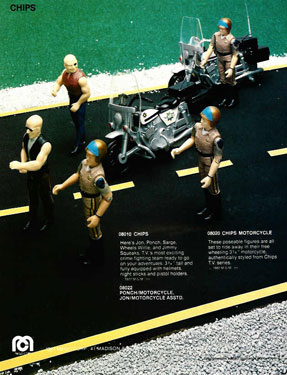