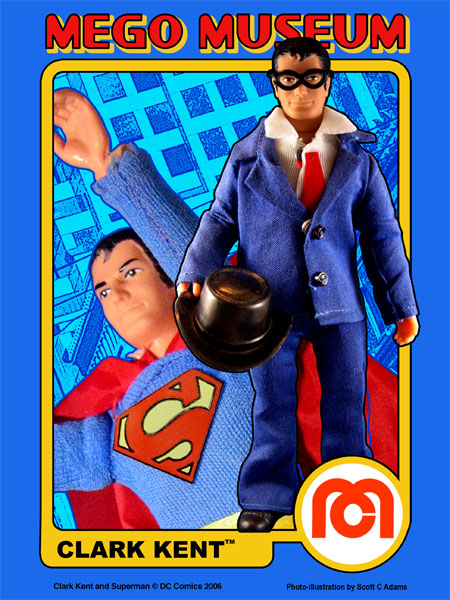 The most faithful figure of the secret ID’s, Mego Clark is also
the best looking figure. He comes decked out in Superman Blue with
a red tie (of course). 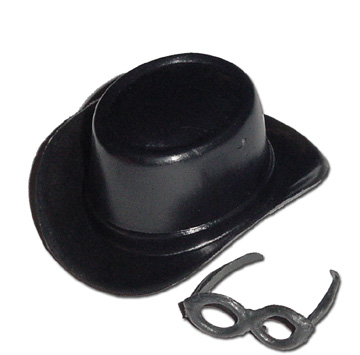 Here is a closer look at clarks accessories including his delicate glasses which were probably the first piece that went. The hat, often thought to be a cowboy hat is unique to Clark. The hat is difficult to fit on as the picture demonstrates. Clark is of course, just a Mego Superman head with glasses added on. The head was also  used as Mego Dinah-Mite’s boyfriend Don.

Just to clear up any confusion on the subject of hats, Clark Kent’s hat is unique and cannot be repleaced with Wild Bill Hickok’s. See the above photo for the obvious comparison. 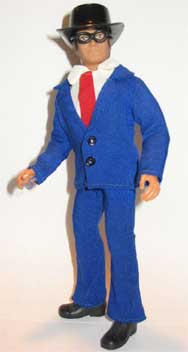 Clark Kent and Superman share the same head. An orginal CK head is unmarked while an orignal Superman head is marked with the NPP DC copyright info on the back of the neck. The head has been reproduced by Doctor Mego. The DM version is a firmer plastic, less flexible. It is also thinner in the face. It is marked DM on the back of the neck. It should also be noted that Mego used the Superman/CK head for Dinah’s boyfriend Don. Like Clark, the Don version also has no copyright information on the neck. It should be noted that there is some indication that the AE/SI heads have a somewhat unique color compared to the standard WGSH. Less red in the mix, making them more “mocha coffee” in color. This can’t be proven 100% due to the rarity of the figures and the way they were packaged and sold, but it seems to be true in most cases. The best indicator for Peter Parker is still the altered paint, but for characters like Bruce Wayne, Dick Grayson and Clark Kent, this color shift is a good indicator.

Doc Mego makes a reproduction of the CK suit. The color is a brighter blue than the orginal. The coat on the repro has bigger black buttons and they are positioned higher up on the coat. It is stamped DM on the inside near the collar.

Clark’s shirt/tie has been reproduced by Doc Mego as part of the suit package. The shirt is very similar in material to the original, although much whiter and the weave of the material goes the vertical instead of horizontal. The shirts are unmarked.

The pants from the reproduction Doc Mego set are the same brighter blue as the coat. Brighter than the original pants. Otherwise they are very similar. The pants are unmarked. 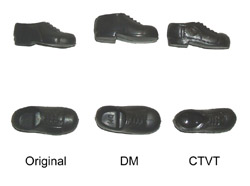 There are no factory made reproductions of Clark’s hat available and it is unique to the character. Often you will see a Wild Bill hat from the western line on Clark as a replacement, however, the hats are not the same. Clark’s has a much bigger crown.

There are no factory made reproductions of Clark’s glasses available and they are unique to the character.