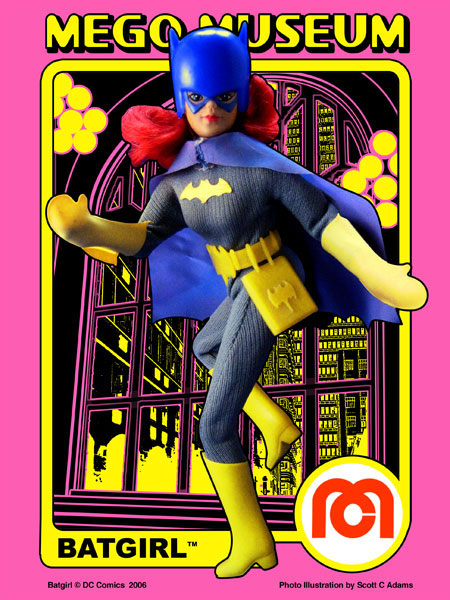 Batgirl was released in the 1974 Supergals wave along with Wonder Woman and Supergirl. She is an absolute fan favorite. The figure itself presented a unique attempt to create a Removable Cowl, the helmet is removable but the face mask is painted on. The outfit is highly detailed with a purse with attached bat belt (often snapped off on loose examples) and “bat boots”. 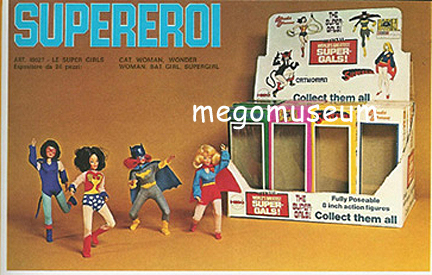 The Supergals wave was released in their own store counter display box: Very few survived. To learn more about Mego
Store displays
click on the above pic. 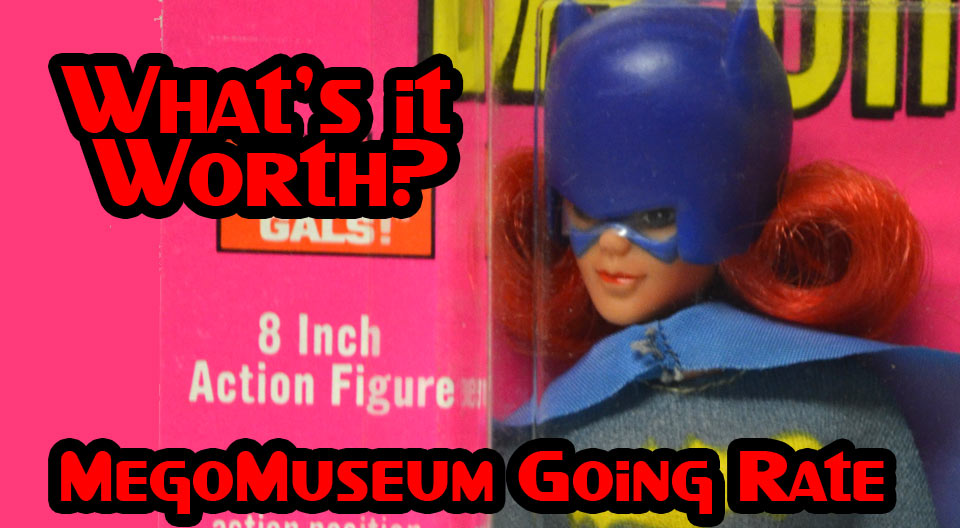 Find out how much Mego Batgirl has sold for in the past with our archive of Ebay auction results. 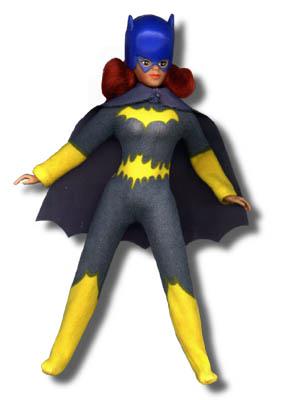 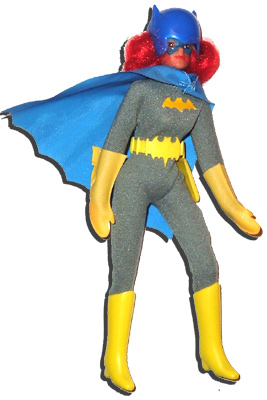 On the left , Painted-suit Batgirl. The earliest version of the figure, she did come with gloves, but is pictured without them to illustrate the sleeves. The painted suits (or silk screened supergals) were made this way so they could be rushed to the marketplace for Christmas (Mego couldn’t wait for tooling!) Didn’t come with boots. I must say, and this is not a phrase I use often, but in this place it’s just so true: The yellow on the painted suit? Like Butter….Rich, creamery butter.

To the right, the last edition (straight arm) Batgirl. Mego switched the body styles of the Supergals by the end of the run, while it is possible to find Supergirl, Wonder Woman is tough to find in this later body style. 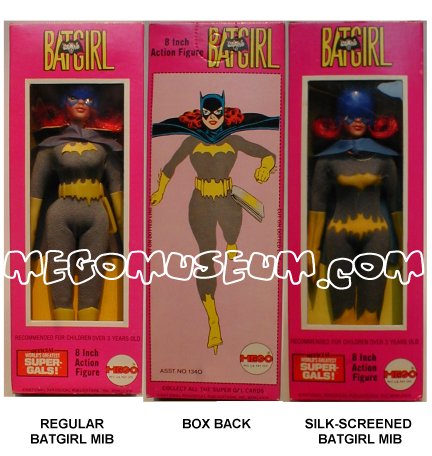 Examples of the two styles of Batgirl available boxed, the later body style Batgirl only came carded. Batgirl is one of the easier found Supergals but is also highly desirable by collectors so demand often affects price. It is interesting to note that despite her card having the 1979 artwork, Batgirl’s card has a date of 1977. It’s possible that someone goofed while printing as this particular Batgirl has the dreaded graying of the head common with ’79 carded heroes.(photos courtesy Tom) 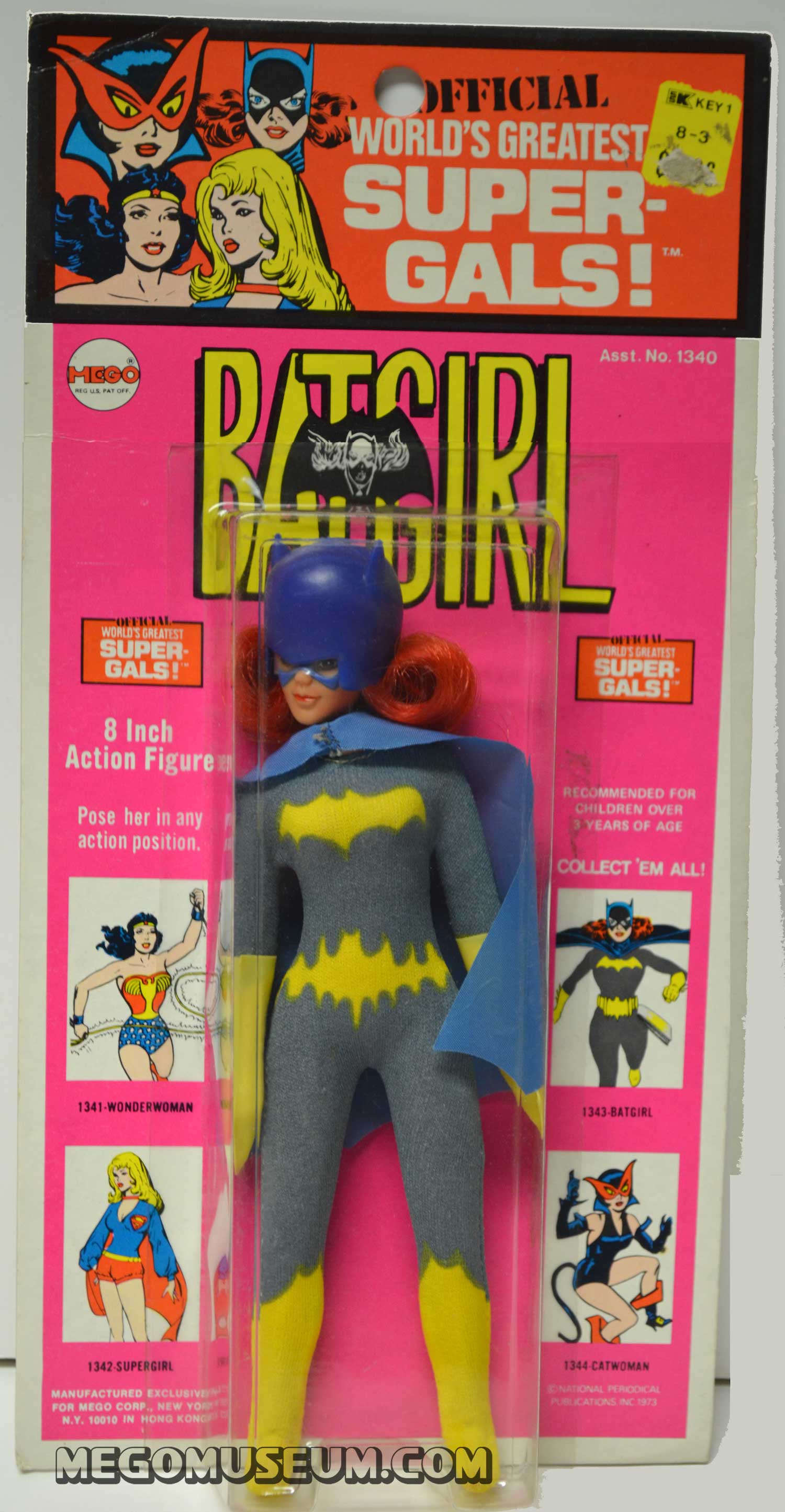 Silk Screened Batgirl on a Kresge Card, so pretty.

this shot is courtesy of Heroes West Coast (hey! Shop there). 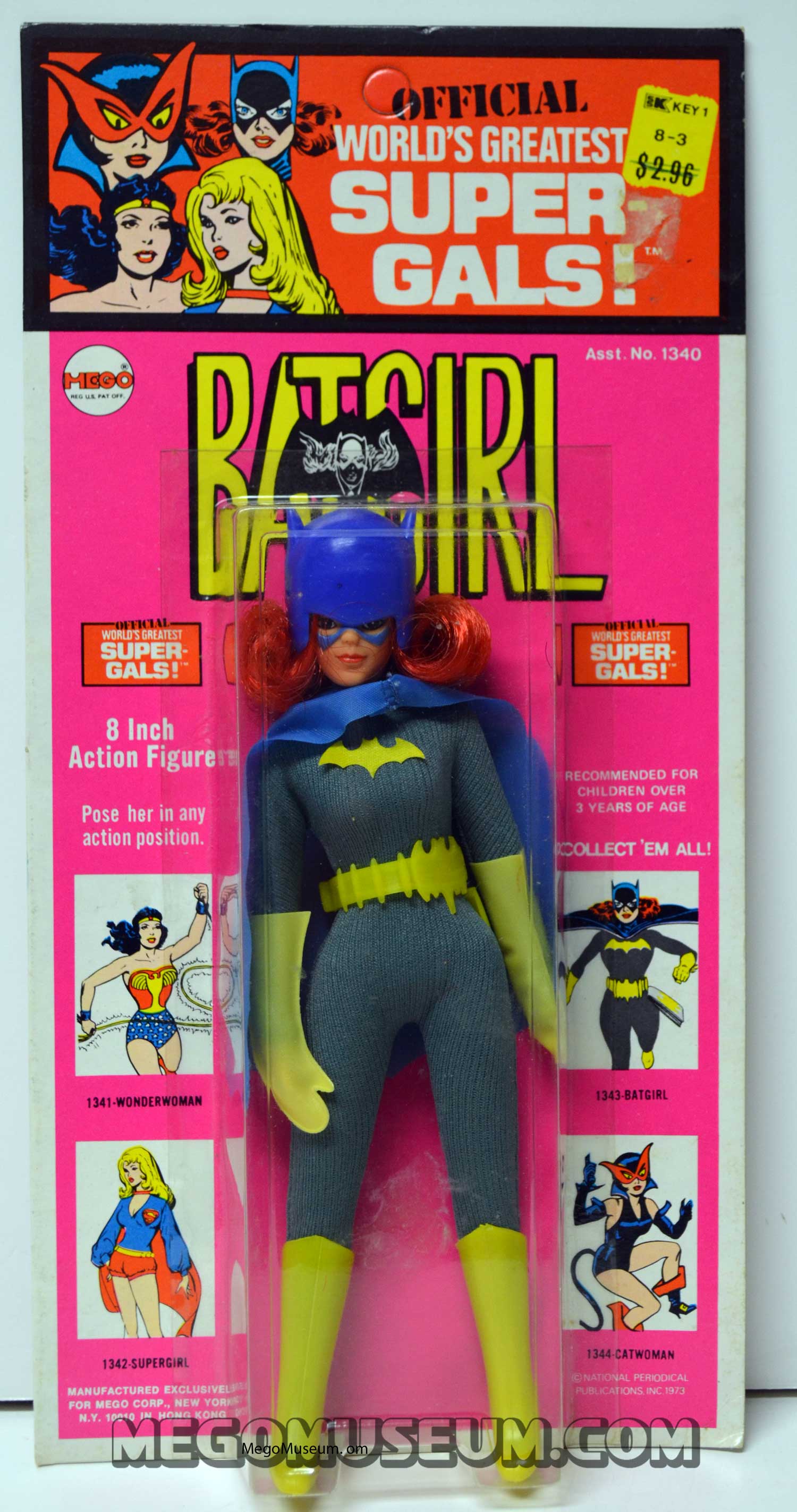 Kresge carded Batgirl, it’s very common on the secondary market to have the pre-printed price tages damaged in some way.

This shot is courtesy of Heroes West Coast (hey! Shop there). 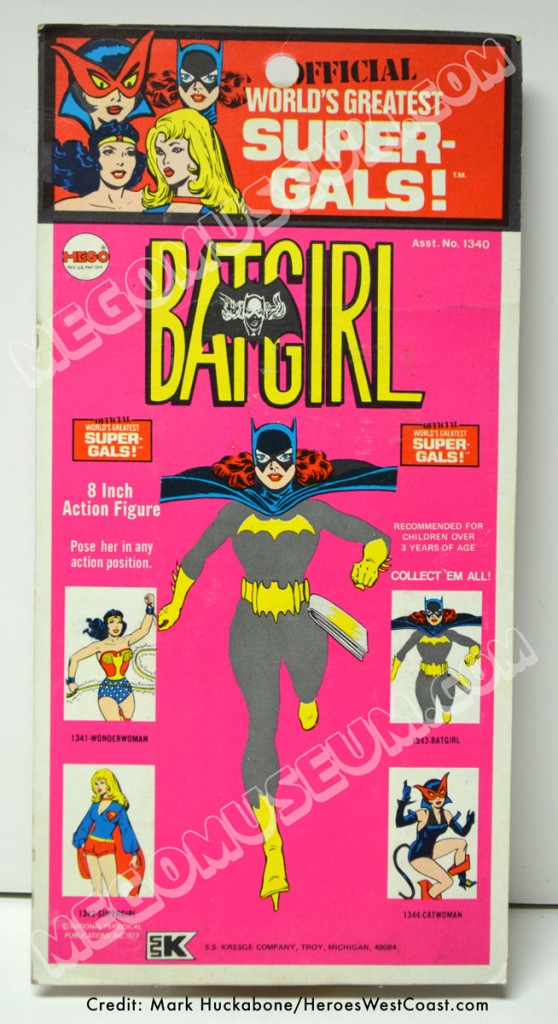 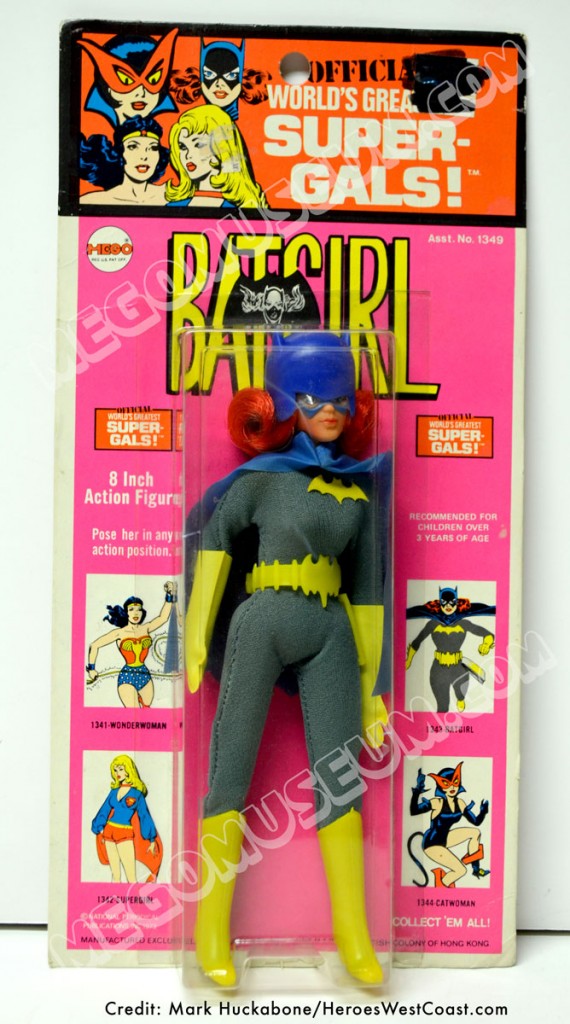 A black bat-logo overlays the Batgirl name on boxes and Kresge cards. It didn’t appear on later packages. 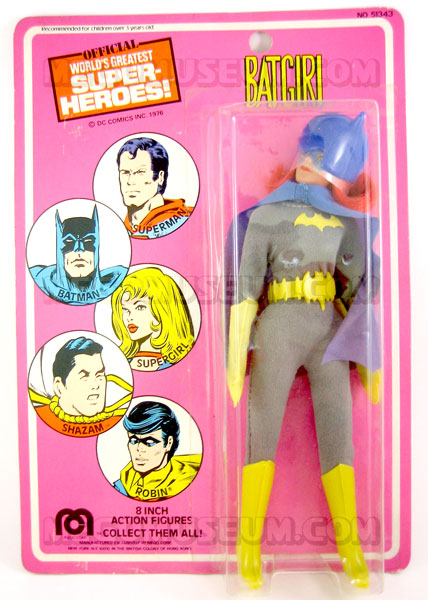 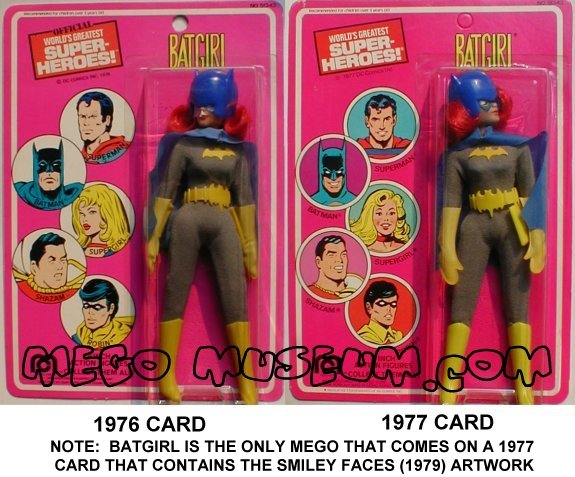 The US card styles of Batgirl courtesy of Tom. 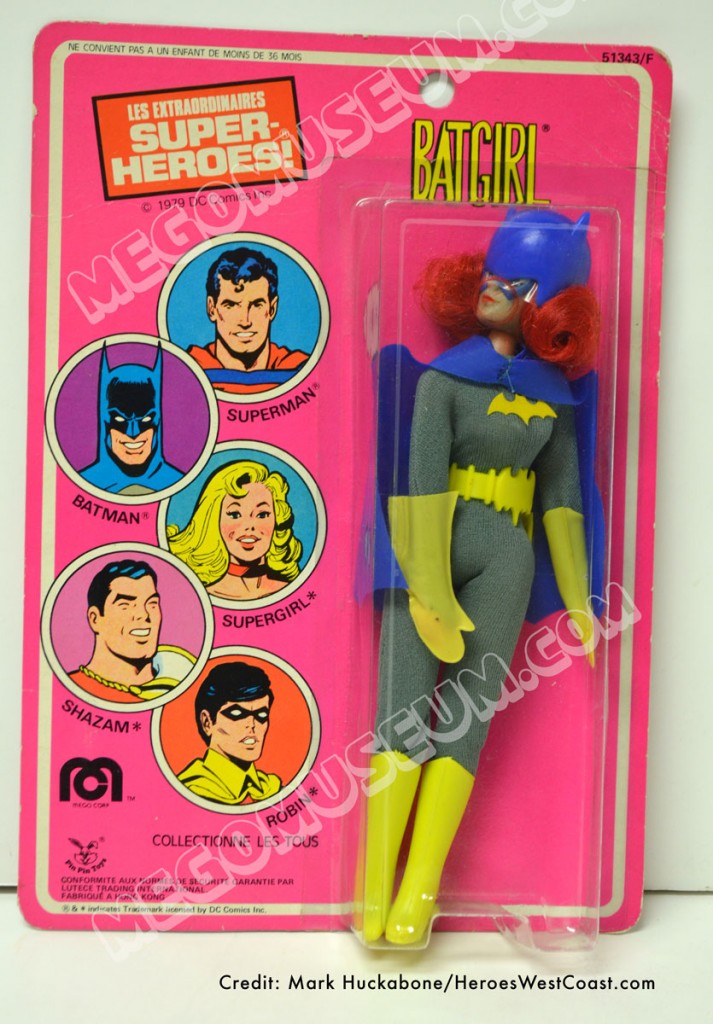 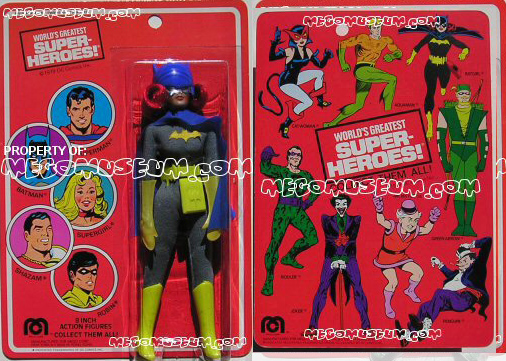 1979 Red Card Batgirl is a difficult to find. It is believed these unmarked red cards were created as a means to clean up inventory of WGSH that had been cut from the offering. Other known red carded heroes include Green Arrow and Aquaman. 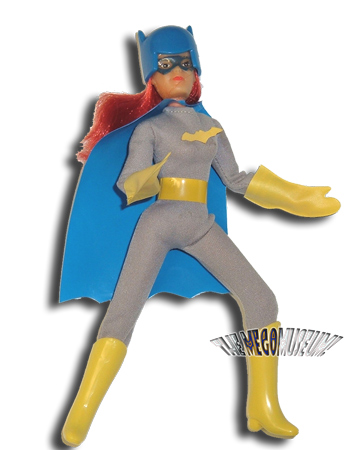 Here is Lili Ledy Batgirl (Batchica) in all of her glory.

The Batgirl clip art was different on the Lili-Ledy boxes. She is the only character so distinguished. A boxed example has not surfaced. 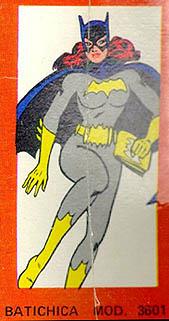 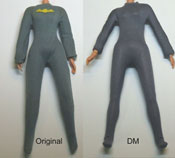 The common (not silkscreened) Batgirl suit is a plain gray female jumpsuit. Doctor Mego’s factory made reproduction version is a slightly darker gray and the material is a little slicker. DM’s suit fits more snug and can ride low in the crotch. DM is printed on the inside collar of the jumper.

Batgirl’s emblem is cloth. No original paper versions were made. Doc Mego has made a die cut paper replacement.

Doc Mego made the only Batgirl glove reproduction. Doc’s are textured similar to originals, although a little brighter in color and slightly different in shape. They are marked DM on the inside cuff.

Standard Batgirl capes come in a variety of shades of blue. Doc’s is the only factory made cape in town and is very accurate in design, although the color is a deeper than the average loose Batgirl cape. DM is printed on the inside back.

Doc Mego produced the only known factory made Batgirl belt. The pointed parts are a little more dull on the repro, the purse is a little more square as well. An original Batgirl belt’s purse has a slight taper going up towards the belt. The reproduction is more opaque than the original and is stamped DM on the back of the buckle. 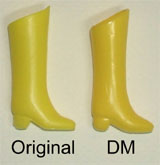 Doc Mego has reproducted Batgirl’s boots. In general, DM’s boots have a thicker plastic and are more rounded around the edges. They are stamped DM on the bottom.

All Batgirls feature a removable cowl. Doc Mego provides a reproduction, although it is different from the orginal in many ways. Doc’s cowl is a thicker plastic and more blue. Original cowls tend to look a little on the purple side. It is shorter and has a more rounded front. It is marked DM on the inside.