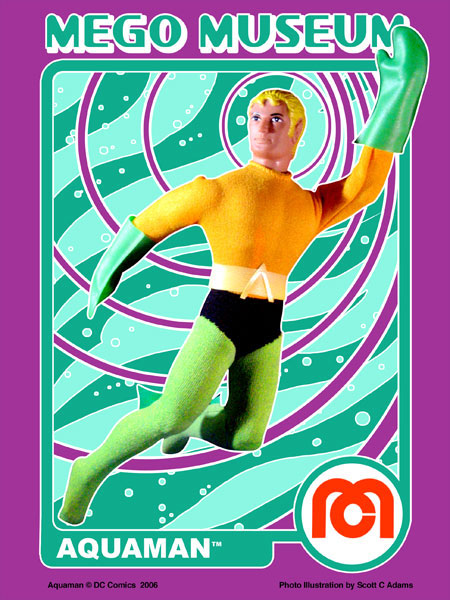 The Defender of the Depths was one of the original four World’s Greatest Super Heroes produced. When the Museum asked Neal Kublan the former VP of Mego why Aquaman was chosen, his recollection was that Aquaman had a cartoon running with Superman, Batman and Robin. No doubt these were reruns of the Filmation cartoons of the 60’s, so we have them to thank for this great character.

There is a lot of speculation as to the origins of the artwork on Mego packaging, while we have found much of it at the Mego
Comic Book Connection The artwork for many remains shrouded in mystery. None more than Aquaman The Sea King’s Mego artwork has only been seen on Mego packaging. 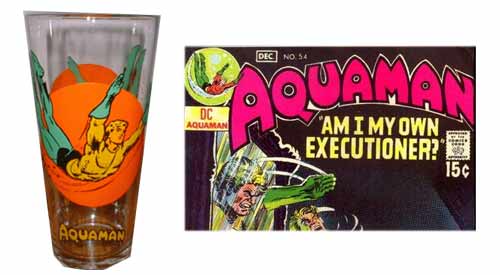 By the late 1960’s DC had started using this image of Aquaman swimming in the corner of their books, and, as the attractive, dynamic image found it’s way onto many liscensed products such as the 1976 Pepsi glass and the 1974 Our Way Studios Stickers. In fact, this image is the definitive Aquaman image of the era.
So why not on the Mego Aquaman box and Kresge card? Instead, the character is in a running pose. Say what you will about Aquaman, but “runner” isn’t the first thing that comes to mind. 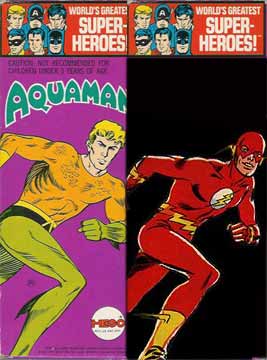 The image was most likely created because the stock circular design didn’t fit the rectangular box. Popular theory holds that Mike Germakian from LCA may simply have traced over this stock image of the Flash to solve the problem. 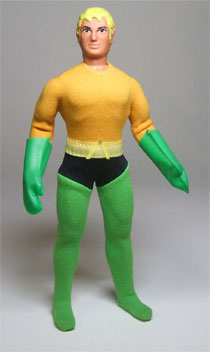 Major variations include: Sewn-on belt vs. late issue floating belt. Early issue Aquaman are prone to yellowing in the tights similar to Robins. A webbed handed Aquaman has been found and needs to be deatiled on this page. 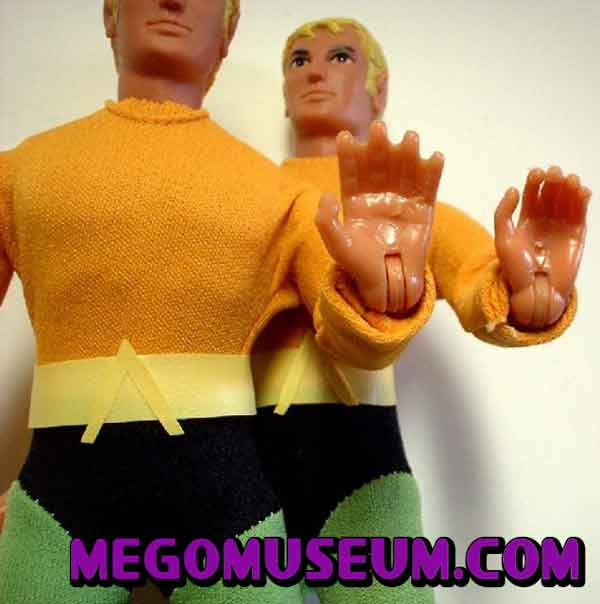 Leaping Lamprays! This web handed Aquaman figure was originally shown in the 1978 catalog yet no known examples have been found boxed. This sole figure unearthed by collector Roberto Ligotti is believed to possibly be the example from the catalog.

Aquaman By Mego
Return to Top 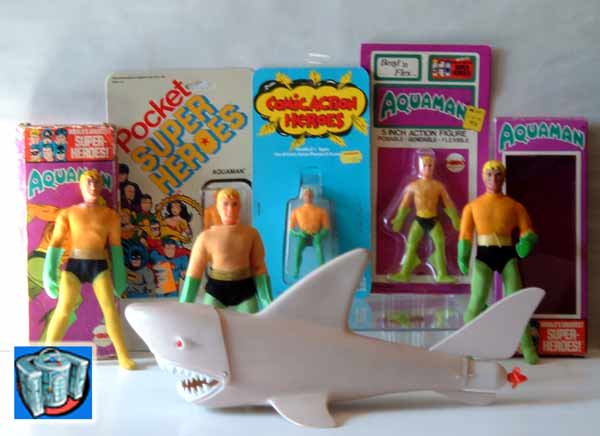 Just some of the many packaging variations and products Mego made for Aquaman, besides being in the  World’s Greatest Superheroes , the King of the Atlantis was also featured in other Mego lines such as  Comic Action Heroes ,  Bend N Flex and the
Pocket Super Heroes
. 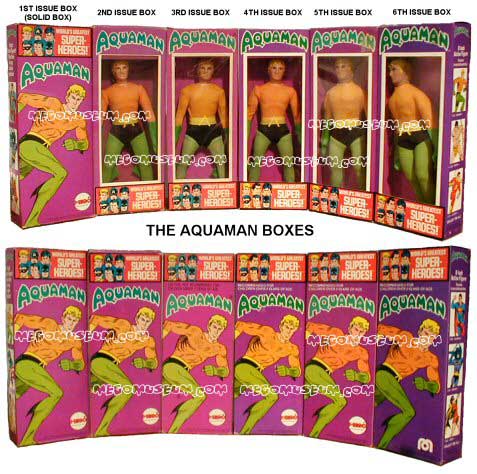 An overview of the Mego Aquaman box variations courtesy of Tom.

Solid Boxed Aquaman was the first on the scene and was the short pack figure (Only 2 per case!) Note the yellow leggings, which are believed to be not a factory mistake but an effect of age.

The pristine example below comes to us via our friends at Heroes West Coast. 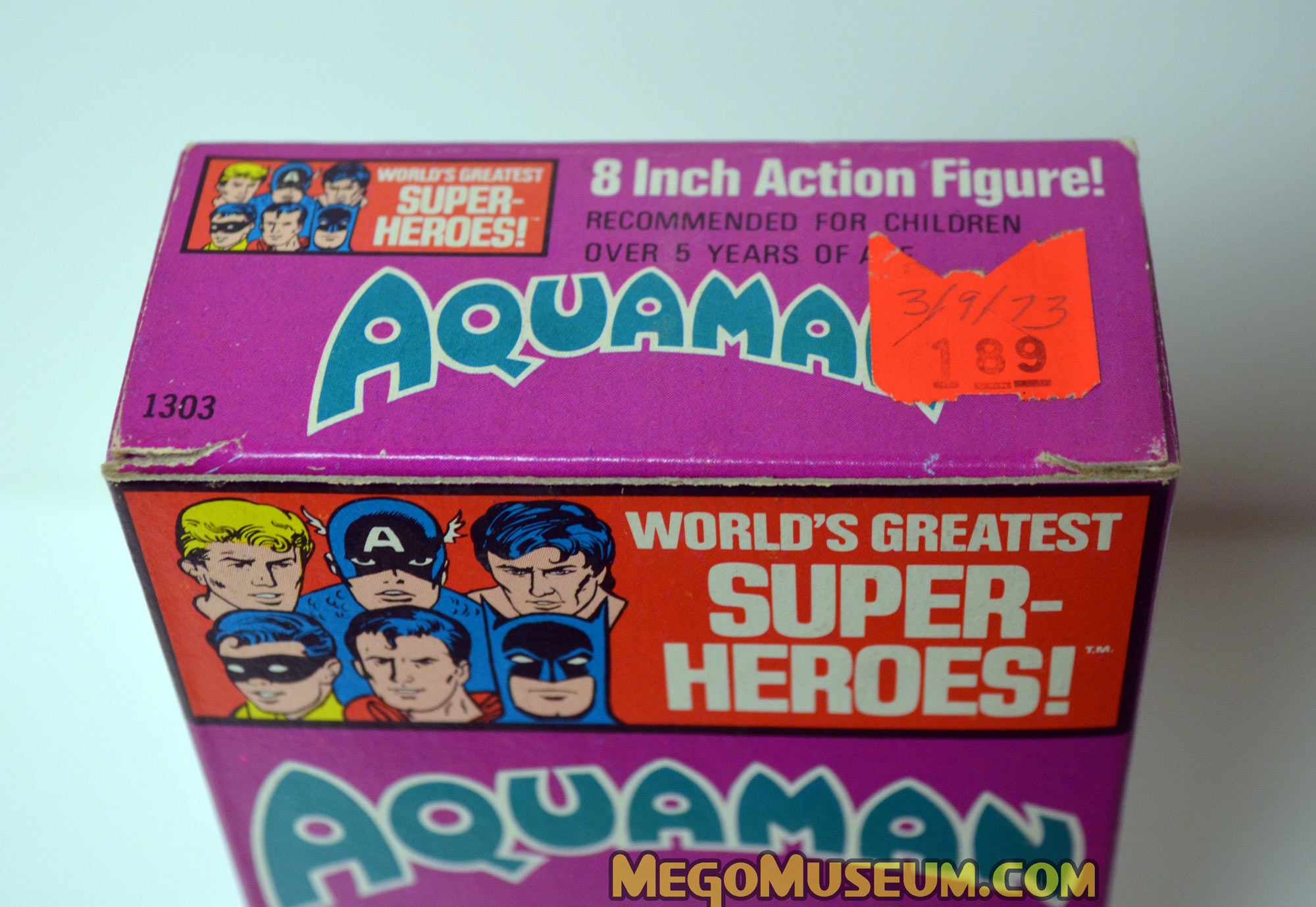 Note that the initial purchaser cataloged the purchase date on the price tag. 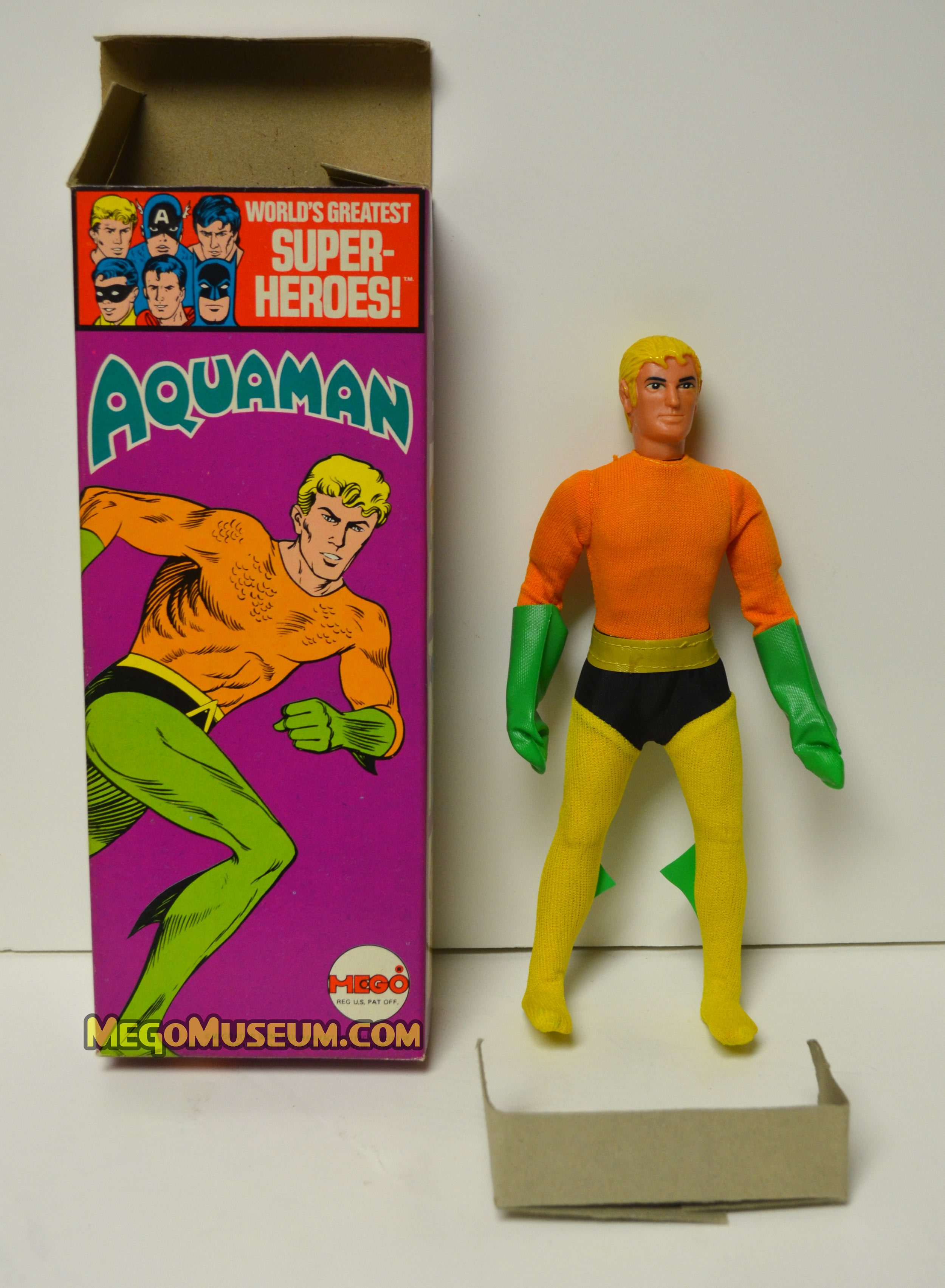 That little piece of cardboard is always missing from solid boxes and while bland, is quite rare. 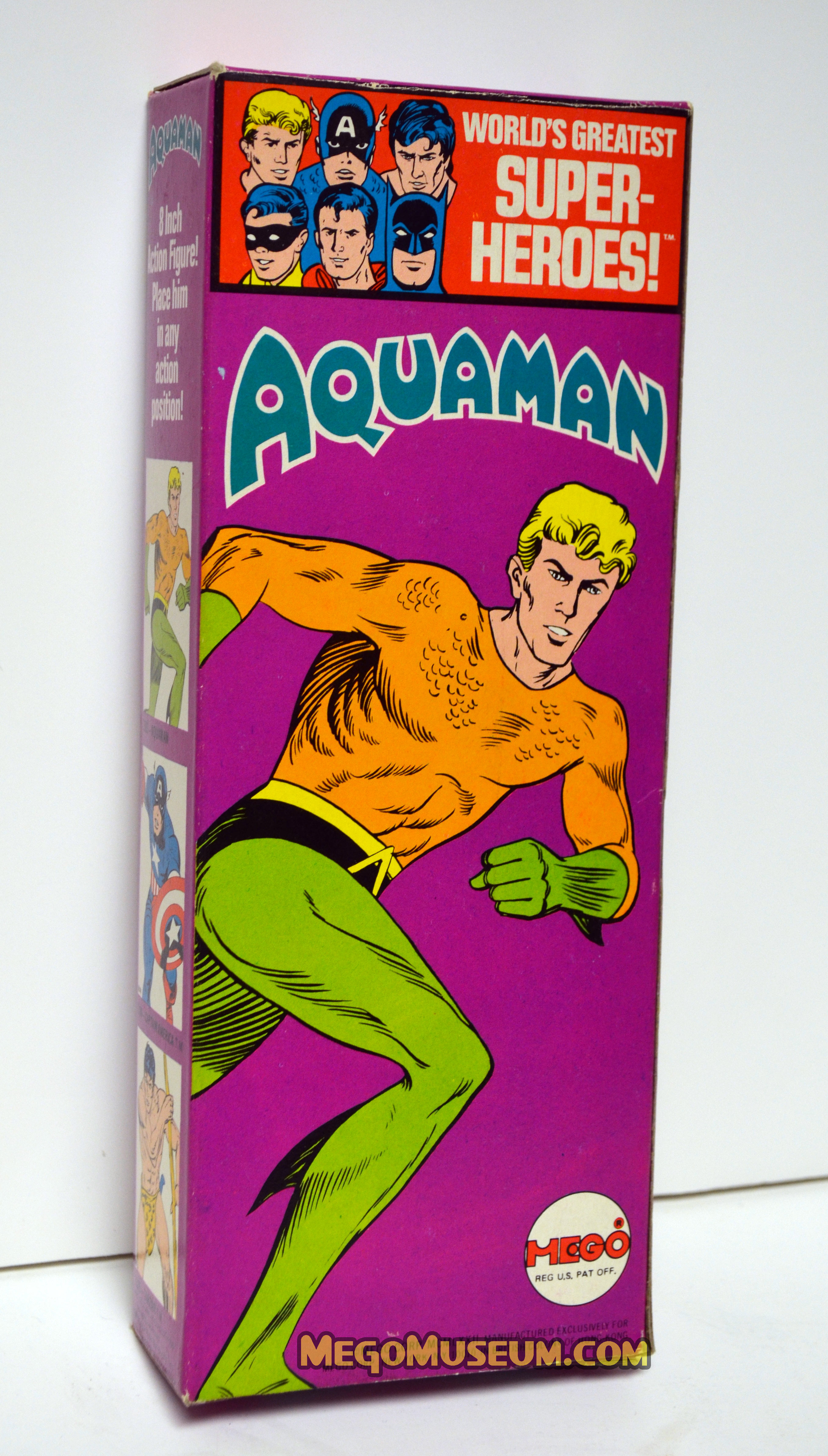 Thanks again to our friends at Heroes West Coast for this gorgeous example. 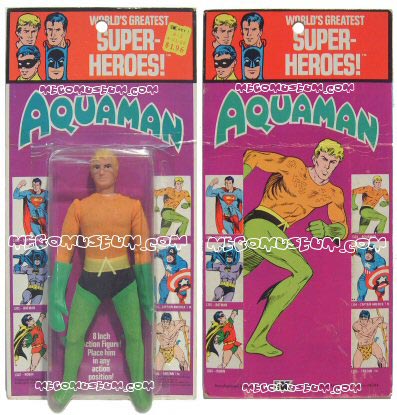 To a Mego collector, Aquaman is a bit of a nightmare to find on a card. Due to his short pack nature, Aquaman cards almost always mean hard to find. Above is a nice example of Aquaman on a Kresge card, one of examples the toughest to find. Thanks to Tom for the great photo.

New Discovery! The Third Series Mego “Kresge” Card for Aquaman. I use quotes because these early cards were sold elsewhere as the “Mason’s” price tag on this example loudly declares. It’s been rumoured to exist but it’s nice to finally see one, which is pictured with the first version Kresge version for comparison. 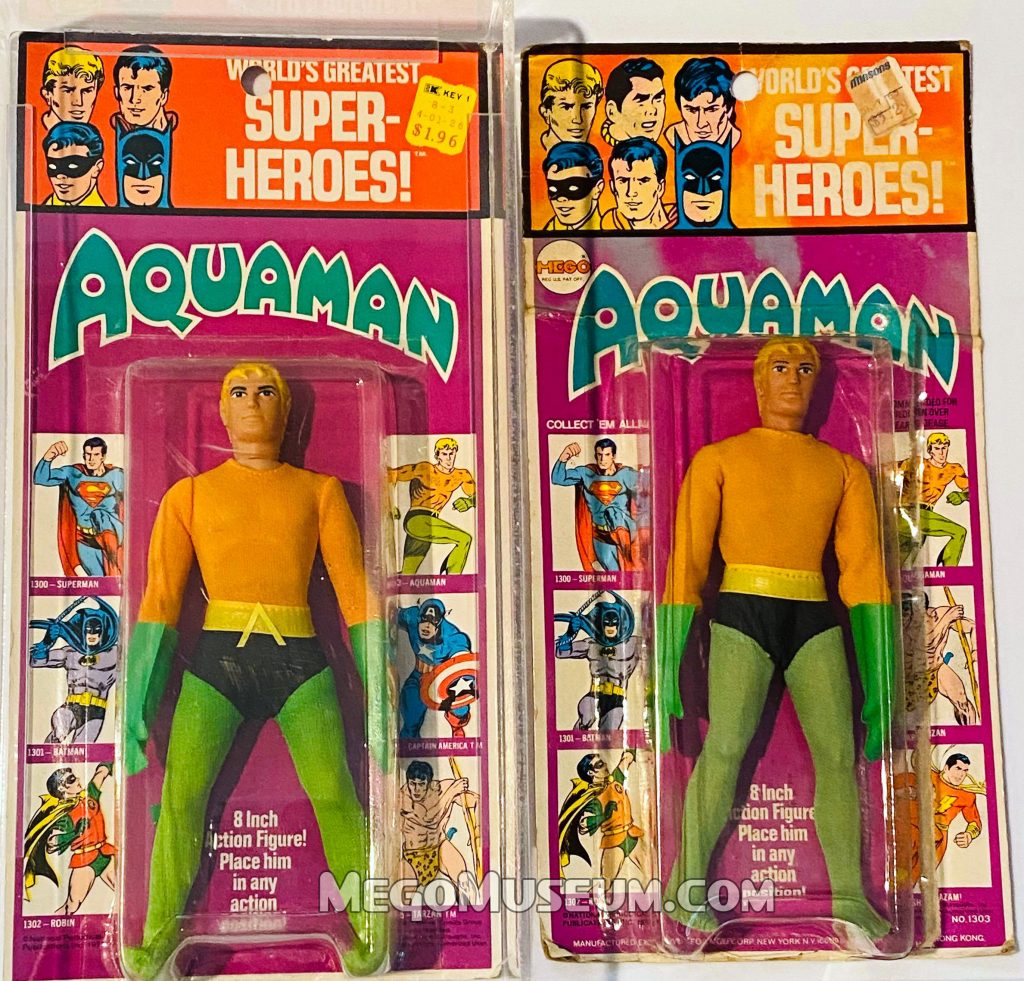 As you can the major difference in the card’s style (other than having no Kresge Branding) is the addition of Tarzan and Shazam! to the header and the removal of Captain America. 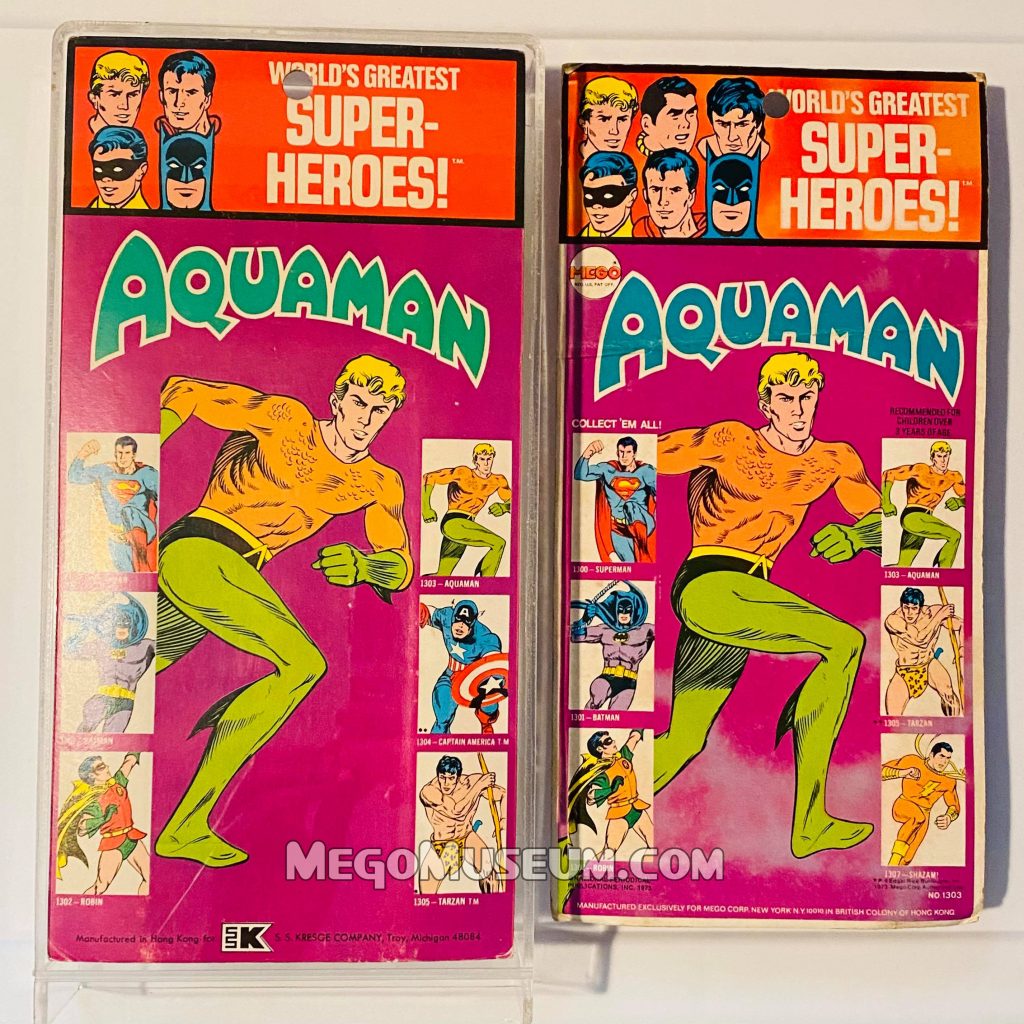 Aquaman US Cards
Return to Top 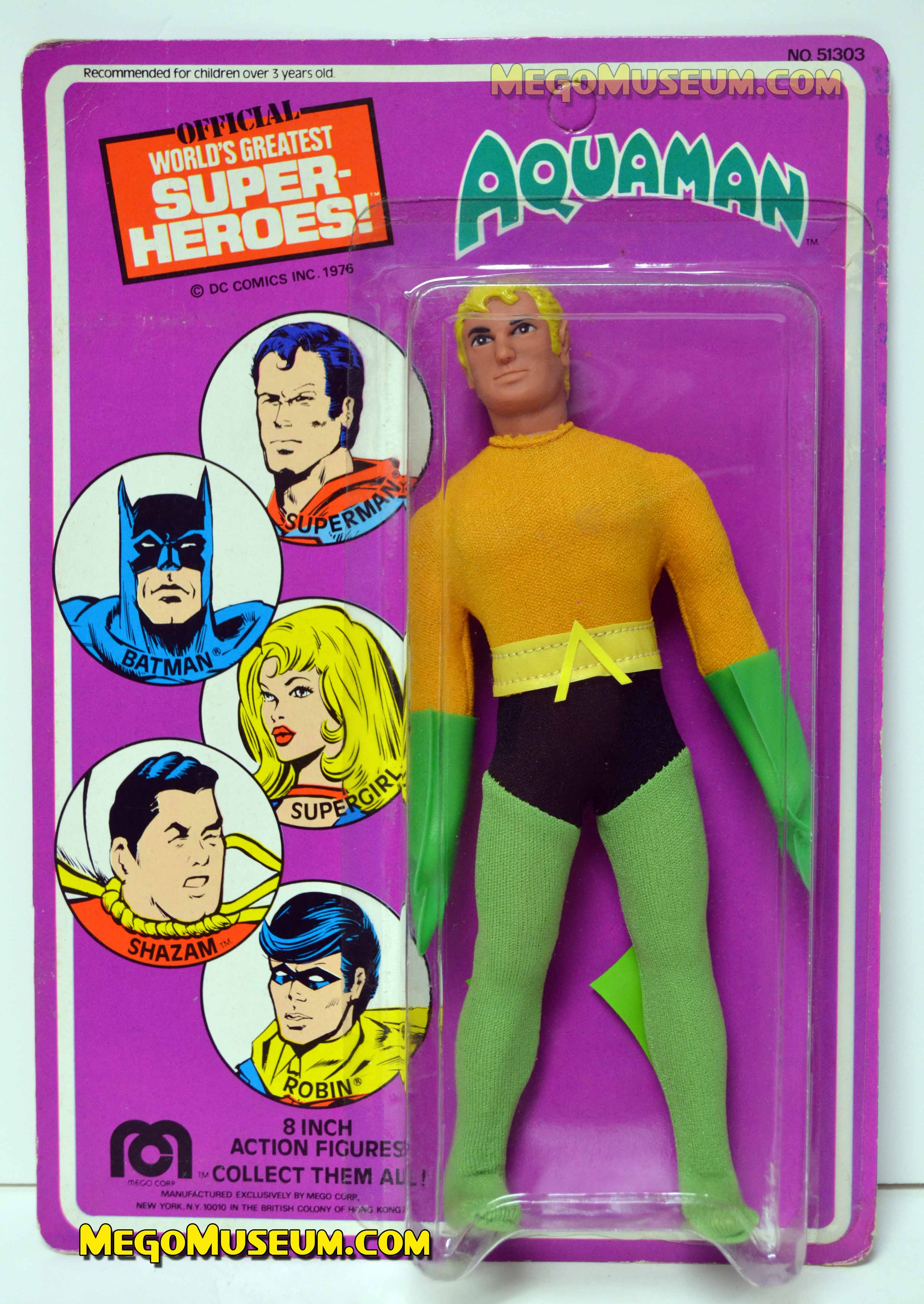 Above is a shot of Aquaman on one of his two known US cards, this is the 1976 version. A lot of speculation abounds as to whether or not a 1977 Aquaman card exists but there is no current photographic evidence, hopefully one makes itself known. 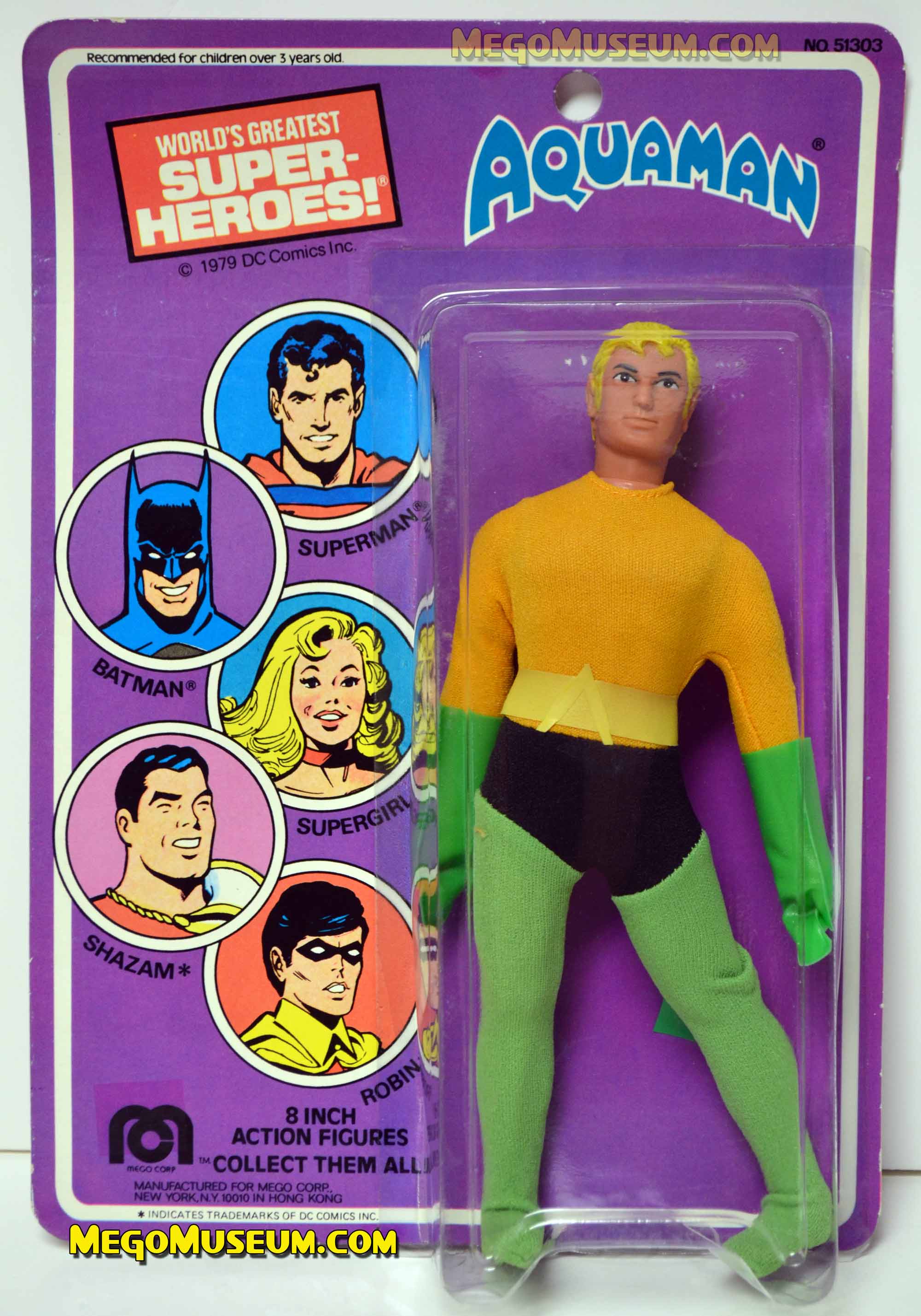 Above is the 1979 Version of Carded Aquaman, smiles everybody!

As they disposed of excess inventory and cancelled figures, Mego took left over Aquaman, Spiderman and sometimes Batman gloves, slapped them on a ’79 Superman card and Voila! The Ultra Weird Franken-Aquaman, sometimes found with glow hands! Courtesy of Scott. 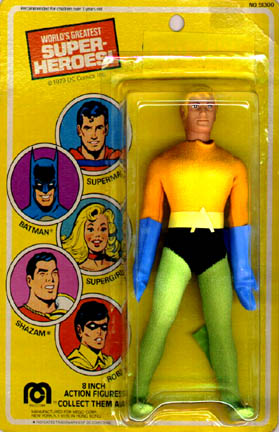 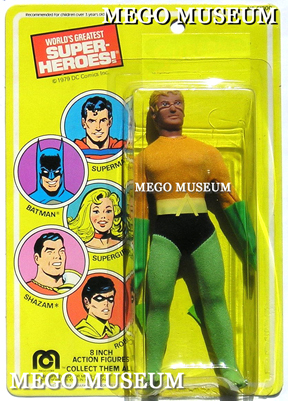 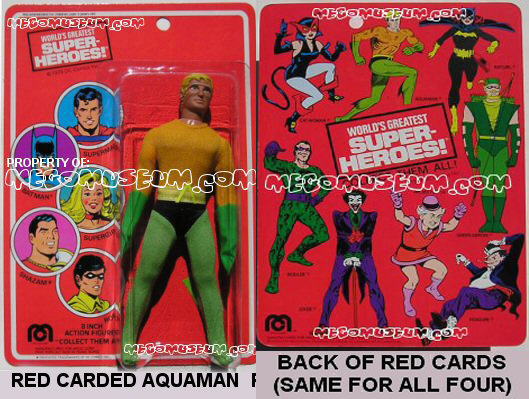 Another example of inventory clearance is the Red Card Aquaman. Red cards are believed to late releases and are quite desirable. Others in the red card series include  The Riddler,  Batgirl and  The Green Arrow.

From South of the Border comes one the rarest pieces out there, a mint box Ledy Aquaman. Very different from his American counterpart, this Ledy Aquaman may be the only boxed specimen known to exist. Kudos to Mexican Super Collector Luis for these great pictures!

Some folks disrespect Aquaman, but how many heroes got their own playset? Take that Shazam! Click on the pic to go to the  Mego Great White Shark Page! 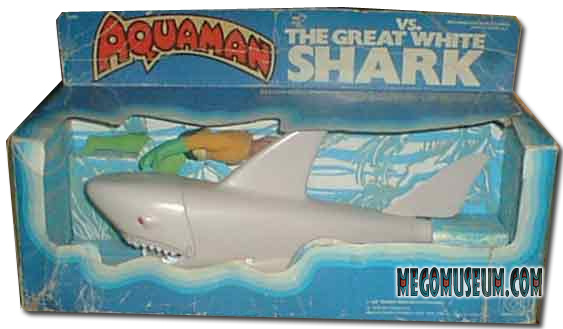 Both Doctor Mego and Classic TV Toys make gloves. DM gloves are matte finished and more similar in shape to originals. They are marked DM on the inside cuff. CTVT’s are very glossy, have less of a curve between the cuff and thumb, and have much less thumb room compared to the originals. CTVT’s are unmarked.

Original Mego emblems come in two styles, paper and vinyl. Vinyl came later and is almost welded onto the belt. Paper Aquaman emblems are basically stickers. There are no factory made repro’s available, although it is very common to see reproduction emblems on this figure. The reproduction emblem pictured is an example of how close a handmade Aquaman emblem can look to an orginal.