1983 would have seen a second wave of Eagle Force Heroes and Villains arise. The second wave was again using the characters race as a strong identifying feature (this has been done for many years in military comics such as Blackhawk and Sgt. Fury) The multiple names were done in case another toy company had secured the rights.Sadly, Mego shut it’s doors for good before the line could ever reach retail. Now for the first time ever, the Megomuseum gets to proudly publish the “lost wave” of Eagle Force with character description notes by Mr Paul Kirchner. 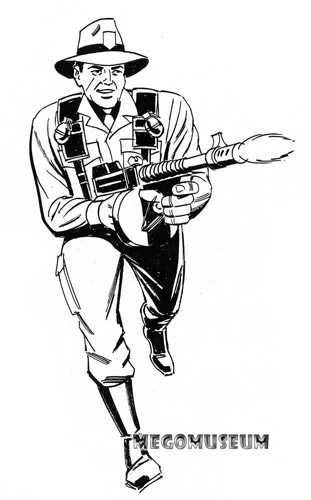 A nostalgic type who wears a thirties fedora and the obligitory balck shirt and white tie under his E.F blouse. He favours the Thompson M1928Al with the 50-rd drum. Talks about his “family” alot. 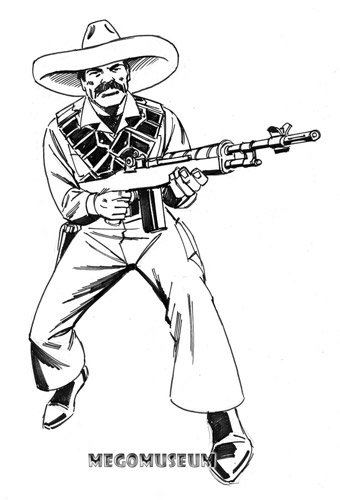 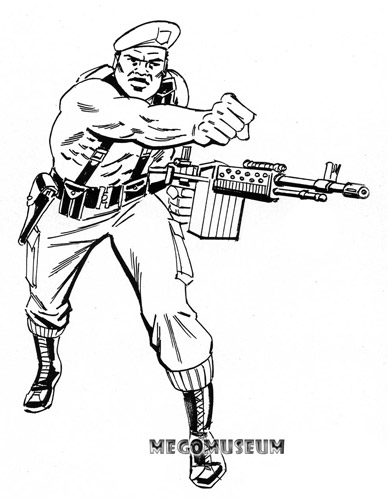 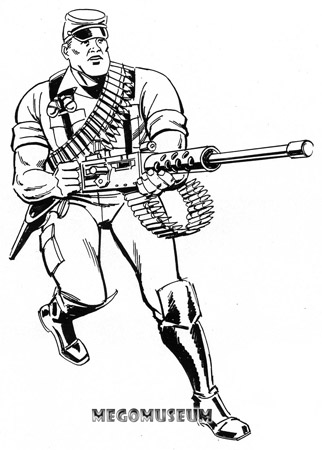 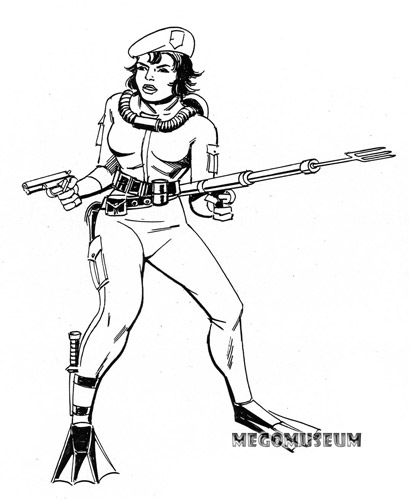 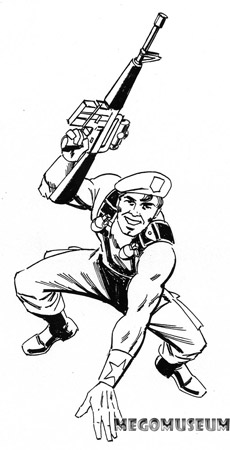 Italian, from a circus family. Can walk a tightrope, do trapeze work, and tumbling. wears a tight gold top. Carries and M-16 with scope. 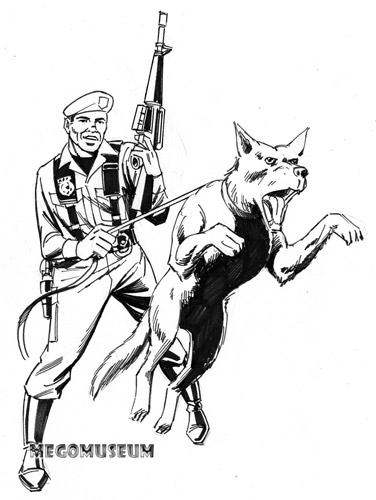 Kelly is an Irish Ex-Cop. His expertise is in the area of detective work. His equipment is cop style, with a .38 revolver, cuff case and a badge. He is the Eagle Force Dog Trainer. King is the Eagle Force’s k-9 Korps…he sniffs out explosives, drugs and does anything Rin Tin Tin can do.

One of the more interesting reasons for the Eagle Force characters being stereotypes was the fact that the toy had to make a quick impact on the child, the figure was too small to show a great deal of detail so it had to be the card art that sold the child on the character.Wave 2 seriosuly captilized on this with a colourful batch of heroes and villains. 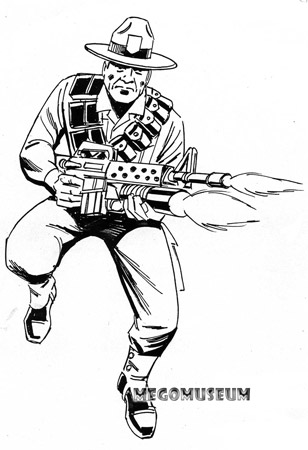 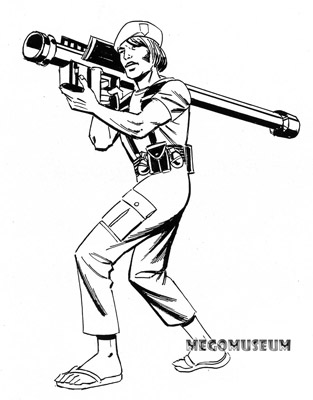 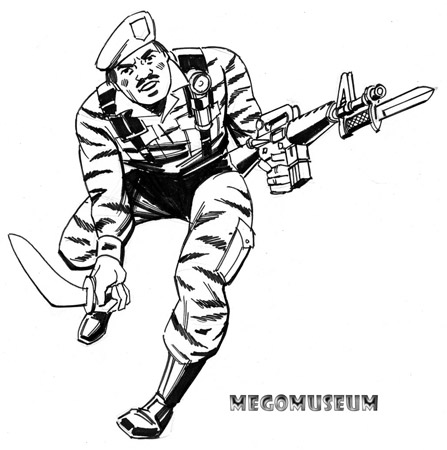 Expert Knife Fighter, like most Gurkhas. Carries Khurki fighting knife, and an M-16 with fixed bayonet. His gold fatigues have a black tiger-stripe pattern superimposed on them. 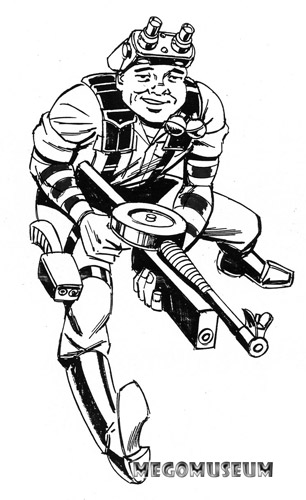 Eagle Force waeapons inventor and master of U.K.D’s (Unconventional Killing Devices). He’s a Madman in the “John Belushi” mold. He wears night vision goggles that pivot over his face like Fireballs visor. He carries the American 180 .22 caliber machine gun with 188-rd. drum and laser-lok sight under the barrel. He also carries the Taser non-lethal electric pistol. 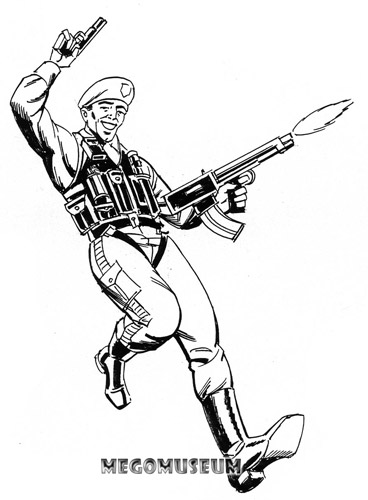 The New Eagle Force Recruits would have had their hands full with the R.I.O.T’s latest offering.R.I.OT would have proved in 1983 that they could be just as much an equal opportunity employer as Eagle Force, adding Russians, Mongols, Biker Chicks and even an honest to goodness Pirate to the ranks. Why couldn’t Mego have folded in 1984? 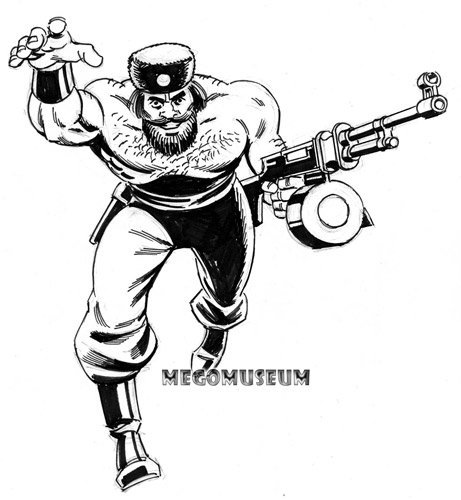 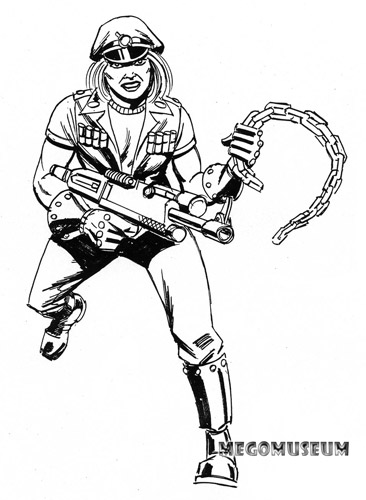 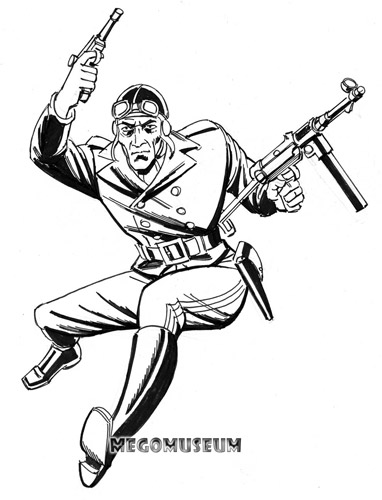 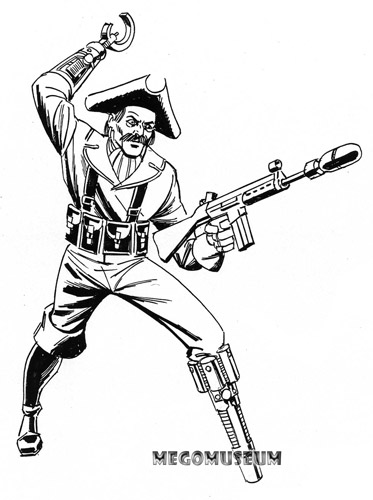 Modern day Pirate with bionic peg leg and hook, both of which house weapons. Dresses in the classic style but carries a German Heckler & Kooh G-3 assault rifle with rifle grenade. 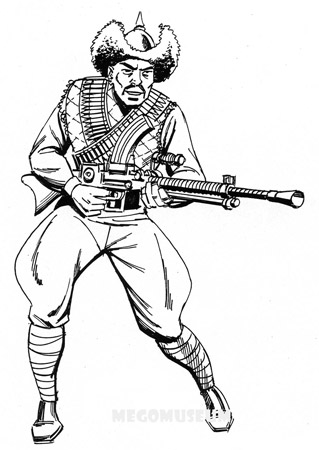 Warlord of the golden triangle. Maintains his own private army of R.I.O.T troops in S.E. Asia. Carries a Japanese WW2 type 99 Machine Gun.

“Nitro”(Mentioned in notes but not shown)

The Mad Bomber. Is swathed in sticks of dynamite, you don’t want to be near this guy.