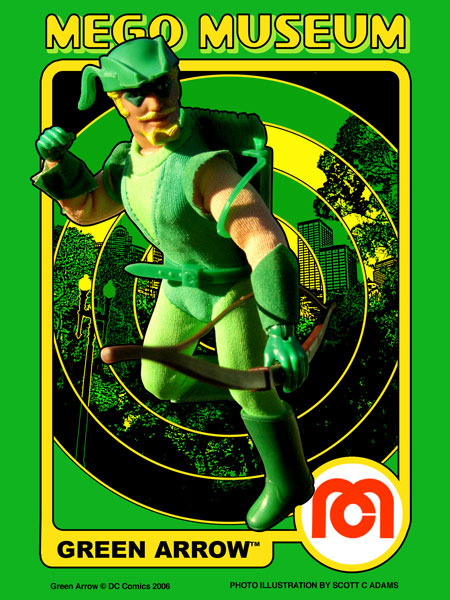 It is a consensus within Mego collecting circles that Green Arrow is the finest WGSH figure ever produced. The attention to detail
really highlights a company on top of their game production wise. Arrow was introduced in the 1975 wave of characters, all of which were superior design wise, he is the only DC character to surface that year and was the last 8″ DC hero produced (The  Teen Titans were 6″ folks) Ollie seems like a somewhat logical choice for Mego, he had recently made a guest shot on the Superfriends and was a regular in the Justice League books at the time. Mego even made his sidekick  Speedy in 1976. 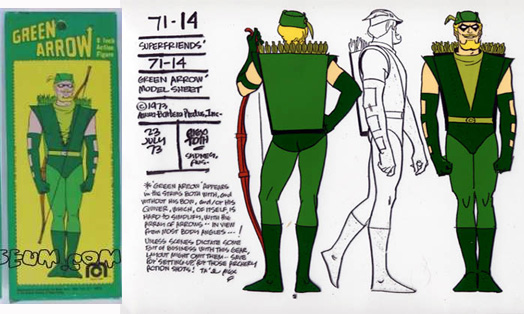 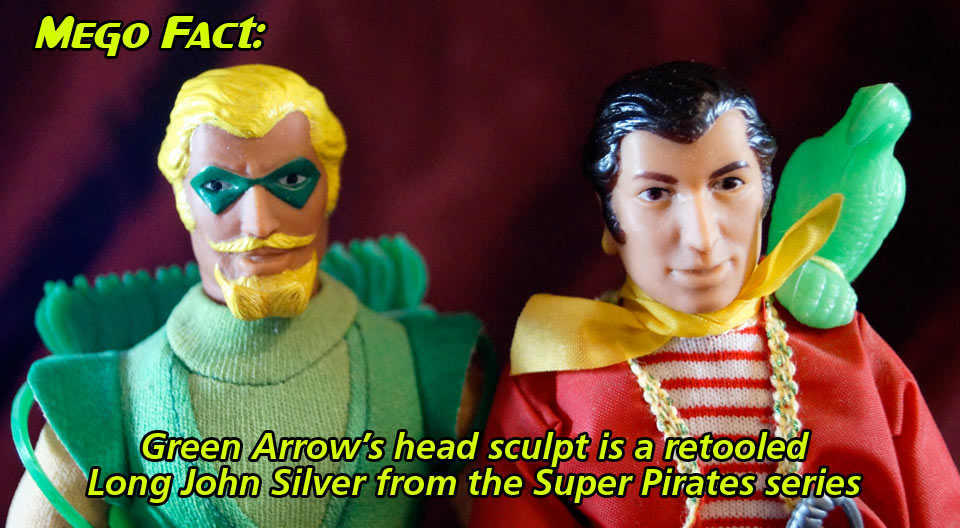 Mego Green Arrow used Long John Silver as a base. 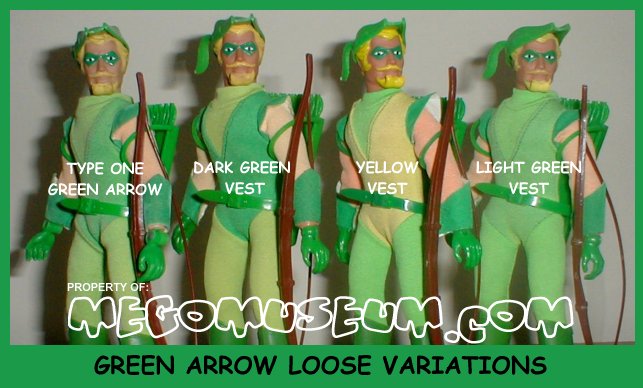 This chart produced by Tom shows the many variations of Mego Green Arrow, the figure was released on both body styles although GA is more commonly found on a type 2 body. 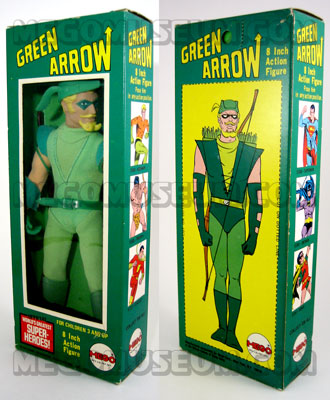 The Green Arrow window box is the most commonly found packaging, it also one of the most pleasing. The artwork on the back is a copy of an Alex Toth character sheet for the Superfriends. (above)

Learn all about the Comic Book Origins of Mego Art in the MegoLibrary. 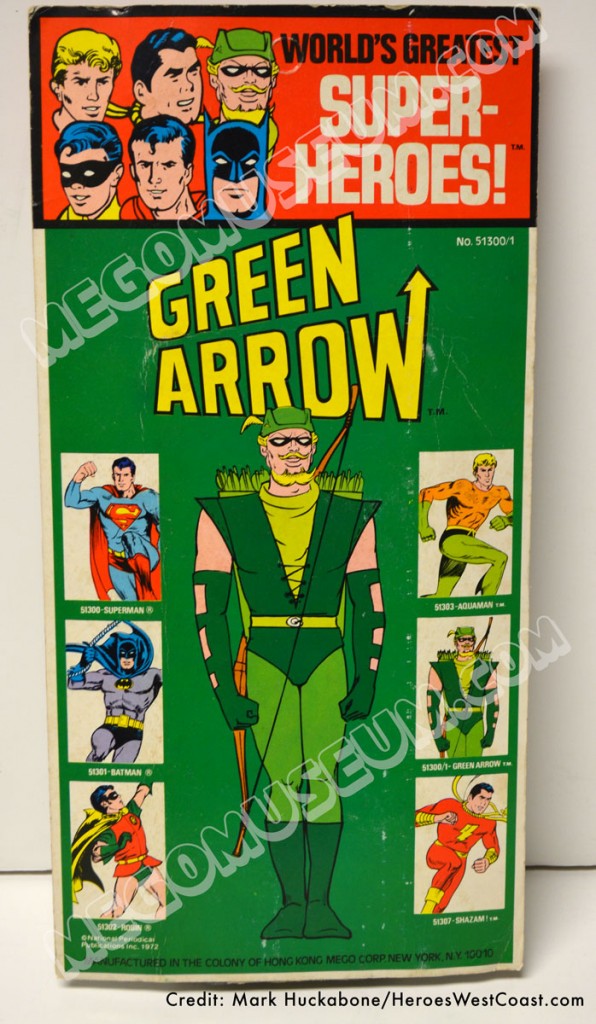 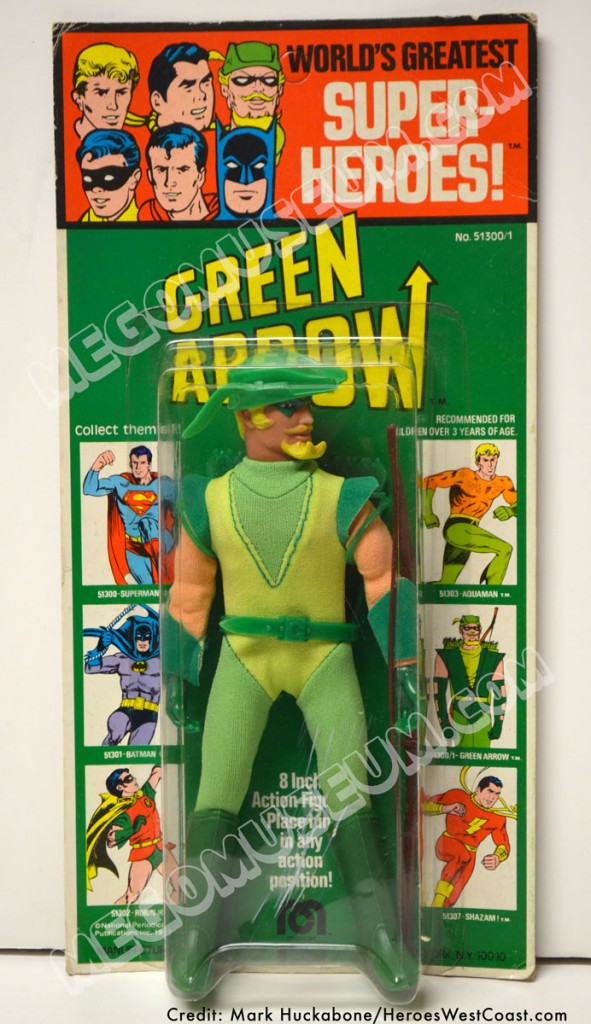 The Green Arrow’s arrival circa 1975 signifies a change in the Kresge Header for DC Characters, this is one of the toughest Kresge cards to find. It also suggests that Green Arrow was released in late 1974 as none of the other figures from the 1975 wave (such as  Falcon) were released on Kresge cards. 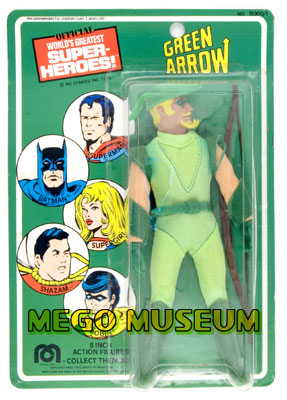 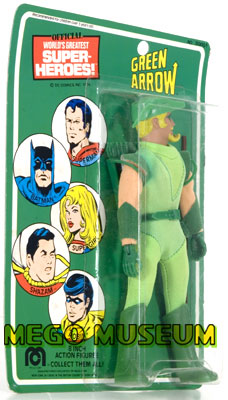 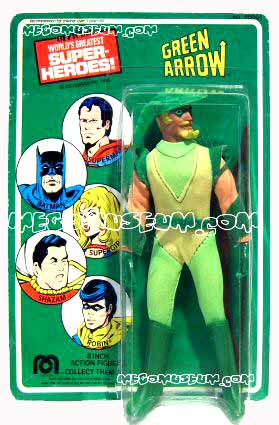 Green Arrow on his US Card is a very difficult item to find, let alone a yellow  vested version as on display here (Thanks go to Tom for this great photo). 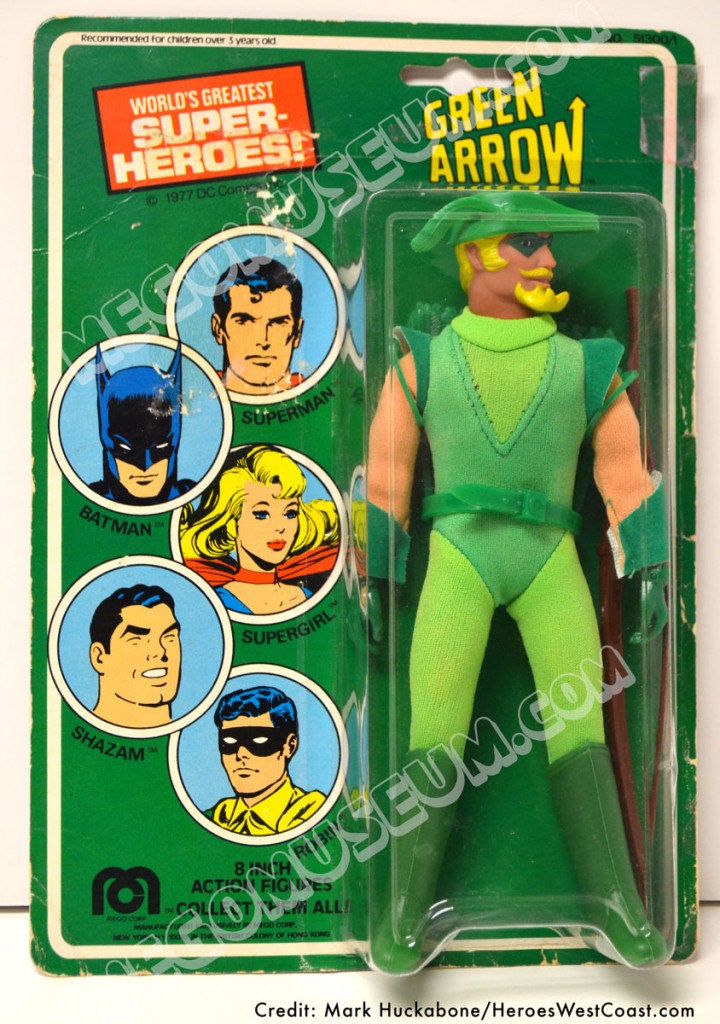 Above are 1977 “A” carded versions of the Green Arrow, the most notable feature of these figures is the butterfly punch and the thinner plastic bubble. 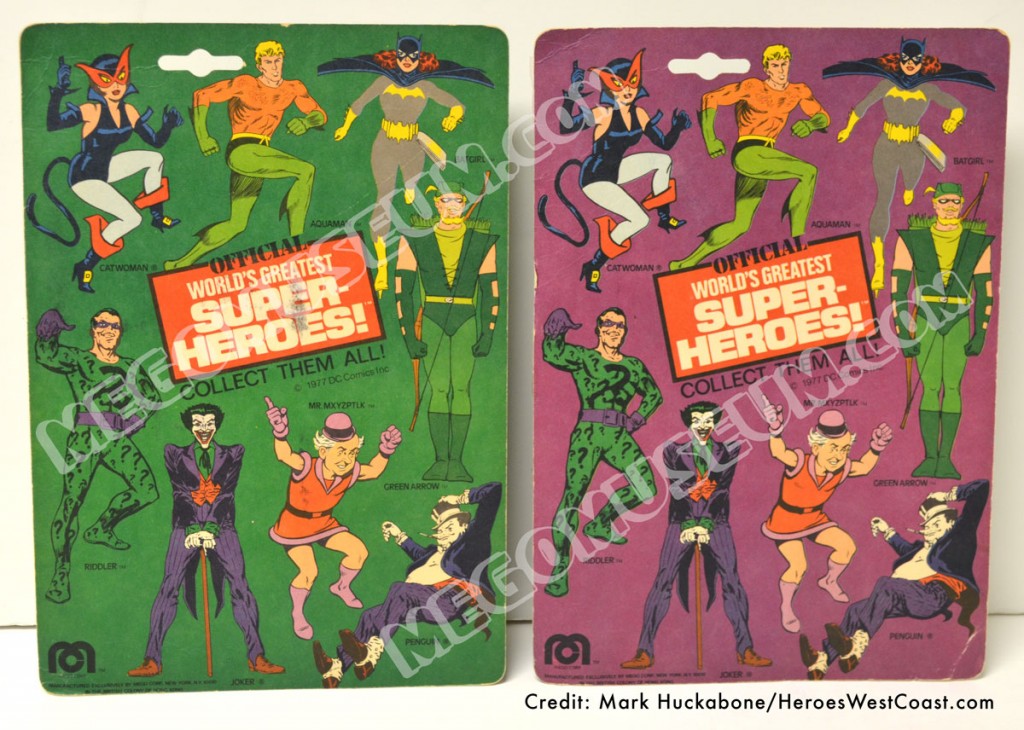 While both backers are non glossy on these versions, what’s unique about the card on the left is it’s purple backer, proving to many that there was an Aquaman in this A card series as well.. 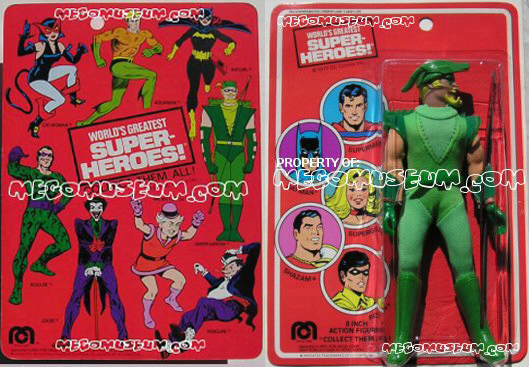 Red Card Green Arrow shown above. Red cards are believed to be Mego’s attempt to close out figures in the late seventies after
they were cut from assortments. Other known red carded figures are Riddler, Batgirl and Aquaman. 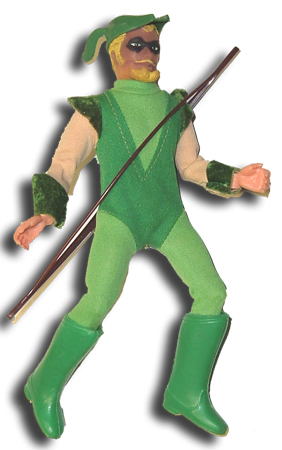 Here is Lili Ledy Green Arrow (AKA Fleche Verde) in all of his glory, a boxed example has not surfaced but Ollie came in Fist Fighting (Yeah that’s right, a fist fighting Green Arrow!) and a non fist fighting version. He is one of the top four hardest to get Lili
Ledy Megos. Photo courtesy of  Foreign Mego Archive.

Mego gave Green Arrow a set of wheels as well, click on the image to check out the Mego Green Arrow Car! 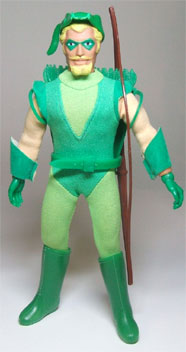 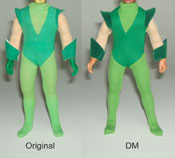 Green Arrow’s suit has been factory reproduced by Doctor Mego. The colors are a little different on the repro, but it’s difficult to state the differences since original Green Arrow suits, probably due to fading, vary in color. The cuff and shoulder piece material on the repro is darker green, and green on both sides, where as the original is white on the back side. The other big difference is the collar area. The reproduction is rounded all the way around the collar and the original comes to a point in the front.

Both DM and CTVT have made boots. DM’s are a thicker plastic, more round around the edges and stamped DM on the bottom. CTVT’s are closer in thickness but are also slightly different in shape. They are unmarked.

Green Arrow’s Quiver is unique to the character and has been factory reproduced by Doc Mego. The reproduction is very accurate with a slight difference in plastic material used. The repro is marked DM on the back.

Green Arrow’s green hat is unique to the character, although the style was also used for Speedy. It has been factory reproduced by Doc Mego. The reproduction is very accurate with a slight difference in plastic material used. The repro is marked DM on the inside. 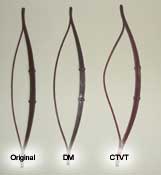 Green Arrow has the same bow as Speedy and a couple characters from the Robin Hood line and has been very accurately factory reproduced by both Doc Mego and Classic TV Toys. Doc’s version is very close in appearance but is a touch darker in color. It is marked DM on the side by the handle. CTVT’s version is lighter in color and marked CTV by the handle.