There were several Monster lines in production in the Seventies, and Mego’s popular collection is featured here. Monsters came in Solid and window boxes, as well as Kresge cards. They were re-released in 1980 under the Lion Rock name. The eyes and well-sculpted hands GLOW IN THE DARK!
Check out our history of the Mego Mad Monsters Line. 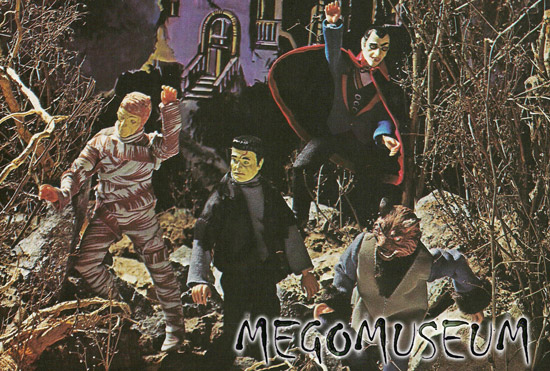 Above is a rare shot of the Mego Mad Monsters Prototypes from the Baravelli Catalog. Note that the figures don’t yet have their glow in the dark hands and Frankensteins “flat top” suggests that the blue haired version was infact a coverup to an early error. 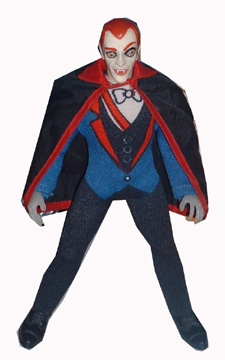 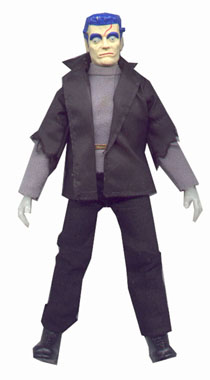 Here’s two weird variations, Red Haired Drac and Blue Haired Frankie! Both are very rare.Drac courtesy of Vince. Their origins stymie most collectors, the best theory heard thus far is that the first figures resembled the Universal make up too closely (ie Frankenstein’s flat top) So Mego quickly added an odd paint combination until the head sculpts could be altered. When asked about this Mego VP Neal Kublan stated that Mego wouldn’t have knowingly produced a flat top for Frankenstein, which lends credibility to the notion this was a quickly corrected factory error. 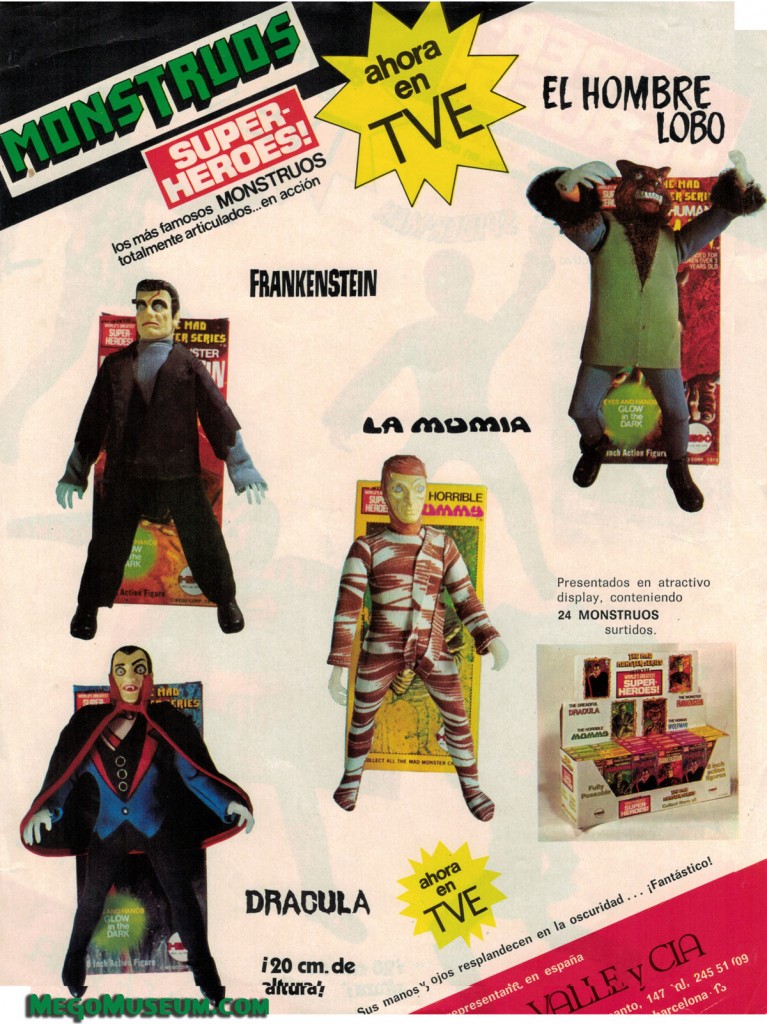 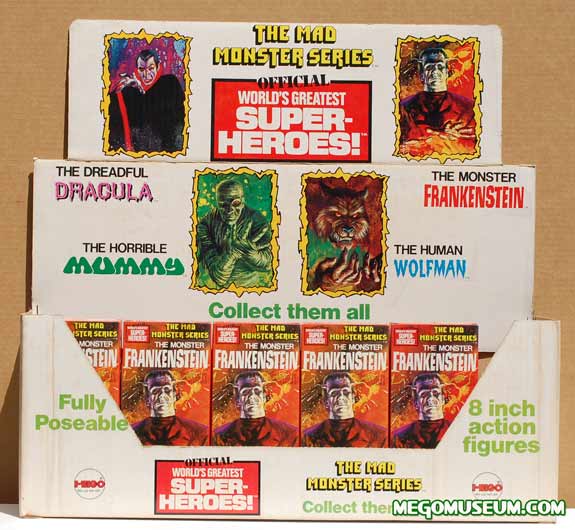 A sweet original Mad Monsters display box complete with boxed Frankensteins, from the personal collection of Mark Huckabone. Click on the image for a larger view.

Thanks to Stefano, the Museum now has images of this extremely rare Mad Monsters header card. This was used in the Mego Display boxes when the line first launched 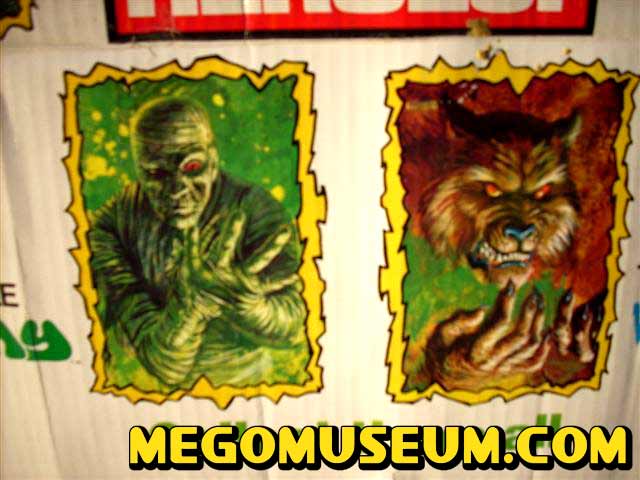 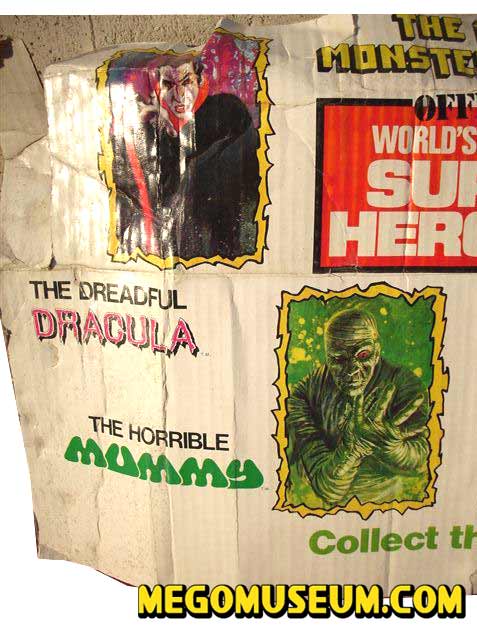 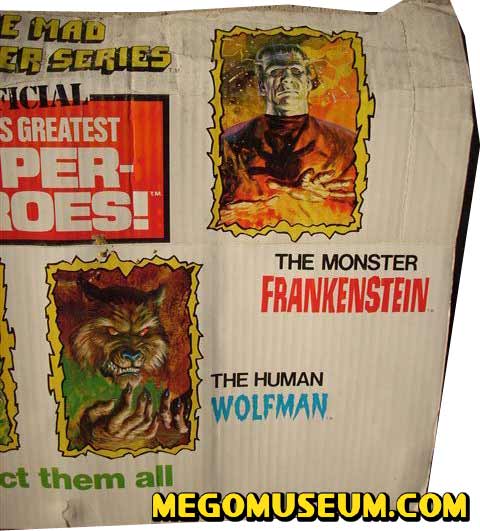 These display boxed housed Solid Boxed Mego Mad Monsters (see below for images) Thanks again to Stefano for this amazing glimpse of one of the rarest pieces of Mego history. 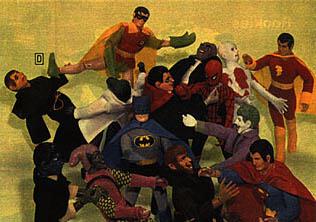 This is one of my favorite Mego pictures of all time. Courtesy Brian Heiler. it is from a Montgomery Ward’s Xmas Catalog and features the WGSH slugging it out with the line of Monsters from Lincoln. They made more Monsters, but the quality just isn’t there. How could it be? They weren’t Mego… For more information on Lincoln and AHI Monsters, click the link at the bottom of the page.

The artwork on the Monster boxes is among Mego’s finest. Look for more examples as soon as they come. 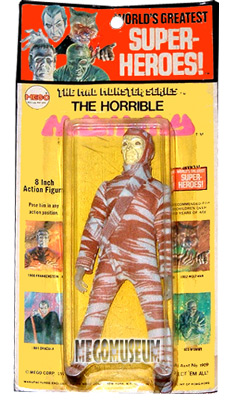 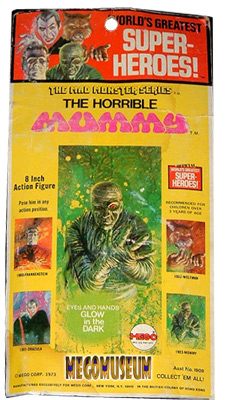 Kresge
Carded Monsters (such as the Mummy shown above) are extremely hard
to find, very few complete sets exist making them very desirable. 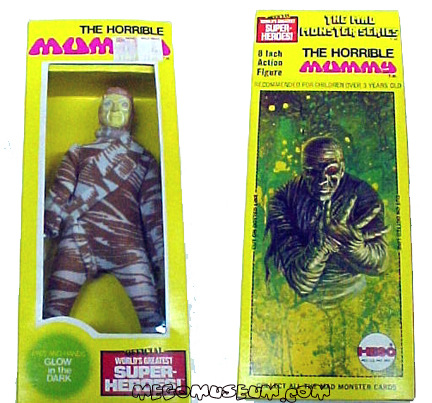 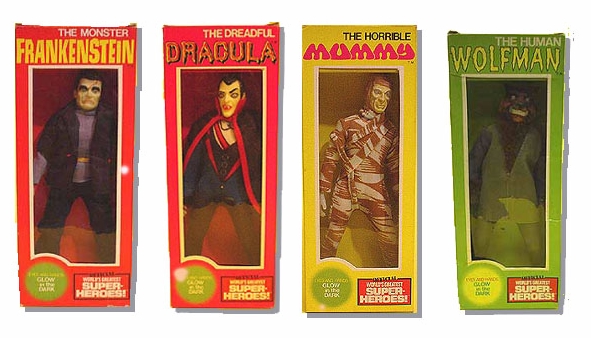 Monster
Window Boxes are also extremely hard to find, what you are looking
at is one of the very few complete sets. 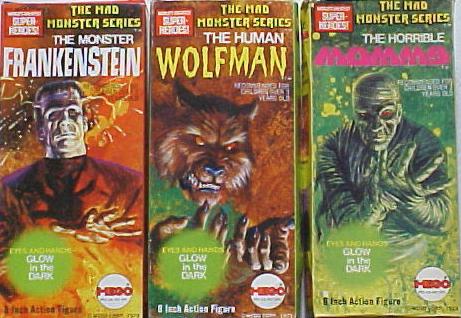 The original Monster line was available on both the Mego type1 and type2 bodies. Mego also released these figures under their Lion Rock name with some differences in bodies and accessories.

Special thanks to MegoMuseum Member Werewolf for a wealth of Mego Monster information and for filling in some photographic gaps in the section.

The first version of the Mego male body was a metal rivet, less muscled body strung together with elastic. The Monsters are most commonly found on this body. This line features unique glow in the dark hands. Three of the four characters have the same thin fingered clawed hands, the only difference is the Wolfman who has hair sculpted into his hands. This body has not been factory reproduced.

Mego Mad Monsters are available on the type 2 bodies, but they are less common. This second version of the male body was more buff and had plastic joints instead of metal rivets, and strung together with hooks and rubber. Like the type 1 this line features unique glow in the dark hands. Three of the four characters have the same thin fingered clawed hands, the only difference is the Wolfman who has hair sculpted into his hands. Mego also released the Monsters under the Lion Rock banner. The Lion Rock type 2 has the glow hands, but all four monsters have the same hands and they are made from the same molds as the standard Mego type 2 instead of with the monster hands used on the Mego release. The type 2 body with monster hands has been reproduced by Classic TV Toys. CTVT’s bodies (marked Figures, Inc. on the back) tend to run a touch shorter, are more fragile, and have a slightly different design. A telltale sign of the CTVT body are the legs that tend to snap together at the knees. Doc Mego doesn’t make the monster hand body but he does make the standard type 2. DM’s (marked 7th Street Toys on the back) is very accurate in detail and appearance but with a heavier feel and more rubbery hands.