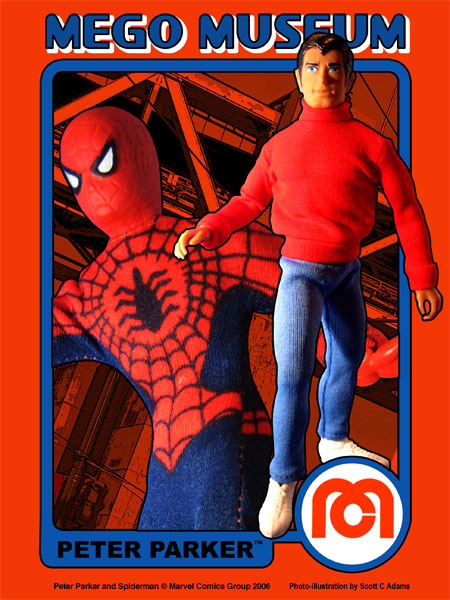 Peter "I like Wheatcakes" Parker is the only Marvel figure to
grace the Secret IDs and the most logical choice. Peter wears an
outfit that bears the same pattern as the AJ Secret Agent outfit
but in his traditional red and blue.

Design wise, Peter is a Shazam with slightly rearranged features
and blue eyes. Some say this figure came with a camera but it has
never been verified. 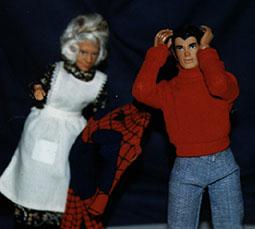 MEGOMUSEUM CLASSIC SHOTS: The first Peter Parker picture
we had was Brian Heiler’s imaginative tableau, Grandma Walton
as Aunt May Getting Peter Dressed to Go Out and Play. 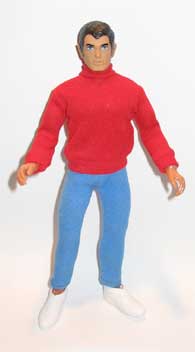 Doc Mego makes a Peter Parker head, which is a character who shares a sculpt with Shazam. The biggest difference is the overall shape of the head. DM’s is more narrow at the chin than an original and made of a firmer material. The eyes are painted blue like the Parker version. It is marked DM on the back of the neck. The original Parker head has a little different paint job around the hair and the eyes are blue. The original Parker head has no markings on the back of the neck. The original Shazam head is stamped with the DC NPP copyright info on the back of the neck. It should be noted that there is some indication that the AE/SI heads have a somewhat unique color compared to the standard WGSH. Less red in the mix, making them more “mocha coffee” in color. This can’t be proven 100% due to the rarity of the figures and the way they were packaged and sold, but it seems to be true in most cases. The best indicator for Peter Parker is still the altered paint, but for characters like Bruce Wayne, Dick Grayson and Clark Kent, this color shift is a good indicator.

Peter’s shirt has been factory reproduced by Doc Mego. The repro is shorter, tighter and doesn’t have the cuffs the original has. It is a slicker material and is marked DM on the inside back near the seam.

A unique item to the character and not factory reproduced. 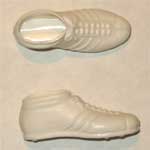 Peter’s shoes are actually cleats and the same shoes found in the Action Jackson baseball and football sets on Dinah-Mite’s friend Don. However it should be noted that the AJ sets will have small pinholes in them as a result of being attached to the packaging. They have not been factory reproduced.