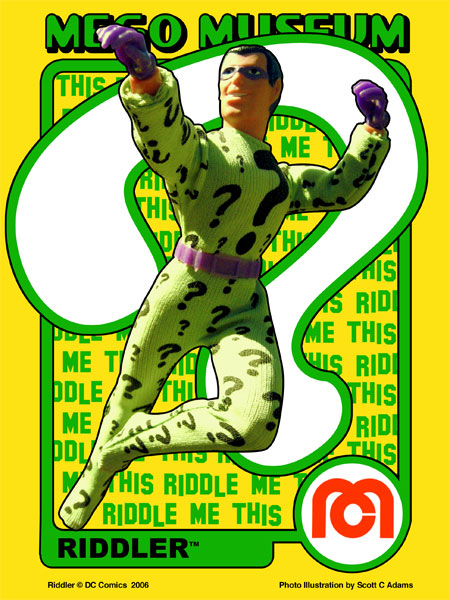 Riddler first appeared in the 1974 Superfoes wave of figures which comprised of 3/4 Bat Villains. The character was something of a bit player in the comics until Frank Gorshin’s maniacal performance on the 60’s TV show elevated the Riddler’s profile.

Mego captured the Riddler perfectly, because his gloves didn’t have gauntlets Mego used painted hands instead of oven mitts (all
the Superfoes got colored hands actually) and his belt is a more purple Batman utility belt.

The Riddler head sculpt captures the characters look perfectly, next to the Joker he may be the best of the Superfoes. Riddler remained in the WGSH until 1979 when he was dropped from the assortment, the figure was available on both type 1 and type 2 bodies. 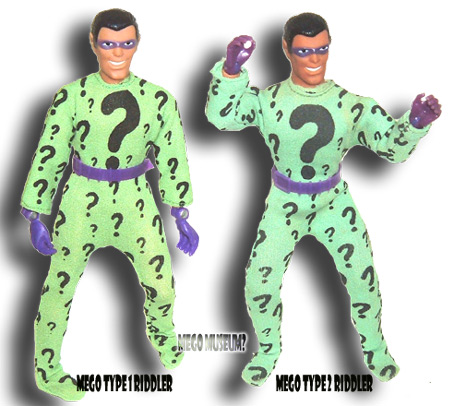 Mego Type one and Type 2 Riddler. The type one figure tends to have an issue with the suit bagging up at the bottom. 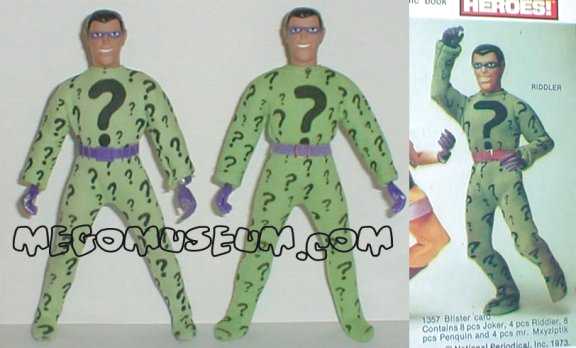 Some of the variations known for Riddler’s belt (courtesy of Tom). Examples of Riddler with a purple elastic belt (as seen
in the 1974 catalog) are extremely rare. 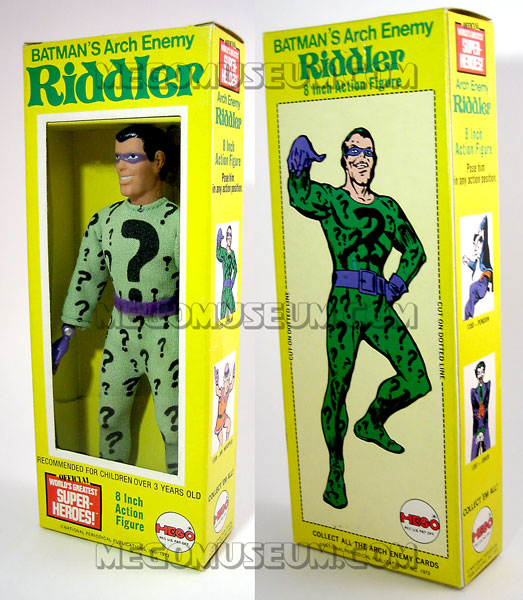 Window Boxed Riddler is the easiest form of packaging to find, even then it can go for a good buck. Riddler was a bit of a short
pack in the selection. Both type 1 and type 2 Riddlers come in window boxes. Collection of Scott C Adams. 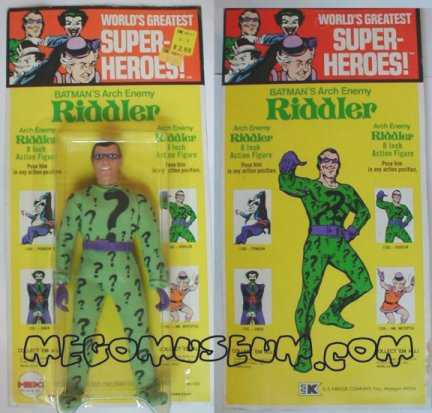 Riddler is the most difficult to find villain on a Kresge Card. (Photo
courtesy of Tom) 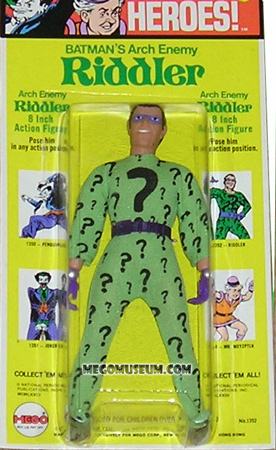 This a 1st version Kresge cards for the Villains (Note square edge bubbles versus the rounded edge bubbles the later Kresge
versions and regular carded superheroes came on). They also have extra text between their feet which the is not seen with the
2nd version Kresge villains. (lesson and pics courtesy Raj) 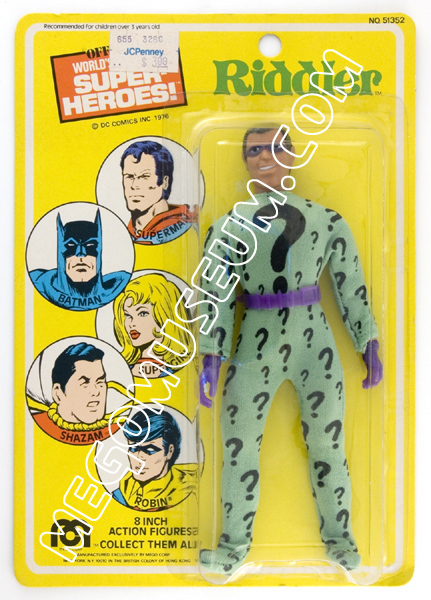 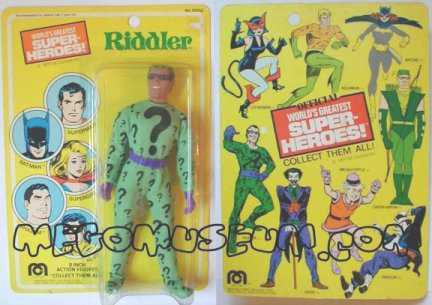 US carded Riddler is even more difficult to find than his Kresge counterpart. (photo courtesy of Tom) 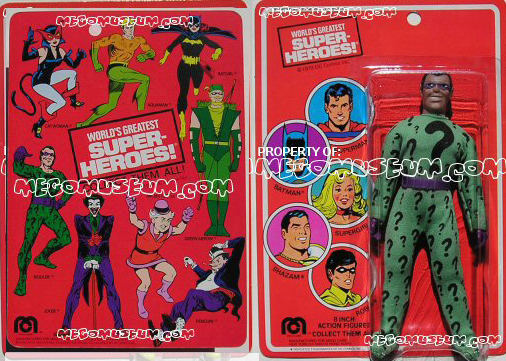 Red Card Mego Riddler shown above, red cards seem to be a way of getting rid of excess inventory of certain characters. It makes sense that the characters found on red cards such as Aquaman and Green Arrow were also removed from the WGSH in 1979. 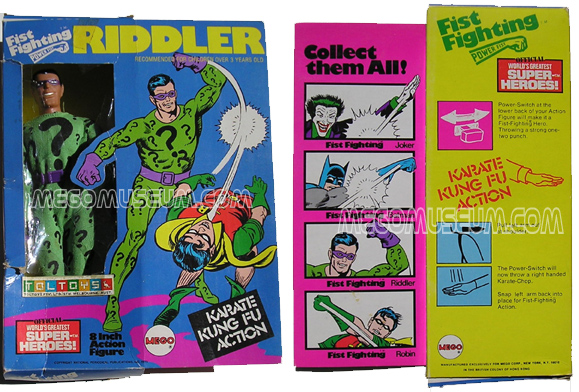 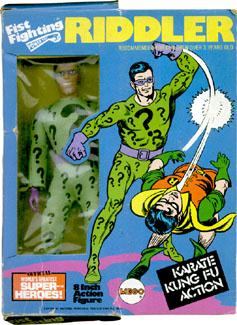 This Boxed Fist Fighting Riddler provided by IMP The Fist Fighters was a brief attempt to add a gimmick to the WGSH line, it received more fanfare in foreign markets. This particular Riddler used to belong to Glen Danzig, of DANZIG fame! 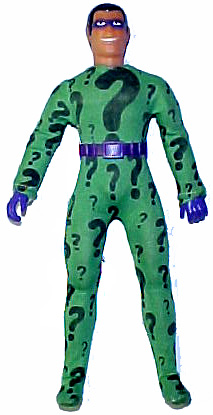 In Mexico, the Riddler is called Acerjito and Lili Ledy made this cool looking fist fighting version. Courtesy of Palitoy’s Foreign Mego Archive. 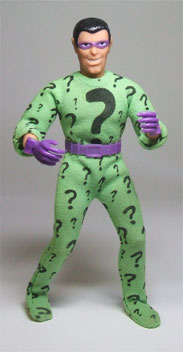 Riddler sports a purple version of the Batman belt. Doc Mego produced the only known factory made reproduction and it is very close to the original version, although the tips of the “points” are a little more rounded, and it’s a darker purple. It is stamped DM on the back of the buckle.

Riddler’s suit has been factory reproduced by Doctor Mego, and pretty accurately. The material is a bit slicker and the sleeves have an unhemmed look. It is unmarked.