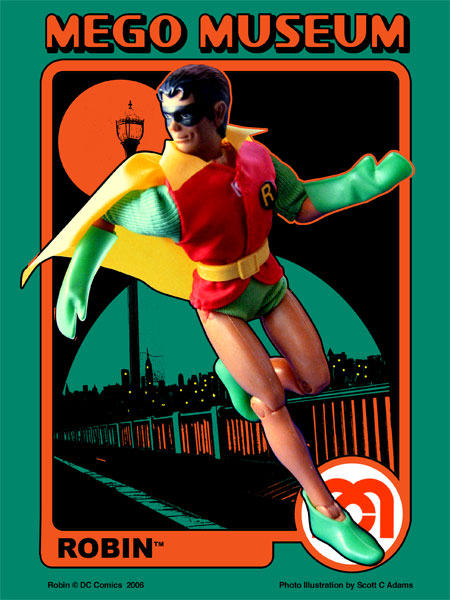 Batman’s teenage side kick shares the distinction of not only being part of the original four WGSH but to have never been cut from the WGSH lineup (unlike Aquaman.) Originally sold with a Removable mask (one of the most prized Mego rarities) his painted mask version was quickly introduced and is one of the most ubiquitous and beloved Mego WGSH figures. 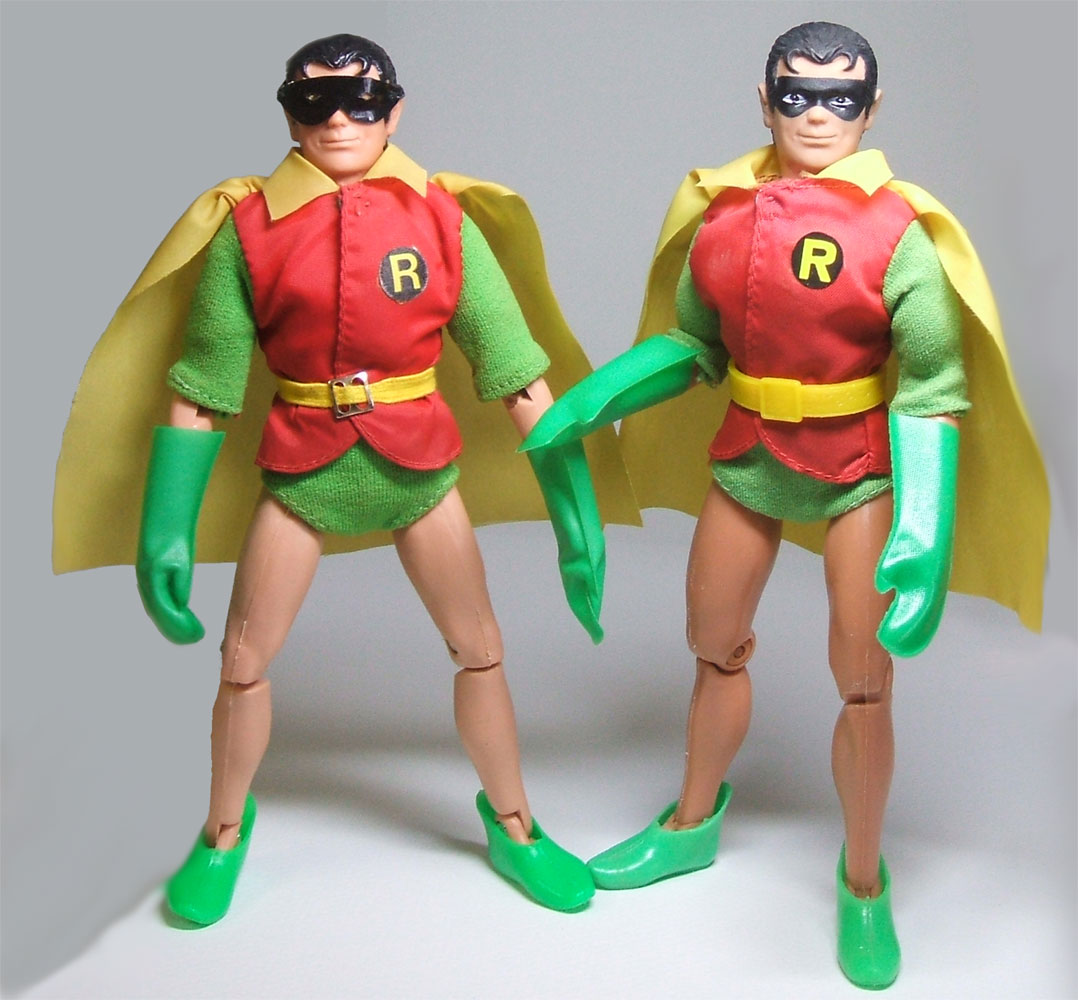 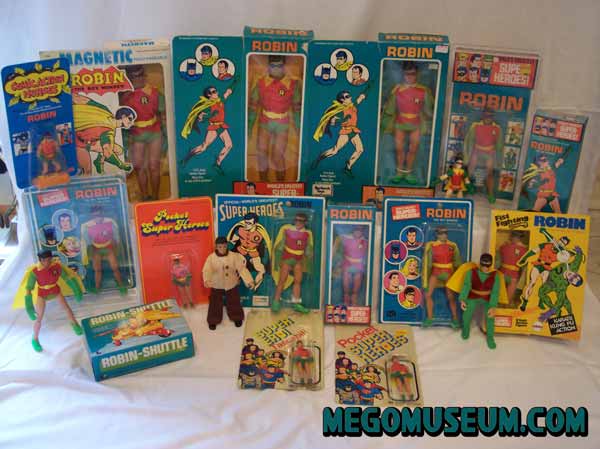 Just a few of the different items Mego produced for Robin, courtesy of the very generous Scott Arendsen. Scott sets Mego boy wonder items as high priority and it shows.

The Boy Wonder comes with green oven mitts, rubber booties, green briefs, and a head sculpt that harkens back to the sixties. Robin in the early seventies was more of a young adult but Mego went for the classic look, probably because the DC style guide artwork hadn’t been updated. Whatever the reason, Robin is one of the most beloved WGSH ever created.

In 1977, Mego released Robin’s team of crime fighting buddies, The Teen Titans but alas, he was
a head taller than them. 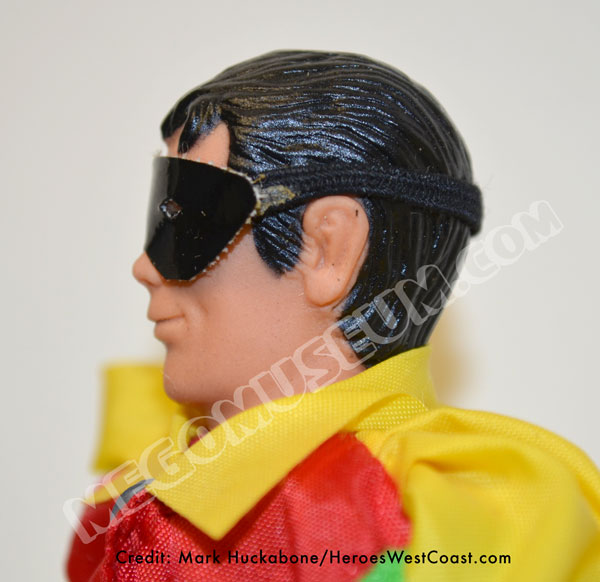 Observe the glue holding the elastic to the mask. 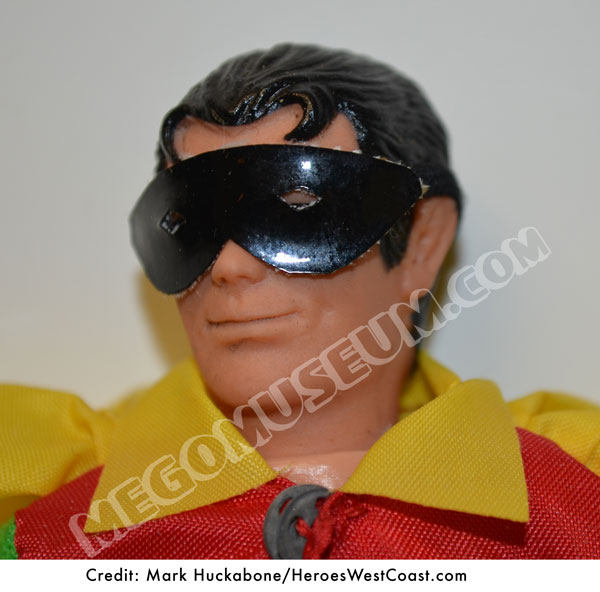 Note the shiny material on the mask and the strands from the inside backing fabric. 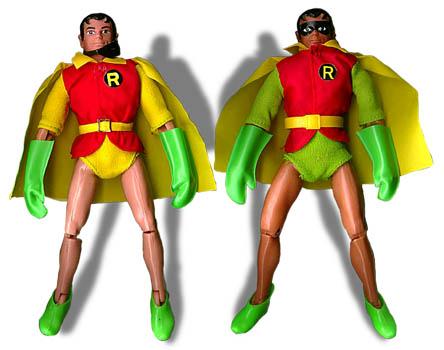 This side-by-side comparison illustrates the yellowing of the green material on Robin. In many cases it can be totally solid yellow, which led many of us to incorrectly believe it was created that way as a factory error. It was one of the oldest arguments in Mego collecting. 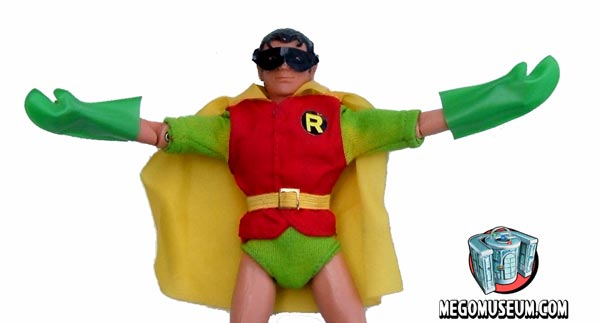 Here is another very good piece of evidence with respect to the “Green turning yellow” argument. Note the pit stains on this RM Robin; note the slow transition to yellow. Mego Forum member Heath credits this to heat and humidity. 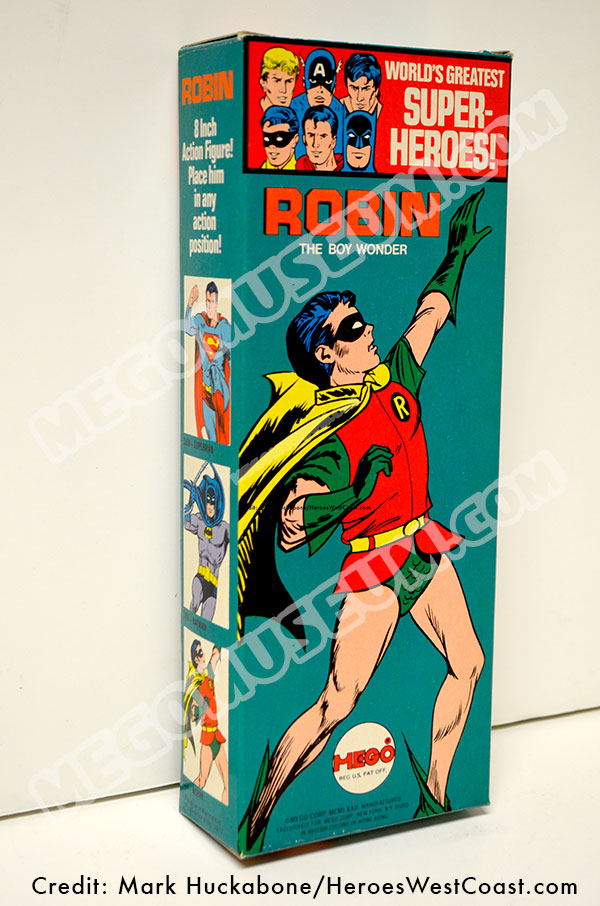 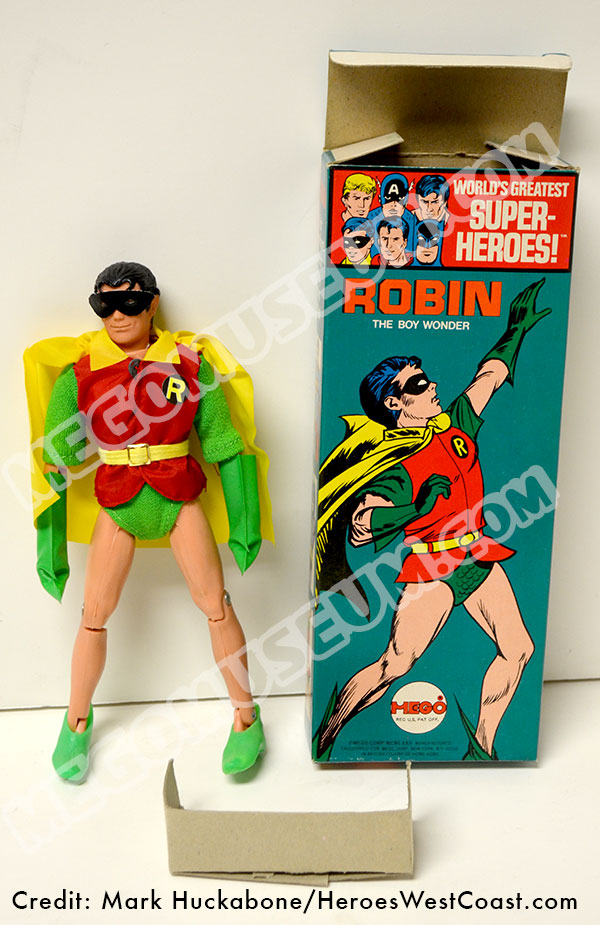 Solid boxes came with a cardboard insert for the header, these are often lost. 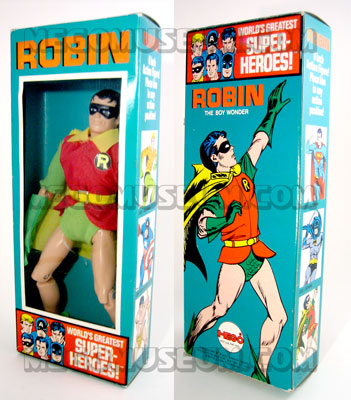 This Type-1 Robin box shows 3 panels on the side and Captain America in the masthead. The artwork for the
back of the box has been traced to an issue of Batman, for more information click on Mego Comic Book Origins. 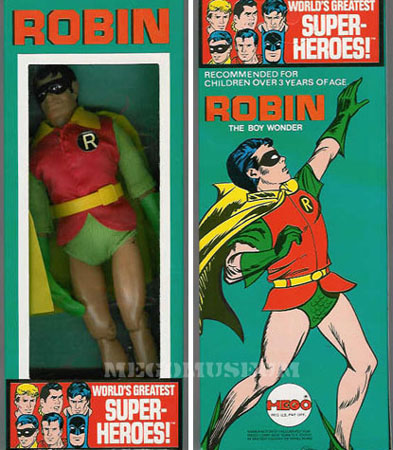 This is a later-issue Robin box as evidenced by theType 2 body and the presence of Shazam in the masthead. 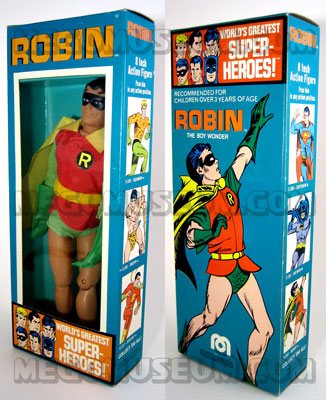 The interesting variant on this later-issue box is the presence of the TM logo below Robin’s name. 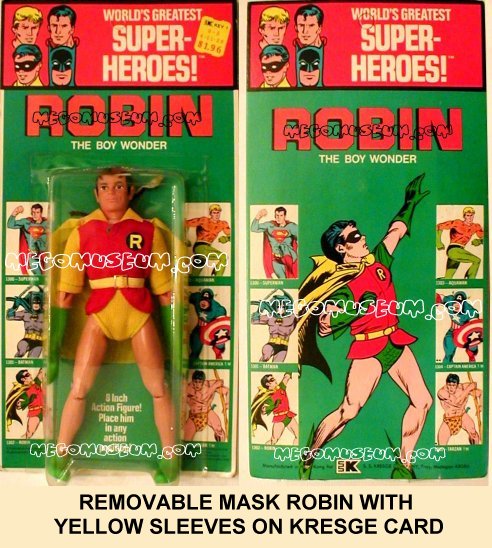 This is the first Robin available on a Kresge card, as evidenced by the header (featuring only the four original WGSH) and the presence of a removable Mask. It’s a shame but the masks often broke in the packaging, a fact that perhaps influenced the move to a painted mask. It seems that Robin made the move quicker than Batman. (Photo is courtesy of Tom) 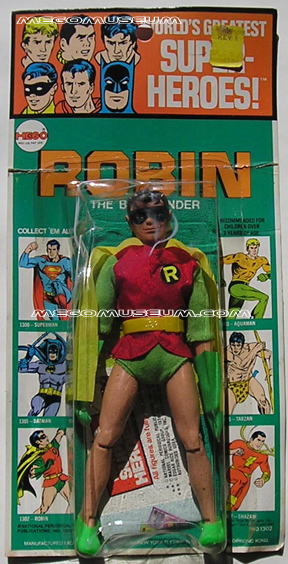 Another example of A Kresge card containing a catalog, which seemed to occur for a brief period. Note the header change and the
figure now has a painted mask. Another Kresge variant (featuring Captain America in the header) also exists. 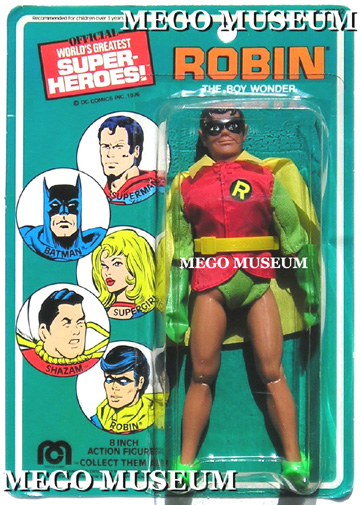 A nice example of the US 1976 edition and the US 1977 edition Robin card (Provided by Troy Maynus) Robin Cards. One of the nice things about the character being run for so long is the ability to find him on a nice US card for a decent price. 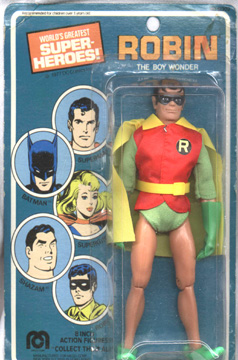 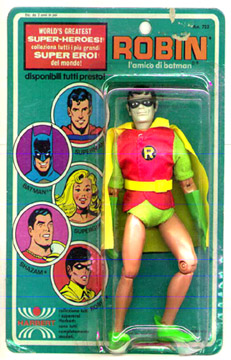 On the right is a Harbert (Italy) carded Robin, the artwork is
from the 1979 series. Note the graying head that is quite common. 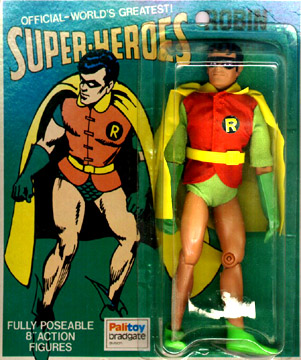 The Palitoy UK
Robin Card is one of the easier Palitoy cards to find. 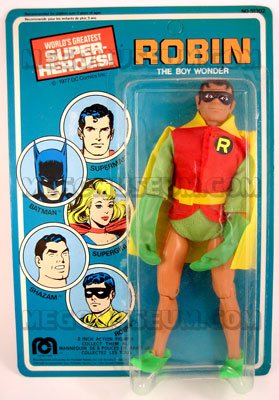 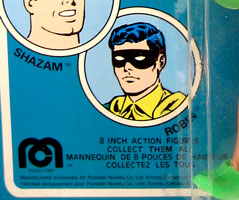 Here is a Canadian carded Parkdale Novelty Robin. The big difference in this card is the bilingual (English and French) nature of the packaging. Parkdale was the first to release Robin in Canada but Grand Toys followed up with their own packaging in 1979 when they gained they became the sole distributor for Mego in Canada. This version of Robin card turns up frequently and often in very good condition because a number of warehoused cards made their way into the secondary market in the 1980’s. Collection of Scott C Adams. 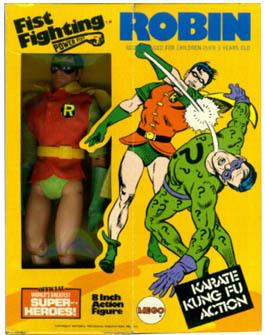 Take that Riddler! Robin was featured in the US and UK releases of the Mego Fist Fighters line. 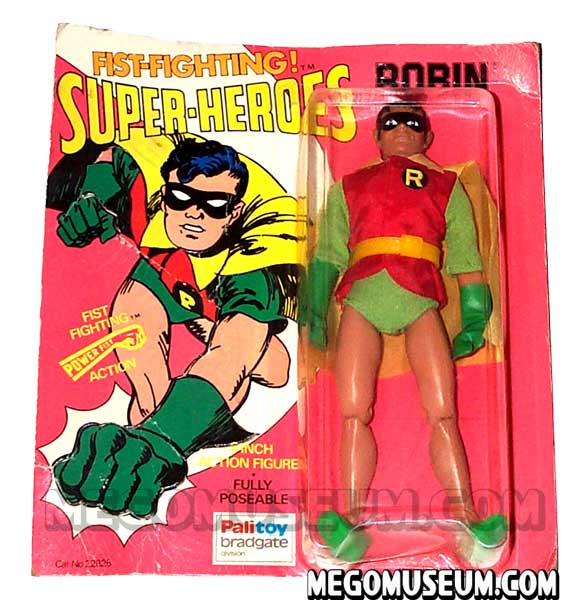 Robin is by far the most difficult of the Palitoy fist fighters to find mint on card. This carded example is courtesy of Gary MacGuire.

Below is the very hard to find Australian version of the Fist Fighter’s package. Just the US version with a lovely “Toltoys” sticker attached, thanks to our good friend The Toltoys Kid (follow them on Instragram!) 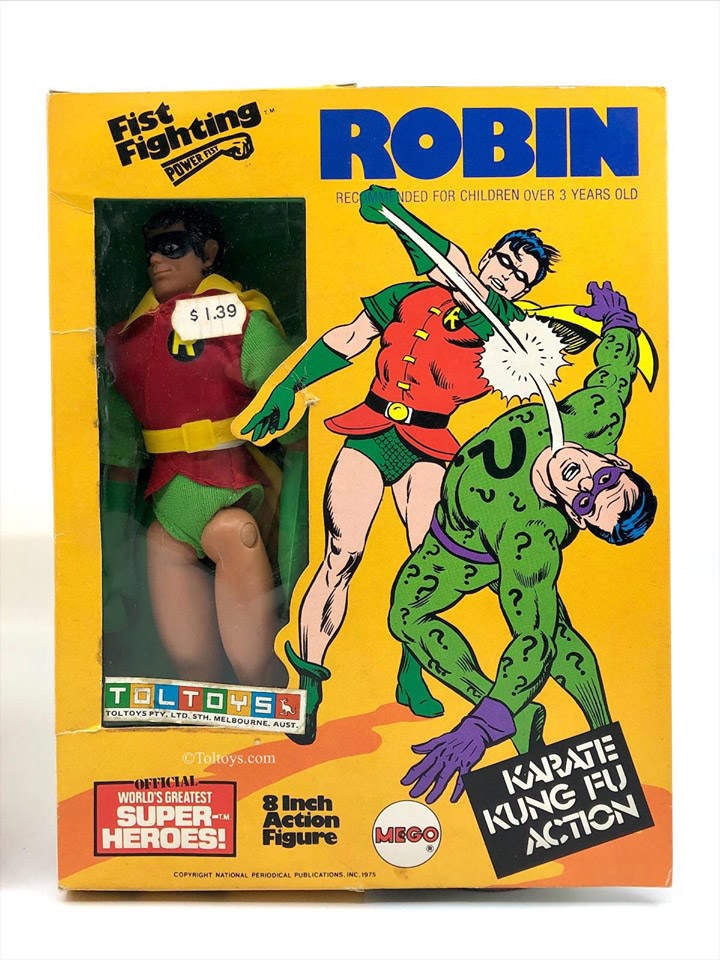 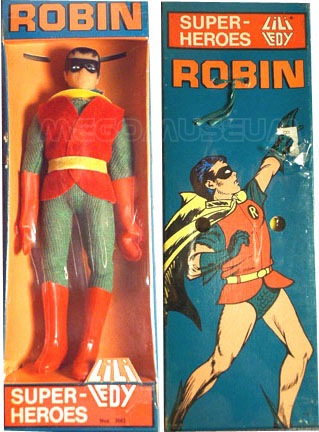 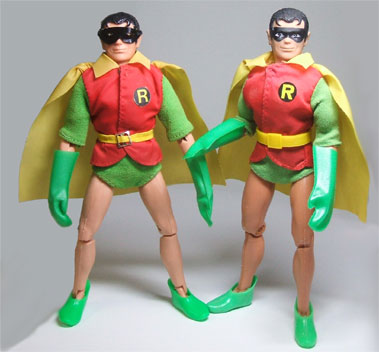 There are a variety of original Robin tunics. The common version has green arms, which come in a couple different shades of green. There is also thought to be a yellow shorts/sleeved version. Some believe the yellow shorts/sleeves to be a fade from an original green. This can happen and in some cases it is certainly a fade as examples in the middle of fading from green to yellow exist. There are others who believe that some early Robins were produced with yellow sleeves and shorts. This is supported by the cover of the Batcave box which pictures a Robin with yellow instead of green shorts/sleeves. This is one of those Mego mysteries that may never be solved to everyone’s satisfaction. There is a factory made reproduction of Robin’s tunic available. Made by Doctor Mego, this repro is made of similar red and yellow materials. It fits tighter though, and the sleeves are shorter and a lighter green than the standard Robin tunic. It is marked DM on the inside near the collar. 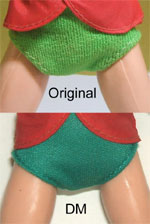 Like the tunic sleeves, there are a variety of original Robin shorts. The common version is green, which come in a couple different shades. There is also thought to be a yellow shorts/sleeve version. Some believe the yellow shorts/sleeves to be a fade from an original green. This can happen and in some cases it is certainly a fade as examples in the middle of fading from green to yellow exist. There are others who believe that some early Robins were produced with yellow sleeves and shorts. This is supported by the cover of the Batcave box which show pictures a Robin with yellow instead of green shorts/sleeves. This is one of those Mego mysteries that may never be solved to everyone’s satisfaction. There is a factory made reproduction of Robin’s shorts available. Made by Doctor Mego, this repro is very dark green compared to the originals and has a tighter weave of material. The shorts are unmarked.

There are a lot of high quality home made paper and cloth emblems out there, but Doc’s in the only factory made version. It’s a paper die cut and actually looks much cleaner than the original paper version, which tends to look like a bad print job.

Both Doc Mego and Classic TV Toys make gloves. DM gloves are textured similar to originals and marked DM on the inside cuff. CTVT’s are very slick and shiny compared to the originals and are unmarked. Both reproductions are shaped slightly different than original gloves.

Robin has three belt variations, cloth, translucent plastic and opaque plastic. Robin’s plastic belt also came in two lengths. At one point in time the belt was lengthed about a quarter of an inch. Doc Mego produced the only known factory made cloth Robin belt. It is a little more narrow, and little slicker, and a wider material weave. Doc Mego also makes the only translucent version repro and it is VERY close to the original. Close enough that you really have to look for the DM stamp on the back of the buckle. CTVT makes the only factory reproduction of the opaque belt, and like the DM belt, it is hard to spot. Look for the CTV printed on the back.

Both DM and CTVT have made shoes for Robin and both are hard to spot. DM’s are more cleaner looking with no flashing and a little softer material. They are marked DM on the inside. CTVT’s are more narrow and less “clean”. They don’t have the curve in the slant from the back of the foot opening to the front that original’s do. They are unmarked.

Early Robin’s came with a removable mask and finding an original is a tough task. Often the elastic is stretched out on an original so the mask no longer stays on the face. There is an off-white mesh on the inside of the mask and the outside is very shiny. Doc Mego makes a mask for Robin. The repro has a texture and is less shiny. It also has wider eyeholes and is flat across the top, producing a wing effect when the mask is on the head. It is marked DM.