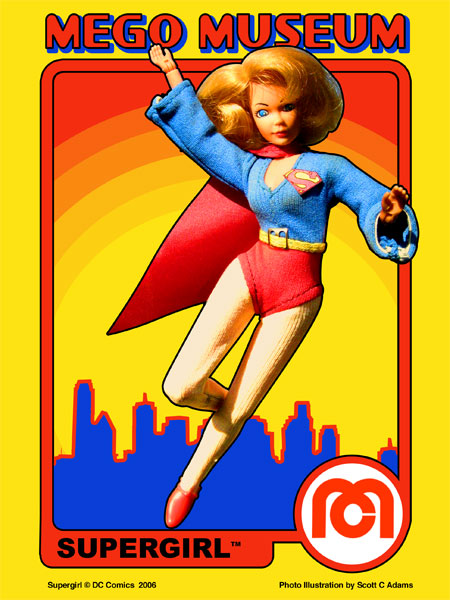 The cousin of Superman made her debut in the 1974 Supergals assortment along with her occasional team-mate Batgirl. The original run of these figures had an all silk screened outfit instead
of shoes in order to make it to store shelves for Christmas. 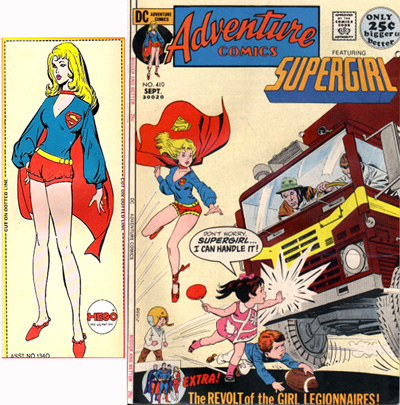 Supergirl’s art is taken directly from DC iconic clip art in use at the time, save the slippers have been added in place of the strap tied ballet slippers. The Mego costume is fairly accurate to the character as she as portrayed in the early 1970’s.

The many faces of Mego Supergirl, thanks to Dan for the pic assist. Mego included Supergirl in their Bend N Flex line in 1974 as well. 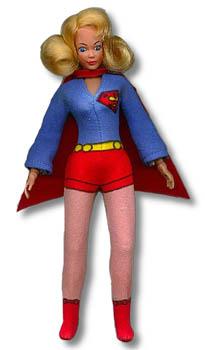 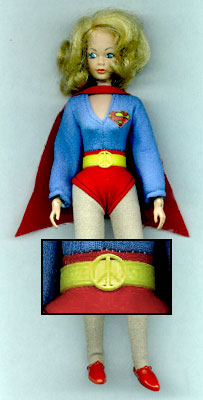 On the left is the Silk Screen Supergirl courtesy Steve Caballero. The insignia, belt, “booties” and even the cuffs of her sexy 70’s shorts are screened onto the jumpsuit. This is the earliest version of the figure and is highly sought after in mint shape. Next to it is the hard to find “Peace belt” version, using a yellow version of Dinah Mites belt, believed to be only produced in France, it is found on Pin Pin cards, courtesy of Jason. 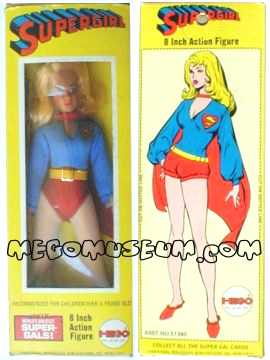 Supergirl in her Window Box, there are no known variants of the Supergals window box (pics from Tom) 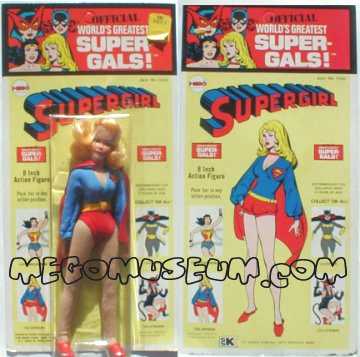 Supergirl on her Kresge Card. (Pic courtesy of Tom) 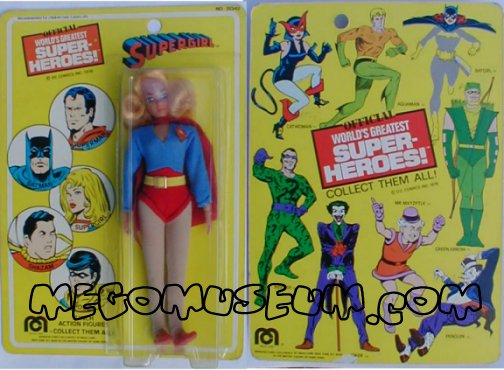 This is the Mego US carded Supergirl.

Supergirl was not released on a 1977 American card. 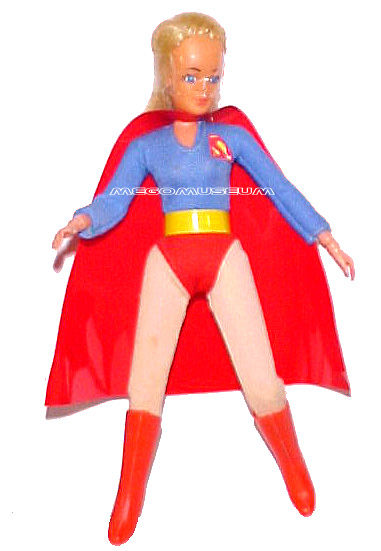 Lily Ledy (Mexico) produced their own take on Mego Supergirl, the
only variant to come with boots. She was known as “Supernina”. 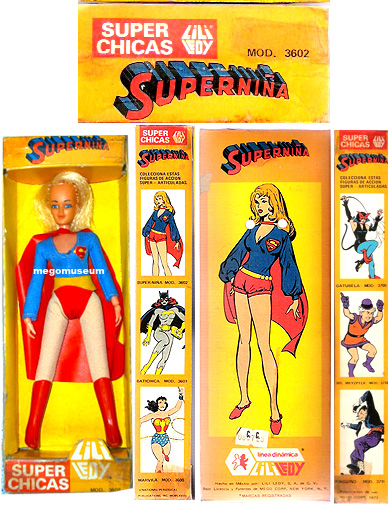 Collect all the Super Gal Cards! You can trace this artwork at Mego Comic Book Origins 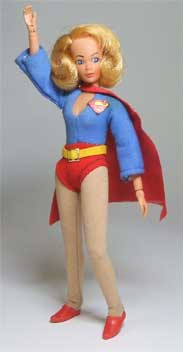 Supergirl’s cape is unique to the character and has not been factory reproduced. There is a variation in material that has been recently discovered and you can see it in the pic of the carded figure. It’s a vinyl version of the cape similar to the material of Thor’s vinyl variant. It is original issue, although very rare.

An original Supergirl emblem is only available in cloth. There are a lot of high quality home made paper and cloth emblems out there, but Doc’s in the only factory made version. It’s a paper die cut.

Supergirl has two belt variations, a cloth belt and a plastic peace symbol belt. Doc Mego produced the only known factory made reproduction belt for Supergirl and it is of the cloth variation. It is a little more narrow, a little slicker and a wider material weave.

Supergirl shoes are unique to the character and there is a factory reproduction version made by Doc Mego. The reproductions are very close to the originals. The slight difference is around the foot opening. The repro has a little larger opening, and has less of a curve around the opening. They are marked DM in side the shoe.

Supergirl’s head has been reproduced by Doc Mego. The biggest difference is the overall shape of the head, it’s a little more narrow. The hairline is also a little different, and the hair curls inward instead of outward. The reproduction is stamped DM on the back of the head under the hair.