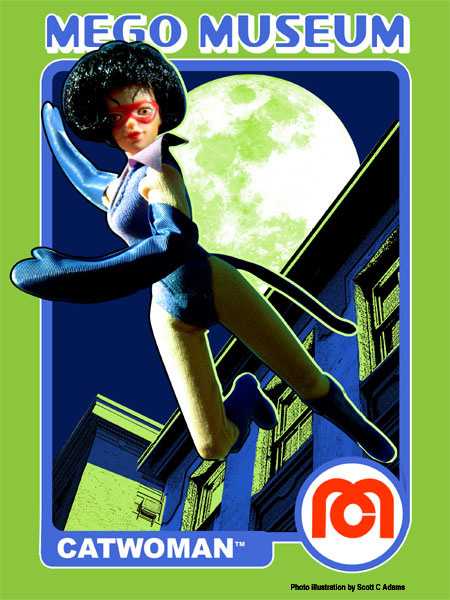 Catwoman’s popularity had risen to new heights thanks to Julie Newmar’s interpretation on the 60’s Batman television series, so it seemed a natural for Mego to add her to the  1974 Supergals lineup. 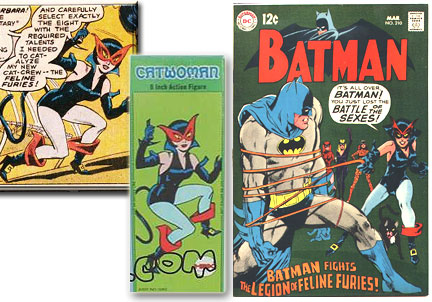 The question of her being a Supergal as opposed to a Superfoe seemed to suggest that gender outweighed criminal intent. Her costume choice however is not generallly thought of as classic Catwoman attire. The “pirate outfit” as it is commonly referred to, was an early seventies attempt to change the look of the character.
Catwoman only made a few appearances in this outfit before it was abandoned for a more traditional outfit but it was long enough for Mego to base the figure on this look!
Learn all about the Comic Book Origins of Mego Art in the MegoLibrary.

Mego Catwoman’s Hairdo seems to vary widely, from short n sassy, to curly-flippy. Those are technical terms, yes. Also, boots come in flat heels (above) and high heels (left). The flat version is shared with a Dinah-Mite outfit, Super Suede. 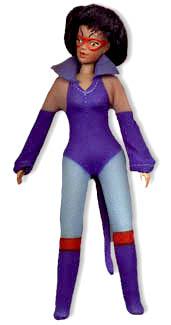 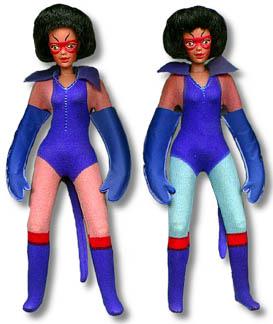 There were three versions of the Mego Painted Suit Catwoman,the early variation that preceded the one at the top of the page. On the right and in the middle we have the blue and flesh tights versions, provided by the very handy Steve Caballero. To the left we have one supplied by Andrew Murray . Andrew assures me that his has gloves, he just sent a scan to show the arms. She looks fine without them though,don’t you think? Also, I must point out that these figures were made on 2 different scanners and the obvious color differences here are due to the scanners. The blue on the PS CW is pretty darn blue, not purply, but the regular Mego Catwoman is purply(but seems to fade kinda funny, a little patchy. She may havebeen more blue originally…sigh…whew)

Catwoman should always have gloves, boots were not issued on early silk screeened versions but did come briefly later. A silk screened Catwoman without boots should be considered complete. 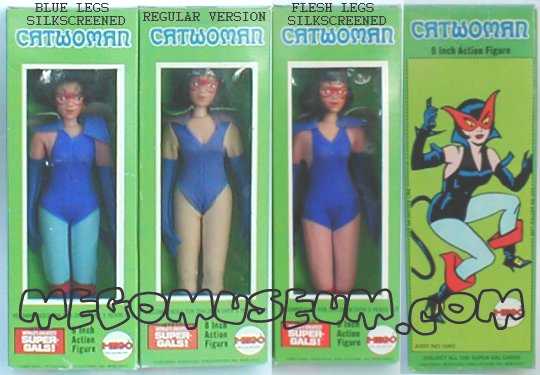 The many variations of Boxed Catwoman courtesy of Tom. The artwork for the backer has been traced to a specific issue of
Batman . For more information click on  Mego Comic Book Origins 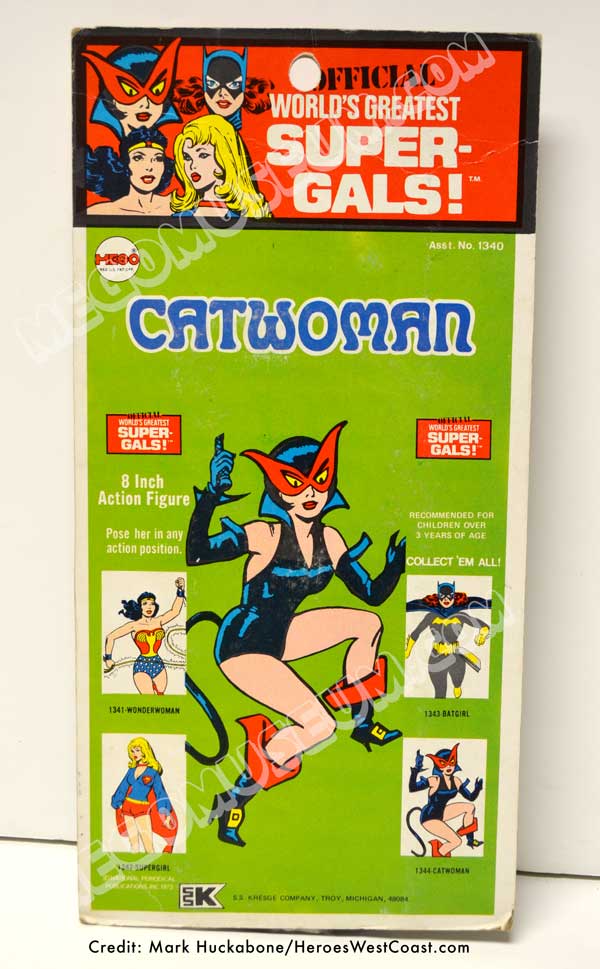 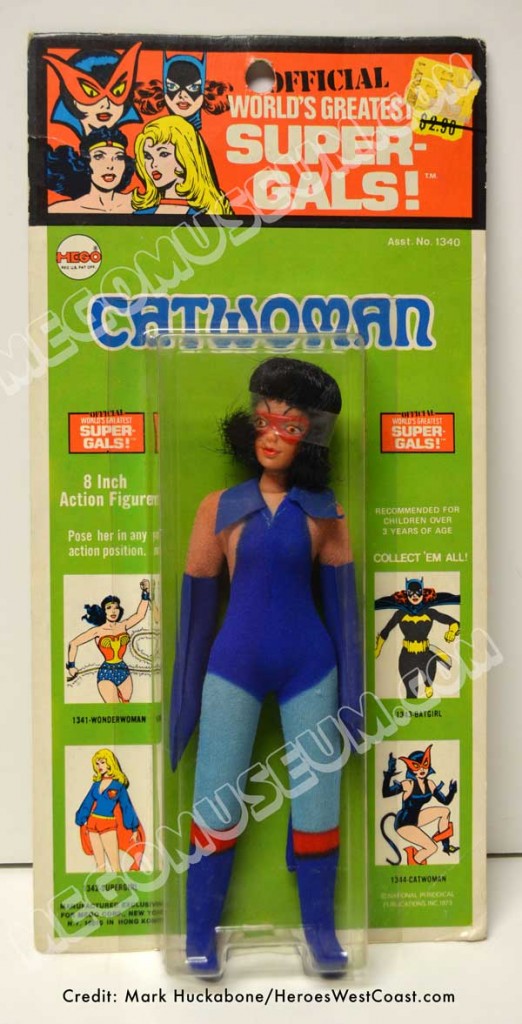 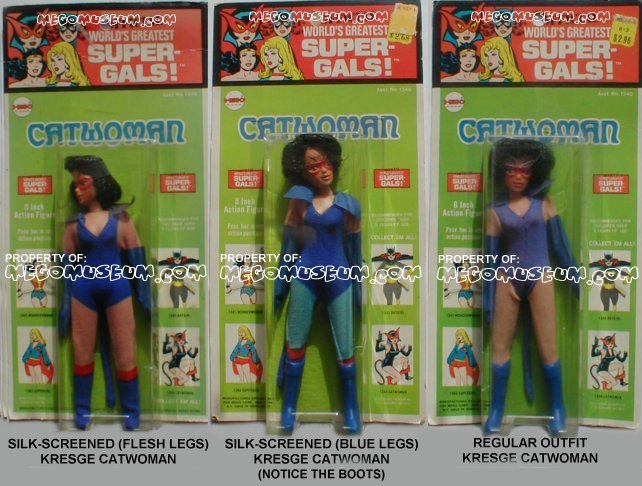 Kresge Carded Catwoman, it’s interesting to note the price tag variants alongside the many outfit changes. (Courtesy of Tom) 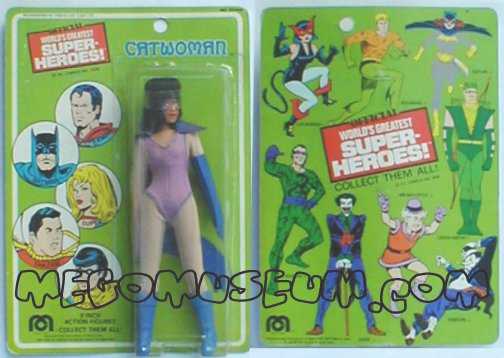 Catwoman is one of the more difficult WGSH to find on the card, in terms of Supergals, only Wonder Woman is more difficult, but then again, that goes for everything! (Pics thanks to Tom)

Catwoman was known as “Guatubela” in the Lili Ledy line and she difficult to find loose, forget about boxed! Pic from  Foreign Mego Archive. Mego included Catwoman in their Bend N Flex line in 1974 as well. 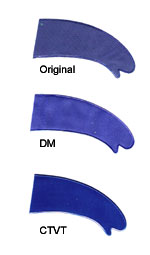 Catwoman had two styles of boots, high heal and flat heal. The high heal version has a slanted cuff. Doc Mego makes the only factory made reproduction boots for Catwoman and they are of the high heal version. The blue is a little brighter and more solid on the repros. Overall it’s also a little shorter. It is stamped DM on the bottom.