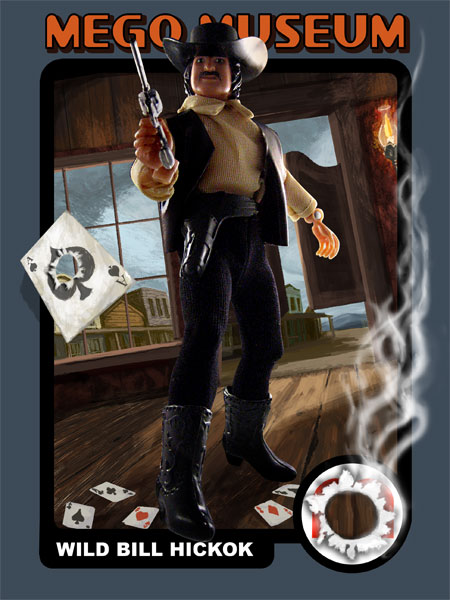 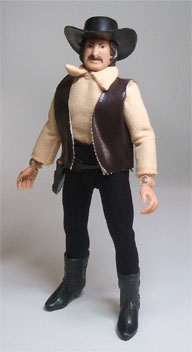 The famous lawman and gunfighter got the Mego treatment for this
series, complete with a solitary six gun.

Mego reused Bill’s headsculpt for the Black Knight
in the Super
Knights line.

Another eye-catching box for this line, my favourite of the series.

Wild Bill also came on a Kresge card and later a Lionrock card. 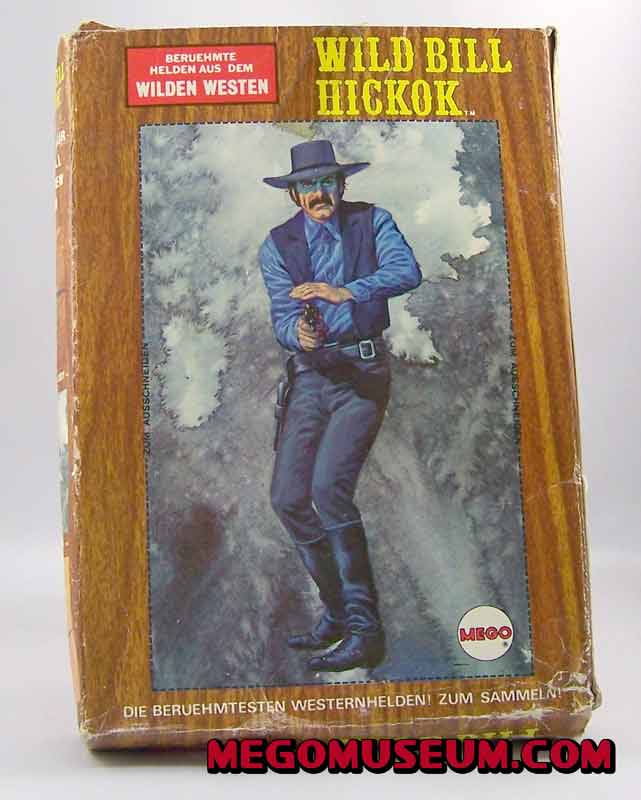 In Germany, the American West were issued in 3 different two packs.
These are very rarely seen, here is side one. 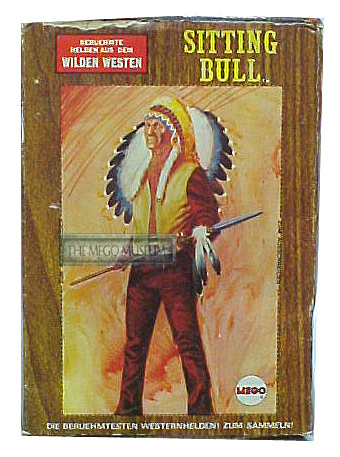 And this is side two, the characters fit rather snugly
inside. 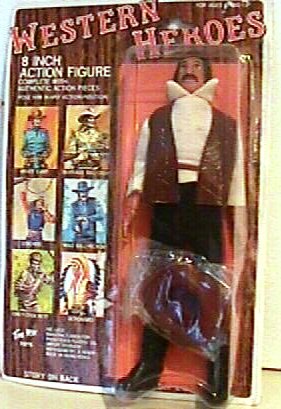 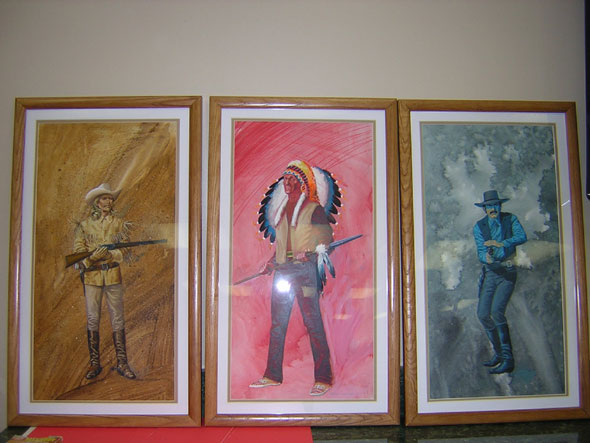 The original Gray Morrow artwork is signifigantly larger than the packaging itself. Morrow also did the art for the Mad Monster Series. Photo courtesy of Ron.

Wild Bill wears an off white shirt made of a thin almost mesh like material. The original Mego shirt has a variation. The variant is a little thinner and more transparent. It also borders on the tan side of offwhite. This shirt has been reproduced by Classic TV Toys. The reproduction is closer to the more transparent original. It is a little more white and has a shorter collar. The CTVT has velcro to secure the shirt instead of the snaps that Mego used. The western line was also reproduced during the Mego era by Tim Mee Toys. These are vintage reproductions of the Mego Western figures. In the case of the Tim Mee Wild Bill shirt, It is also a little more on the white side, a touch thicker in material and also has a shorter collar. Again, this one has velcro to secure it instead of snaps. Both repro’d are unmarked.

Wild Bill wears black stretchy pants. These pants have been reproduced by CTVT. The reproductions have a bit of a shine to them and fit a little more snug. The Tim Mee vintage reproduction version is made of a similar material with the same look as the originals, just sewn lower in the crotch. Both are unmarked. 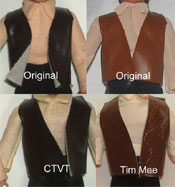 Bill sports a leather looking vest of brown. The original vest came in different shades of brown from dark brown to a carmel color. This vest has been reproducted by CTVT. The CTVT is cut a little wider in the shoulders and all the way down. The material is also a touch thicker. The vintage Tim Mee reproduction is thicker and more glossy. The texture is also more pronounced on the Tim Mee version. Both repro’s are unmarked. One additional other way to ID the repro vest is the inside thread color. Mego used black thread while both CTVT and Tim Mee used white.

Wild Bill wears a black hat that is unique to the character. This hat has been reproduced by CTVT. The reproduction has a higher gloss, and a larger crown for the head. It is marked CTV on the inside. The Tim Mee vintage reissue is easy to spot, like all of Tim Mee’s western hats, it is brown. Otherwise it is an exact reproduction.

The Wild Bill hoslter belt is made from the same mold as the Action Jackson western belt, except in black. This belt in this color has been reproduced by CTVT as well. The detail on the CTVT belt is a little more dull and there is flashing evident. It is marked CTV on the back. Tim Mee also reproduced the holster during the Mego era. This is a vintage piece and made from the Mego molds. It is idential in all ways except in color. The Tim Mee hoslter is a dark brown.

Wild Bill has the same pistol as the rest of the Western gang and many of the Willer characters. The pistol has been reproduced by CTVT. The detail on the reproduction isn’t quite as sharp as on the original and flashing is evident. Some are marked CTV on the gun grip and some are unmarked. Tim Mee reproduced the pistol. This is a vintage piece, reproduced during the Mego era. Same mold, just in gray instead of chrome. Otherwise it’s identical.

Wild Bill shares a head sculpt and paint job with the Black Knight from the knights line. The head has been reproduced by CTVT. The repro is a softer material, a little duller in features, and the paint job varies, especially in the eyes which are painted larger. The head was also reproduced during the Mego era by Tim Mee Toys for the western line. The Tim Mee head is a vintage reproduction and the biggest difference is material. It’s a little softer. A big visual giveaway is the white dots in the eyes. All repro heads are unmarked.