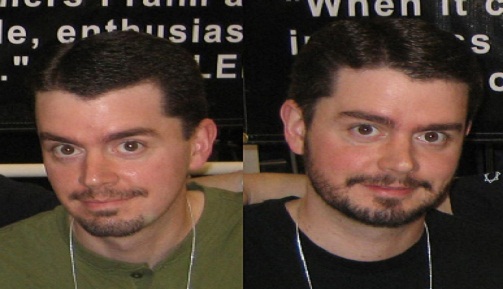 CM: Brothers is a first for CM. Any Personal Info you are willing to share: (Twins, or who is oldest...married? Kids? Pets? Occupation? Where from? Other hobbies,/Interests?).

BF: We are identical twin illustrators that have been working in the comic book industry since 1997, when Sean McKeever's the waiting place was first published by Slave labor Graphics. Since then, we have continued to work on such projects as Knights of the Dinner Table: Illustrated from Kenzer & Co., the webcomic AMERICA JR. which was collected into a volume published by Image Comics, the illustrations in Evan Kuhlman's novel Wolf Boy published by Random House, we illustrated the weekly comic strip Antiques: The Comic Strip that was published by the Antique Trader and then collected in book form by Gemstone Publishing (which was nominated for two Harvey Awards), and the three issue series The ODD Squad from Devil's Due Publishing. Currently, we are illustrating Vampire, PA from Moonstone Publishing with issue #3 out in October. We are also well known for our work on role-playing games. For Kenzer & Co., we have done more illustrations than any other artists for the HACKMASTER RPG. We have also done work for Atlas Games, Goodman Games, among others. Currently, we do several illustrations mainly for the HERO SYSTEM 6th EDITION from Hero Games. We also do original art commissions for fans which you can see at our website www.brosfraim.com and at http://comicartcommissions.com/Fraim.html We live in south east Pennsylvania, are single, and don't have any pets. Brendon is the older twin by about 6 minutes. And if you are wondering which one of us is the evil twin, the answer is simple. We're both evil.

CM: How did you both get started collecting mego?

BF: We are both big comic book collectors, with Captain America being Brendon's favorite and Iron Man being Brian's favorite. So in collecting our favorite character's memorabilia, we came to purchase their Mego figures. We have those figures Mint-in-Box, as well as loose, and Brendon has a Cap Mint-on-card. And the "Mego fever" grew from there! The great book by Benjamin Holocomb, Mego 8" Super-Heroes: World's Greatest Toys!, helped fuel the fires too!

BF: The World's Greatest Super-Heroes of course! We also dig the Flash Gordon figures they made in the 9.5 inch scale and have all of those including the playset.

CM: What are, in your opinions, the biggest "holes" in Mego's original lines? (What figure or figure line is missing that should have been done?).

BF: Green Lantern and the Flash, hands down. They would have been easy to make!

CM: What motivated you both to start customizing? Do you do any solo project, or are all the figures collaborations? What was your first custom?

BF: We started customizing for the fun of creating the figure. We feel customizing is like painting and building models, except we get to play with the finished product! The figures we make are usually made by one of us or the other, we rarely collaborate. Brendon customizes the characters he likes more and Brian does the ones he likes. Or we just have to fairly distribute the figures we both want to do, like our New Gods customs where we both want to do each figure. Another aspect of our customizing is the fact that we try to keep our figures looking like they would have been made by Mego back in the day. They may not be 100% accurate to what the figure looks like in the comics, but they look like you could have bought them off the Mego rack. It all began when Brian Leitner had an accurate Captain America costume for sale on eBay which Brendon couldn't pass up.

CM: How did Cap turn out, looking back on it now?

BF: It came out great and still looks good. Heck, Brian Leitner did all the hard stuff making the suit, Brendon just put it together!

BF: We both believe in "learn by doing." We have learned a lot and have gotten a lot of great tips from the Mego Museum message boards. We both have equal skills with our customizing. Our artistic backgrounds have really helped us with doing the head paints.

BF: Well, since we have most of the suits pre-made and heads molded for us, we'll have to go with painting the heads. It's all we've got!

BF: We both have to say it's our Big Barda. It may not be our best work, but it is definitely Brian Leitner's best work. If it's a head paint, we'd have to say our Captain Britain, Kalibak and the Mandarin.

BF: They're just the characters we enjoy the most.

CM: What resources make it easier for you as customizers?

BF: As we've stated, we buy custom suits from Brian Leitner and the repro body parts and accessories from Dr. Mego. The heads are from Austin Hough and the Black Knight.

BF: It helps keep the Mego legacy around. As long as people are making these custom figures in the spirit of the Mego figures of the 1970s, Mego will never go away.

BF: Buy your custom suits from Brian Leitner and your custom heads from Austin Hough and the Black Knight.

BF: We occasionally will sell an extra set of boots or something like that, but we don't make and sell custom figures. We just like to make the figures for ourselves.

BF: We just wanted to state that we really appreciate the opportunity to be the Customizer(s) of the Month. We're not sure we deserve it, though. Our customs look so good because of the heads and suits we have made for us. So this is as much a show of appreciation for Brian Leitner, Austin Hough, The Black Knight and Dr. Mego, as it is for us.

CM: Thanks for your participation guys!!