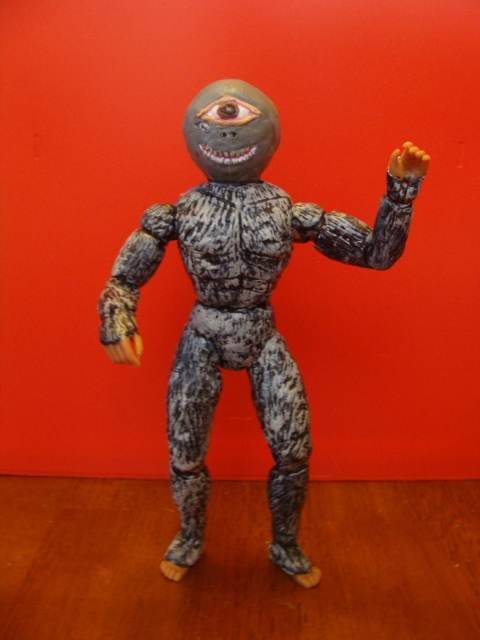 JR: I was born,grew up, and currently live in Queens,NYC.I am married to Tomoko and we have two daughters ages 7 and 4 months.I have been making and selling my hand-made art-work for over 15 years now. At the moment I am once again working full time selling my hand-made art-work(sculpture,miniatures,action-figures etc.).As you can probably tell from my Screen Name and my most recent Custom action figures,I am very interested in Japanese folklore,especially the Yokai(Japanese Monsters & Spirits),which is a continuation of my life-long interest in all sorts of Monsters and folklore. What a Yokai is: Yokai(??, literally demon, spirit, or monster) are a kind of super-natural creatures in Japanese folklore ranging from the evil Oni (demon/ogre) to the mischievous shape-shifting kitsune (fox). Some possess part animal and part human features (e.g. Kappa and Tengu). Y?kai that have the ability to shape-shift are called obake.Henge are shape-shifting animals(Kistsune,Tanuki,Mujina,etc.)and Tsukumogami are an entire class of obake-yokai, comprising ordinary household items that have come to life on the one-hundredth anniversary of their creation. This virtually unlimited classification includes Bakezouri (straw sandals), Karakasa (old umbrellas), Kameosa (old sake jars), and Morinji-no-kama (tea kettles). There are also a large number of y?kai which were originally ordinary human beings, transformed into something horrific and grotesque usually by some sort of extreme emotional state. Women suffering from intense jealousy, for example, were thought to transform into the female oni represented by hannya masks. Other examples of human transformations or humanoid y?kai are the rokuro-kubi (humans able to elongate their necks during the night), the ohaguro-bettari (a figure, usually female, that turns to reveal a face with only a blackened mouth), futakuchi-onna (a woman with a voracious extra mouth on the back of her head), and dorotab? (the risen corpse of a farmer, who haunts his abused land), among many others. A great place to learn more about yokai is : The Obakemono Project at www.obakemono.com You can find some my custom action figures for sale in my shop : www.yokaijohn.etsy.com I also have a business page on Facebook www.yokaijohnsculptures.facebook.com

JR:As a kid I had many Mego action figures,I had some figures from every 1/9th scale line Mego made and between my younger brother and I we had the whole POTA action figure line(including most of the playsets and accessories).Sadly I gave away all my Mego action figures to The Salvation Army when I was 16.Currently I have one original Mego Action figure,a Mego Hulk that I bought on Ebay a couple of years ago.

JR: My favorite original Mego action figure I would have to say would be The Startrek Andorian and my favorite line would have to be POTA folowed closely by the Mad Monsters line.

JR: I think it would have been great if Mego had gotten the rights to do the Classic Universal Monsters for their Monster Line.And I really would have liked to have had a Taylor and a Nova for the POTA line.

JR: My friends at the store where I used to sell my sculpture and other handiworks asked me to make some custom Barbie dolls to sell in the store.So my first Custom action figure you could say would be a Giraffe-Barbie.I guess it came out pretty good because someone liked it enough to buy it.Unfortunately I never got any pics of my custom Barbies and they all sold long ago.I only got into making 1/9th scale Mego-like action figure customs in the fall of 2008,after having been a fan of the Mego Museum for about 4 years(since 2004 when I had first discovered the Mego Museum).I've kind of been hooked on 1/9th scale for my Custom action figures ever since(I'd done both larger and smaller scales before in the past).

JR:I have learned that mod-podge works just as great on clay as it does on paper.

JR: I guess you could say sculpting is my strongest point and it is my favorite part.I have been sculpting since I was a kid(of 11)when I would convert my Ho-scale Action figures with Contour putty.

JR: My favorite custom would be any of my Yokai.I was particularly pleased with how my Ao-Bouzu(the Blue Monk)Yokai turned out and really loved the Kimono my wife Tomoko made for him.

JR: DocMego(Emce,etc.),Castaway,and CTVT are all a great source for bodies, parts, and accessories(I have bought from them in the past and I highly recommend them all.) Mego Museum is another great resource for 1/9th scale customizers and it has and continues to inspire me to create more 1/9th scale custom action figures.

JR: The rest of the Main Yokai(I'm up to about 40 now and there's at least 100 main Yokai).And I would like to finish a few other customs I started a while back(mostly LOTR themed.)

JR: I think customizing affects the Mego collecting Hobby in a very positive way and brings it to a whole other level of fun.

JR: My family is very supportive of my Customizing and sculpting work.Sometimes my wife will even make an outfit or two (she's really helped some of my customs turn out extra special)when she has some free time and my older daughter likes to help with the paints from time to time and recently she even sculpted the the little Cucumber accessory(which I think she did a great job on,I think she might be a better sculptor then her dad some day)for my Kappa003.

JR: I have seen so many great customs here on the MegoMuseum its very hard to choose.Some of my favorite customs have been from John Farley(Type3Toys), Joe Hanus(Thunderbolt), Sandy Collora, Matt Jaycox, Todd Waters, Wayne Kew, Mike Oz, Alberto Malnotti, Thomas Meuleman, Cat Gough, Jessica Rotich, and Jason The BlackKnight. There are so many other talented people here as well.

JR: Yes,and most of my recent custom action figures are for sale in my shop on Etsy @ www.yokaijohn.etsy.com .

JR: It is a great honor to me to have been chosen customizer of the month,and I am very proud of all my Yokai Children.

CM: Thanks for your participation John!!