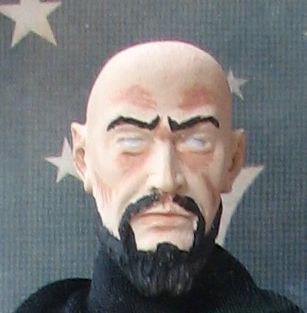 GB: I was born in Massachusetts, but grew up mostly in Indiana where I live now with my wife and my two kids (Mina, 5, and Sean, 3). I'm a stay at home Dad, but I studied to be an English teacher. I like to do some woodworking and I write. I've published thirteen short stories, mostly horror and a few science fiction, and I've written a few novels, none of them published.

GB: Probably the same as everyone else. I had quite a few when I was a kid. Odd enough, I think that I had quite a few repeats, lots of Batman and Superman. I don't know if they got lost and I just got more or what. By the time I discovered Ebay, Megos were on the expensive side, so I mostly just bought vintage parts to repair the ones I have, my favorite was my twelve inch Captain America.

GB: As a kid it would have been Superman or Batman and the superheros line. I've been a superhero guy since I was old enough to watch Adam West and George Reeves. I really loved the Empire Batcopter (which I've only just discovered wasn't manufactured by Mego) and the Mobile BatLab van.

GB: Spider-Woman! Jessica Drew, baby. I loved that cartoon as a kid and would have been all over a Mego. I don't think I had any female figures. Except for superhero stickers in Crackerjacks, I wasn't aware of a lot of characters, but Hanna-Barbera superheros would have been nice...Blue Falcon...Space Ghost...oh, man, Space Ghost!

GB: The internet is to blame! I saw all these AMAZING customs online, especially at the Mego Museum and I was totally hooked on the idea. What I DIDN'T realize though, is that the customizers weren't using all vintage parts. I couldn't afford to buy old Megos to work with, so I wound up picking up Famous Covers figures for nothing at KB Toys. I hardly ever finish anything. My first attempt was a 12 inch G.I. Joe Miracleman that I made my wife sew, but she lost interest and told me to learn how to sew myself. My wife can sew and she tried to teach me, but I got a lot of help from a tutorial on Nick Robinson's site The Toy Box. My first finished custom would have been this Iron Man. He was the state-of-the-art of what I could do at that time. I found a head that looked like Tony Stark and tried to sew an Iron Man mask. Shiny gold fabric didn't hurt.

GB: ? I've started painting heads, casting in resin, and being more creative with parts. I've learned that you can bring some of your self to characters and that is okay. I still need to learn to use a sewing machine.

GB: I love coming up with stuff that I haven't seen done before, like my carnival fortune teller machine. I love taking pictures of my figures and building set pieces/props...my Contraptions!

GB: I notice that I tend to do more obscure stuff. Monsters, villains and obscure superheroes. I don't sculpt my own heads or build my own bodies, so it is hard to compete with some of the greats, so I try to go my own way and figure out something different.

GB: Ebay is pretty wonderful. I've got a lot of great deals through the Marketplace here at the Museum. I've also got a lot of help and stuff from other customizers. I can't imagine customizing without the internet, though. I usually do bigger scale figures, but I prefer the Mego design sense.

GB: I think it really adds to the hobby. I mean, how man RC Batman's can you buy, really. It is so nice to be able to buy/make something totally off the wall and out of the. Customizing lets you chase your hearts desire. Plastic desire, but still.

GB: My wife calls the dresser that I store my custom fodder in my "morgue", so she's pretty cool with it. We're a pretty crafty creative family, so its all good in the 'hood.

GB: I'm a huge fan of Thunderbolt's. I think he is one of the most creative customizers out there. Black Knight's work is perfect...perfect. Randomaxe makes some of the best original customs that I have ever seen. Type3Toys...detail beyond detail. Now, the customizers that got me hooked, some of the older school people, I don't know their names, but they got me started in this direction so...thanks you guys!

GB: See what other people are doing, especially your favorites and figure out how its done. Challenge yourself and see what is possible. Learn to sew on a sewing machine.

GB: I've sold and traded some of my contraptions with people on the forums and that is some of the most satisfying things that I've done in this hobby. Everything I make for myself and for someone else to share that aesthetic it is pretty trippy.

GB: Thanks for featuring my work!

CM: Thanks for your participation Gary!!