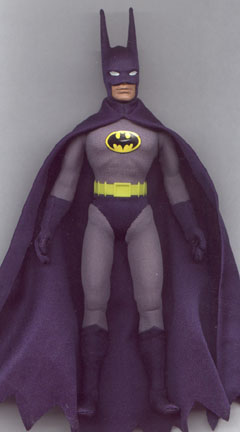 CM: Any Personal Info you are willing to share: (married? Kids? Pets? Occupation? Where from? Other hobbies,/Interests?).

SM: I'm an educator at the local college (just celebrated my 20th year there) who still actively collects action figures, mostly super hero and science fiction based properties. I'm thrilled to see the Mego style making a comeback now. I'm a lifelong comics fan, though I've cut back a lot on that of late. Haven't outgrown comic books, but the present day fair doesn't offer a lot I'm interested in.

SM: One birthday, my mother got me a new action figure, something I hadn't seen or asked for. It reminded her of my GI Joes, but she said she could take it back if I didn't like it. It was an early Action Jackson figure, and, needless to say, it didn't get returned and started a lifelong love of the 8" figures.

CM: What is your favorite original mego figure and line?

SM: World's Greatest Super-Heroes was my big thing, the line that really got me into action figures big time. Even lines like the Star Trek aliens wound up being integrated into the WGSH universe. It was a time when you could do something you really haven't been able to do since: have something like the Justice League and Fantastic Four regularly team up all in the exact same style of figure. It was great to watch the Super Friends on Saturday morning and then have an adventure of my own that afternoon. As far as my favorite Mego, it's probably Green Arrow. To this day, I've never seen a head sculpt for the character capture his personality so perfectly. Cornelius from Planet of the Apes is a close second, though, simply because that wistful look on his face is just so perfect for the character .

CM: What is, in your opinion, the biggest "hole" in mego's original lines. (what figure or figure line is missing that should have been done).

SM: Definitely Green Lantern, as he's actually pictured on the Hall of Justice. I've never understood how GL got left out and Green Arrow, who required more accessories and was doubtless more expensive to produce, got made. Flash has to be up there, as well, especially considering we got Kid Flash!

CM: What motivated you to start customizing, and what was your first custom?

SM: The aforementioned holes in the line. I couldn't keep having Justice League adventures without my favorite hero, Green Lantern, or his good friend, Flash. I also loved guys like Red Tornado and Elongated Man, who, again, had no figure. My earliest almost-custom was a kit-bashed horror that took a cut down Bat-mask, a Supes top with Bat trunks and legs and blue boots, with a lightning bolt stuck on the front to be the Flash. That didn't last long as I wasn't at all satisfied, so my grandmother agreed to cut out and sew a black body suit for me (both my mom and grandmother actually made most of their own clothes, which is where I learned to sew). Using construction paper and tape, I put together a crude Green Lantern out of a Superman.

SM: Originally, most of the stuff was paper and tape over a material bodysuit, but gradually the paper gave way to more material. Over the years I gradually learned to sew myself, though in an odd fashion. I don't make the costumes "the right way," namely sewing them on the inside all around and then turning them inside out. I overhand the pieces together right on the figure, and I've never changed that even as I learned to do it the other way. It allows me to really fit the costumes right to the figure, especially things like where the legs meet the trunks. It also allows me to add things to the basic suit that would be very difficult to do in exactly the right place if it wasn't right on the figure.

SM: My favorite has to be Green Lantern, as I've re-done him probably a dozen or more times over the years, mainly because he's my favorite super-hero. My best work, what I'm proudest of, is a set: my Legion of Super Heroes. I sat down one day and started, and kept working until I had about 30 figures done. I'd never before, and have never since, been able to focus one project like that for so long.

SM: 99.9% of the time, it's because of the characters. I want a figure of them. I have done a few, like Ghost Rider, simply because I love the look of the character so much and think it would make a great figure.

CM: What are your favorite customs others have done and why?

SM: So, so many talented folks I've seen work from over the years. I had the honor of meeting and talking with Charlee Flatt on several occasions at the Florida FX show (a mutual friend made sure we hooked up), and found I loved his fantastic work even more after finding he was as good a guy as he was a customizer. He couldn't wait to show me the latest stuff he'd made with the genuine excitement of someone who was having a ball with what he was doing..

SM: Sadly, I haven't had much time in recent years to break down and make some new figures. One thing I had started on a couple of times was to do a set of Flash Gordon figures, mostly based on the 70's Filmation cartoon. Still haven't gotten around to much more than preliminary work on that, though.

SM: I'd say it's had a major effect, and it's a big reason that the style is making a comeback. The idea of the new DC Retro Heroes from Mattel had to come, at least in part, from what so many folks have been doing filling the holes Mego left. It's no accident that the customizers best friend, Doc Mego, is involved.

CM: Any tips or words of customizing advise to new customizers?

SM: The most important thing is to do what you're passionate about. Customizing is a time consuming process, and I know I've started a few figures and never finished because I lost interest in the project. Also, keep an eye open for things you may need in the future, even if it's something you're planning down the road. Over thirty plus years, I've found the kind of material I use in a bright, Green Lantern green, a grand total of three times. If you pass on something, you may not see it again for a long while, so always think long term.

CM: Do you sell custom figures or parts? If so, why?

SM: I used to do so for trades, mainly loose figures I could use for customs, but it started taking time I didn't really have.

CM: What do your family/friends think of your mego custom work/hobby?

SM: The family and friends accepted it long ago, and my co-workers have discovered over time about that part of my hobby. The response has been overwhelmingly positive; a lot of the stigma toy collectors used to face has faded. Collecting in general has become more mainstream, and folks seem more open to seeing people making their own figures, as well.

CM: Thanks for your participation Scott!!